Every once in a while, a band pops up out of nowhere, instantly leaving an impression. 18 Miles from Heerhugowaard/Uitgeest in the North-West of The Netherlands recently published a video for their new track ‘Pushing Forward’ on YouTube and Facebook, that will appeal to fans of Terror, The Ghost Inside and ‘Damage Done’-era No Turning Back. Rik contacted singer Daan to have a chat about future plans, dreams versus obligations and touching cows.

You guys totally surprised me with your video for the track Pushing Forward, but apparently 18 Miles has been around for about two years. Under what rock have you guys been hiding? What have we missed so far?

The past two years we’ve been screwing around a little due to school and other bands we play in. 18 Miles was actually formed to be a side project just for fun, but now that we’ve got so much good responses for Pushing Forward, we want to see if we can step things up a bit.

In 2011 you released an EP called Lessons. Pushing Forward to me sounds a lot more ‘hardcore’ than those earlier songs. Was this a deliberate choice? How has 18 Miles changed and/or grown as a band since that first release?

Pushing Forward certainly differs from our previous material on Lessons. This wasn’t really a choice, since we just write and play what we’re into. Therefore we wouldn’t even be able to create another record with the same vibe as Lessons, because we’d be forced to do something. One thing that is for sure is that there will be much more fast paced hardcore-ish parts on our upcoming full length Darker Times than on Lessons.

Between Lessons and the upcoming release we had a minor line-up change. Our original guitarist Keith Dick could no longer afford a side-project beside his main band To Heaven Earth Is Hell, as they were playing shows almost every weekend. Because of this, our friend Jelmer Groenland took his place in the band. I knew Jelmer had been listening to Lessons about a 1000 times or something and he was really motivated to be in a band. This is a choice we certainly don’t regret.

Sometimes it seems almost impossible to chase your dreams beside of all your obligations in life. That is something that pisses me off, especially when the people in my nearest surroundings are discouraging me to fight for my dreams, telling me to quit, telling me to write pop music, because ‘it will never happen’. Fuck that. I’d rather die poor with the best memories than be rich and fail myself on this.

A lot of older people in the scene often state that young bands lack a certain drive and conviction in their music. They think that kids just aren’t angry anymore. Your new song however sounds pissed off as hell. Where does this drive come from? What does a young lad from the North-West of the Netherlands have to be so angry about?

Well, the actual drive for Pushing Forward is the conflict between following your dreams and meeting obligations. I started to make music at quite a young age, because I’ve always wanted to thrash stages. I’m still young but the ambitions that I have have already caused me problems for so many times. Sometimes it seems almost impossible to chase your dreams beside of all your obligations in life. That is something that pisses me off, especially when the people in my nearest surroundings are discouraging me to fight for my dreams, telling me to quit, telling me to write pop music, because ‘it will never happen’. Fuck that. I’d rather die poor with the best memories than be rich and fail myself on this. Pushing Forward is about making choices and sacrifices to do what you love, even though you sometimes have to mess up other things badly.

I understand the video for Pushing Forward is a prelude to an upcoming new album. What can you tell me about that?

Pushing Forward will appear on our upcoming full-length called Darker Times, coming out early 2013. It will  probably contain around 11 tracks and just as our EP, I will produce this entire record myself. As I mentioned earlier, there will be more fast paced stuff and some tracks have in a certain way some more melodic aspects. The title of the album really refers to the lyrical subjects. Fucked up experiences, fucked up people, just the darker times in life.

The whole production is a D.I.Y. thing. The first time I did an attempt at recording and mixing was with the production of Lessons in 2010. Ever since I wanted to get better at it. I worked my ass off and I’m really glad about how Pushing Forward turned out and how the rest of the new record will sound. In my opinion it’s a major improvement on the sound of the EP.

When releasing an album these days, a physical release on vinyl or cd seems not to be the first choice for bands anymore. Free downloads and social media presence seem the way to go. Record labels are becoming less and less important, especially for younger, smaller bands. How do you feel about this and what are your plans for your own release?

There’s nothing cooler than having a physical copy of your own album. Unfortunately, it’s quite expensive for a small band to get this done, certainly if you consider that shirts sell a lot faster. Though I think that in the end, for profit over a longer time, it would be wise to get your album printed. Record labels are still important and I think it can be really useful when you get signed to the right label. In that way you should be able to reach people you otherwise wouldn’t have reached. And besides that, I think most people unconsciously make a difference in ‘small’ or ‘large’ bands according to whether they’re signed or not.
I really hope we can print Darker Times one day. 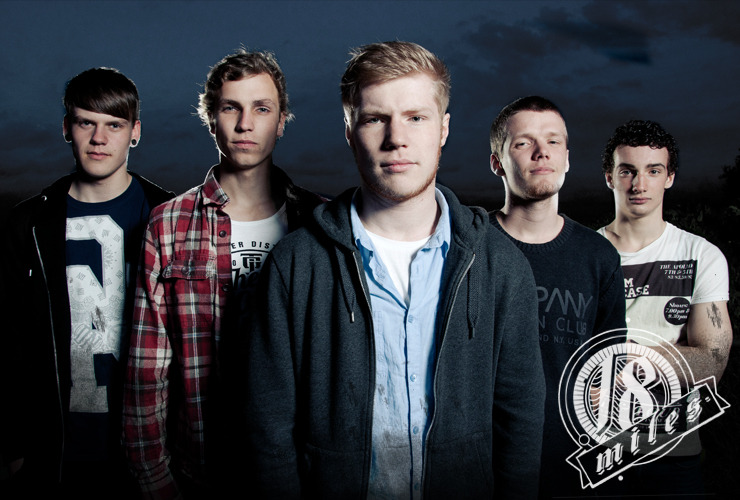 Mick decided he should touch a cow he saw behind a fence. It was hilarious, especially when the cow’s sisterhood came for backup and Mick got surrounded by 40 or 50 cows.

From a personal point of view, can you try to explain what it means to you being in this band? What would you be doing with your weekends if you weren’t?

18 Miles means a lot to me. I really need to be involved with heavy music. It has grown for me to be a release for my aggression and stress. For me personally, if I wouldn’t be in 18 Miles I would be working on my other band Barren Grounds or go to local shows. Of course, supporting your locals is very important.

Every band has a story that gets retold and relived over and over during rehearsals or in the van. What epic adventure will your band mates smack you in the head for, because you told it to this curious interviewer? 😉

Haha, well, in a jolly mood we once stole the nameplate from a village called Wortel (which means ‘carrot’ in Dutch) when we did a show in Belgium. We got the nameplate hanging on the wall of our rehearsal space now and we still laugh about it. That trip to Belgium was horrible by the way. We had to travel in a tiny car with 3 doors and we were locked in by all our gear we had to stack from our legs to the roof of the car. Our bassist Arnoux got his hand jammed between the car door just before we went off. Luckily he didn’t break anything. The show that we had to play was on an improvised stage in the middle of the woods. It was crazy. After the show we went out for a walk and our guitarist Mick decided he should touch a cow he saw behind a fence. It was hilarious, especially when the cow’s sisterhood came for backup and Mick got surrounded by 40 or 50 cows.

That’s about it for me. Any famous last words to round this interview off?

Yes! I’d like to thank you Rik and SWNK. It was awesome to tell a little of what 18 Miles is about and what we’re up to. I really appreciate the support and I just hope everyone out there is just as excited for the upcoming record as we are!