So what’s going on in the Abolition camp right now?

Hey, we are currently writing some new material towards our next release, no idea what it will be yet but I’m stoked with the stuff we are coming out with, and we will probably have some form of new record out by the end of the year. We are going to be to playing Raketa Fest in Russia this year and touring Russia and Eastern Europe around that time (July/August.) Hopefully going to be doing a short UK tour too around June.

Russia, that rules man. For any of our mainland or US readers who haven’t heard of you, how would you describe your sound?

We take a lot of influence from mid to late 90s metallic hardcore, but I don’t think we sound like any one band from that period. We’re taking cues from everything from Strife to Zao to Catharsis etc etc. The new stuff we are coming out with is a little groovier and has taken a lot of influence from One King Down and later Burn.

2011 was a pretty successful year for you guys, how are you finding 2012 so far? I’m siked for the shows with Cold World!

2011 was great, getting to release the LP and tour mainland Europe for the first time were amazing experiences. 2012 has been great too, we got to tour Europe again with an amazing band you should all check out called Unveil. They are from Switzerland and play intense 90s style hardcore in the vein of 108. We’ve haven’t played very many UK shows since getting back but that’s about to change real soon as we have four lined up for next month including the Cold World shows which I am also stoked for. I haven’t seen that band since I was 15 at Ninjafest 07, so it should be a lot of fun. Like I said we also have a couple of tours planned which I’m really excited about. 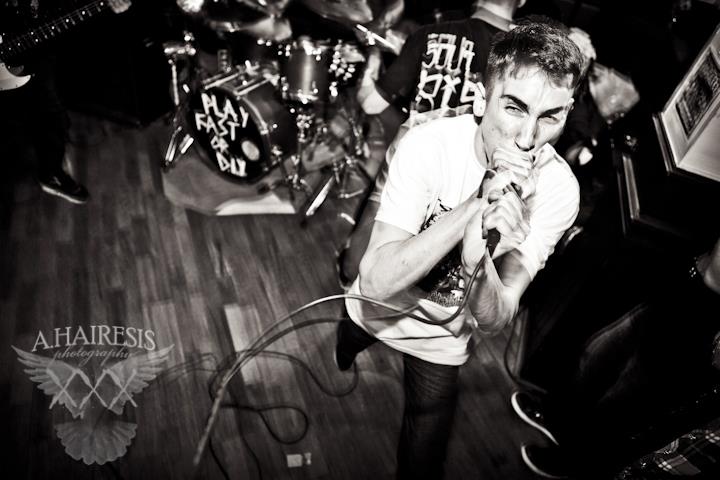 We as a community constantly make reference to and express our anger but rarely take any time to reflect on what the source of that anger is.

Holy Roar put out your LP last year, what’s the reaction generally been like to it? I’d been waiting with baited breath for it since you started playing new jams from it last summer.

I think it’s done pretty well and we have received some really positive feedback about it. We are without a doubt our harshest critics though, and there is a lot we want to do differently and build on with the next release. We are definitely proud of the LP but we are perfectionists too.

Do you feel Abolition has progressed between the seven inch and the LP?

Yeah. I think we got a little heavier, the songs got a little longer and more complex, and I think we came into our own a little more with songwriting. There is A LOT we would change when it comes to the 7”, we we’re still definitely finding our feet as a band but that’s the way it goes with anything you put out and like I said there are things we would change with the LP too.

I’ve always liked that Abolition is a band with a social and political conscious and has something meaningful to say, as opposed to just being an outlet for faux depressed middle class kids. With this in mind is there anything you’d like to take the time to speak about?

I don’t want to address any specific issue but all I would like to say is that at hardcore shows and within hardcore, we as a community constantly make reference to and express our anger but rarely take any time to reflect on what the source of that anger is. We each have our own cross to bear and it might not be a political source for all, but there is a distinct lack of specificity when it comes to this anger and that’s something I’d like to see change.

Abolition has done a couple of Euro tours now. How does playing on the mainland compare to LDN? And do you think your anti racism stance has helped euro kids pick up on you more? I was so surprised when there was a group of white power guys at a show I went to in Belgium a couple of years ago, I genuinely didn’t realise it was still an issue until that time.

As you said fascism/neo-nazis/racism is definitely a bigger problem on the mainland and which is rooted in the history of fascism in Europe throughout the early-mid 20th century, and I guess to some extent that I would agree that our politics are appreciated more by kids in mainland Europe. The UK is a pretty apolitical scene, and while I don’t by any means believe that all hardcore should be inherently political, it is somewhat disheartening to see just how distanced our scene and individuals within it are from political and social issues, and how its seemingly become acceptable for some very conservative ideas and attitudes to preside within it. That said, the UK is a great place to be for hardcore right now, there are some amazing bands and people, and nothing quite compares to a hometown show. There is so much awesome hardcore coming out right now, from the UK: Iron Curtain and Inherit, from Europe: Aspire, Set Adrift, Iron to Gold, Outbound, from the US: Incendiary.

What’s your favourite experience Abolition has enabled you to have?

Getting to as far out as Ukraine and having people singing along and going ape-shit was insane. Playing Poland was amazing. Touring in general. I feel really privileged to have been able to play outside of the UK at all.

Finally, just for fun, NY or DC or MA at any point in history, and why?

I’m going to say NY circa 88 i.e. the first Judge record, the best YOT shit and the New Breed comp: Breakdown, Outburst, Raw Deal etc etc etc. Anndddd NY state (In particular Syracuse) circa 96. Earth Crisis. Point. In. Case. I love early DC and Boston 82 too though but if someone held a gun to my head NY is where I would sway.