It doesn’t happen very often that I receive a record to review and I’m so impressed that I want the whole world to know about this band. It did happen when I received Abolitionist’s It Used To Rain. So I fired some question at Dustin and here’s what he came up with.

So how did you guys start this band? And why the name Abolitionist, which in my opinion is kind of linked to slavery. I guess you have a defenition for it that’s also suitable in 2011?

I started the band two years ago with a different drummer and bassist. There have been a few line-up changes since, as previous members have moved on to other projects. Things are going pretty well with the current line-up – we just did a short tour, released our full-length LP/CD, and are currently working on new songs for an EP we’ll be releasing in the spring (possibly as a split LP with another band).

I came up with the name “Abolitionist” because I was reading a lot books about the American Civil War era, specifically slavery and the abolitionist John Brown, around the time I started the band. The term can apply to a lot of causes, but that’s what I had in mind at the time. I also think it just sounds like a cool punk band name … 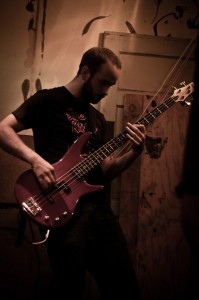 It Used To Rain is a concept record about the shortage of water and the chaos that follows. Why did you choose to do a whole record surrounding one topic? And why this topic and not for instance a nuclear meltdown or the shortage of food? What was your inspiration for this record? Was it the Blue Gold documentary? In my review I write that the world in It Used To Rain is in a way comparable with the world of The Walking Dead comics and The Road book. Would you agree?

There are definitely a lot of natural and human-caused disasters I could have picked as punk album subject material! I think I chose the shortage of water – complete absence, really – because we live in the pacific northwest region of the United States where it’s cloudy and rainy 8 or 9 months out of the year (no joke). When I imagine what it’d be like to have no rain, it seems completely unnatural and scary … with climate change (whether it’s human-caused or not), it’s completely possible.

I haven’t seen the “Blue Gold” documentary or read the “Walking Dead” comic (I’ll have to check them out now), but I’m definitely familiar with “The Road” by Cormac McCarthy – I even wrote a song about how that book freaked me out! You could definitely say that book played a role in inspiring “It Used To Rain”, although that book’s character development is a lot stronger than what I wrote …

The record ends kind of positive cause it rains again, why not end the world in a more grim way? Is there despite all the negativism a positive hardcore kid in you?

Haha, yeah, you could say that! I figured I had to end the story with some positivity, as the overall theme is pretty depressing. I always like to think that humans will work together for the common good as long as possible, but when things get streched beyond their breaking point I believe there’s a real possibility we’ll kick into pure survival mode and commit heinous acts against other because of self-interest. It depends on the person, though, ultimately. Also, the circumstances. Perhaps if there had been no rain for two years, shit got crazy, and then it began to lightly drizzle people would begin to think about the welfare of others? It’s purely speculative, but I hope they would.

I always like to think that humans will work together for the common good as long as possible, but when things get streched beyond their breaking point I believe there’s a real possibility we’ll kick into pure survival mode and commit heinous acts against other because of self-interest.

It Used To Rain is a story with a beginning and end. Do you play the songs live as well from 1-10 and do people easily sing along?

That was definitely the intent when we first wrote and recorded the album, but it hasn’t quite worked out that way (we only play about six of the songs live). We’ve definitely had some of the kids who follow us sing along and jump around, which is really what it’s all about for me. I’m getting bored with the bar shows that people just sit and drink at. 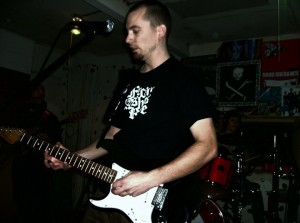 Will the next record be the follow up story on It Used To Rain or will it be a record which touches all different subjects, or just one thing again?

We have to be careful not to pigeon-hole ourselves as some kind of “disaster” band, although it’s tempting to write exclusively about earthquakes, pandemics, etc. Our next project will be a 5 song EP addressing the abolitionist John Brown and the events surrounding his direct action against slavery in the 1850s (we’re calling it “Bleeding Kansas”). After that, we’ll probably be doing another “concept” record – they make writing an album more interesting to me since there’s a focus. I’m still kicking around ideas and probably won’t start writing until January.

In the recordbooklet you ask people to check out certain organisations. Can you tell a bit more about these organisation and why you choose to support them?

They are all doing something important for both people and animals in their own way, both on the local and global scale. Partners-In-Health, in particular, do incredible things with public health in both developed and developing countries. They’re all worthy of support and hopefully people check them out and maybe even contribute an extra dollar or two – I guarantee each organization would be very grateful.

Thanks a lot for the support and interest, Arold – we definitely appreciate it!