After reviewing Escapism Is A Dying Art, the debut full length of Accept The Change, I was still left with some unanswered questions. Since unfortunately I can’t go to the record release show this saturday I got in touch with guitar player Jasper to see if he got some answers for me.

So your first ‘real’ release is a full length record. Why did you choose this format instead of the more common 7″ as a first release?

We’ve never planned to release something in specific but we were really eager to record something new and fresh that suited our new sound and direction more than our previous recordings. We don’t like the songs on our demo as we used to and choose not play them live aswell. When recording ‘Blueprint’ for the This Is Belgium compilation we knew we wanted to go back to the studio as soon as we had some new songs written. So we booked a studio for 6 days in March 2k11 not knowing how many songs we would record. That is something we’ll always try to hold on to, not giving us any limitation. And I believe this will prevent us from writing songs we don’t like at the end. For example, if we write 3 new songs we like and think they fit perfectly together but not with other songs, we’ll choose to record an EP instead of another full length. We’ll never know what the next release will be. There was a brief moment where we thought that we’ll be recording a 5 song EP but we ended up with 7 songs (‘The European Dream’ and ‘Numb’ used to be 1 song). It would no longer fit on a 7″ or 10″, so the 12″ was more plaussible. The record counts only 8 songs but it’s still longer than the average hardcore record. 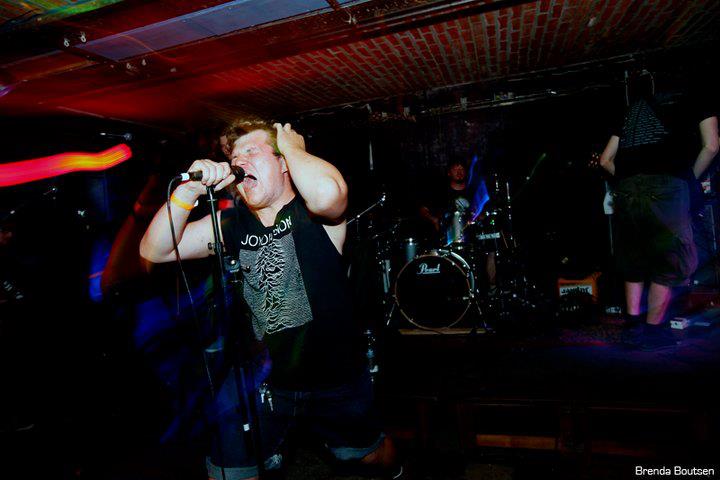 Tom’s depression boosted us to make songs to express those feelings.

The record is entitled Escapism Is A Dying Art. Are you referring to the lack of Houdini’s in this world or does it have another meaning?

Because of a writers block we had, right after we recorded ‘Blueprint’, we were stuck and couldn’t write any songs at all in a 4 month period. This was almost the end of the band. But then we wrote ‘Black Dog’, I guess you kinda hear our emotions we all had during that time in that song, but most of all Tom’s depression that was growing bigger every day. When we played the Midnight Souls release show a month later and played that song at the end of our set, he had a total breakdown. From then on the writing process went a lot quicker, you could say that Tom’s depression boosted us to make songs to express those feelings. Escapism Is A Dying Art is about the vicious circle of giving up and having to start over, only to hit the ground again. In these songs Tom sings about the things that he went through and how he felt about it. Starting out like all teenagers uncertain and anxious, sinking to the blackest depths of major depression, it’s a journey through his mind.

Is music in general and hardcore in particular a form of escape for you guys? Was that also one of the reasons to start the band, to be able to escape the common life of a Belgian teenager?

I think I can speak for the rest of the band that going to a show, listening to music, but most of all playing a show yourself is a form of escapism for all of us. It doesn’t matter to me if It’s hardcore or any other genre (god I hate that word), as long as I can somehow feel it. Before this band we were just a couple of 14 year old kids in a punk rock band that couldn’t play a instument decently, now we’re just a couple of kids in our twenties (and we still play like crap) trying to get more out of this world and express all our frustrations we have. On stage I become someone else, someone who’s trapped inside for way too long. All the aggression and hate that’s been building inside finds a way out. I escape, not only the common life, but also from myself. 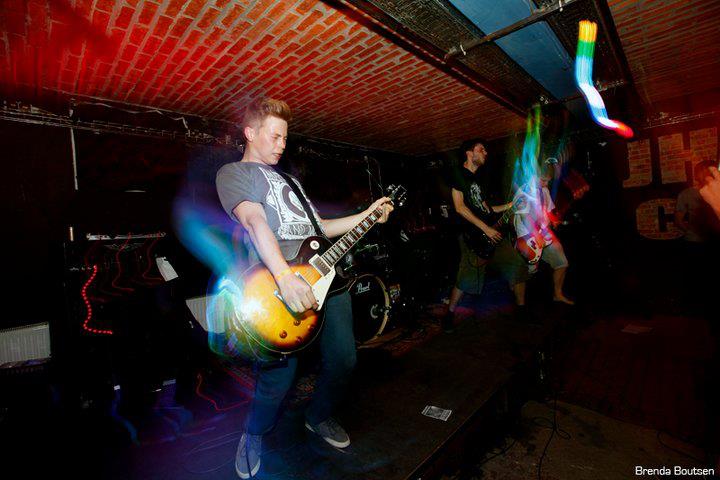 It took long for me to fully appreciate hardcore in his fullest form, at first I even played in Accept The Change while I hated hardcore music because I thought there were only tough guy bands like beatdown bands.

In my review I compare the songs with those of Have Heart. Are you inspired by that band? Which other bands do inspire you and which bands made you discover hardcore?

Everyone in the band is so different and apart from each other that we get influenced and inspired by so many different types of bands. I get influenced by Have Heart as much as I get influenced by The National for example. Tom is more into older music like Black Sabbath, Patti Smith but also likes newer bands like The Carrier. Ruben listens to more Converge like stuff, Jente is really into La Dispute and Christophe listens a lot to Pink Floyd. But all of our music tastes goes beyond one genre or more than just one band. If we stick to hardcore, Last Lights, Blacklisted and Defeater are three bands we have the most in common. The band that got me into hardcore was Comeback Kid. But it took long for me to fully appreciate hardcore in his fullest form, at first I even played in Accept The Change while I hated hardcore music because I thought there were only tough guy bands like beatdown bands. So hardcore grew on me and I discovered bands like Final Fight, Sinking Ships, Verse and Have Heart rather quickly. Hardcore music that wasn’t about hitting someone in the face. 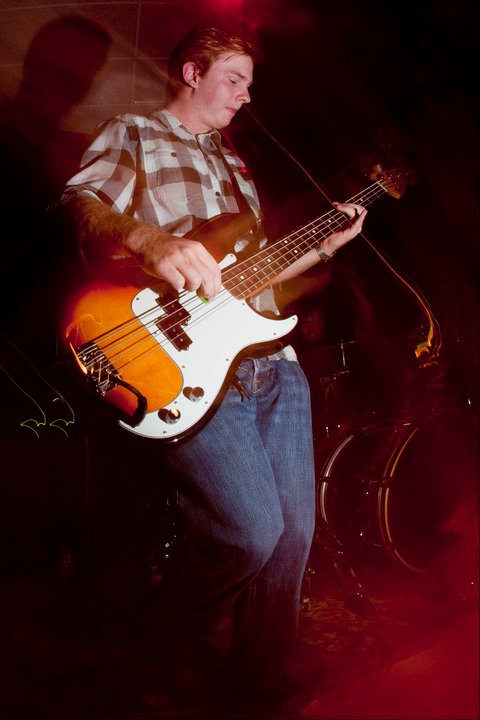 I suggested we just should go to Fluff Fest with our equipment and go from there. I believe we had to do this to prove ourselves and show the outside world we’re prepared to fail.

You have been on a short European tour this summer which I’ve heard was quite the adventure. What was your goal with that trip and how did things eventually turn out?

This trip was one of the best times for me. We wanted to do a European tour for 9 days at the end of July but eventually couldn’t get any shows (except for one at Break Out Fest, thank you Maarten Hens) because of so many big bands touring that period and so many big shows going on because of that. So I suggested we just should go to Fluff Fest with our equipment and go from there. I believe we had to do this to prove ourselves and show the outside world we’re prepared to fail. We had a list of shows wich we would visit and ask at the venue itself to play for free, some food and a place to sleep. But after meeting up with Jan (Assault Records) we talked with the boys of Ritual and told them what we were up to. Before we knew it they helped us out and got us a first show in Dresden. Thanks to Ritual and Soul Control we played two more shows in Freiburg (Germany) and Höchst in Austria. So our 9 day tour ended up to be: 3 days at Fluff Fest, 4 days playing our hearts out, 1 day at a show in Switzerland with Ceremony, La Dispute, Touché Amoré, Death Is Not Glamorous and 1 day of roadtrippin’ back from Switzerland to Belgium.

The record release show is coming up, do you have special things planned for that one?

We’re so looking forward to saturday, it’s going to be one awesome hangout. Almost every band that will play are friends of us, Jan of Assault Records will come over with his wife aswell. And as with almost every release show there are special things planned. The first 100 attendees will get a time schedule booklet, there will be a small distro of Disobedience and maybe a distro of Assault Records if all goes well. Between each band there will be a projection of spoken word by Henry Rollins and maybe some clips of the ‘Instrument’ dvd of Fugazi. But probably the most coolest thing is a limited version of the record, this version will come with a different cover and two silkscreen posters, only 25 are made, so it’s on a first come first serve base.

What do you hope the future brings for Accept The Change? With which bands are you eager to do a tour and why?

We’ll just wait and see what the future holds, we’re already working on some new songs and we hope to record them as soon as we think we’re ready. Maybe early 2012? We’ll see… We don’t all have the ambition to tour all over the world but we’d love to do some weekend trips and maybe some smaller weektours will come up. It would be cool to tour with a bigger band, but a tour with our friends Midnight Souls someday would be awesome. Right now we’re booking our first ‘real’ tour to promote our before mentioned first full length in February with Manbearpig. Contact fatalist.agency@gmail.com for more info. Keep an eye out on our blog, ’cause Tom will explain his lyrics one at a time during the next weeks/months. Other news from the Accept The Change front will be posted there aswell.

I think I can speak for the rest of the band that going to a show, listening to music, but most of all playing a show is a form of escapism for all of us.

Thank you for this interview Arold and for the nice review you did. It means a lot to us for people appreciating our work and efforts. If want to keep yourself updated check www.facebook.com/acceptthechange and/or http://www.acceptthechange.tumblr.com/. For shows, questions or other stuff concerning the band contact beyondthemasses@gmail.com