I recently did a new breed special on Scandinavia already, but here’s another fresh band from those parts that deserve some attention. I don’t know what’s happening over there. But it’s good. This time it’s Agent Attitude. They remind me of Antidote a bit. So no melodic vocals or great grooves this time around, but fast and snotty hardcore punk like they played it in the ’80’s. Gotta love it.

Singer Jakob answered these questions. Oh and just so you know, these are just simple questions to introduce a band. I wouldn’t call it an interview. For more in-depth stuff check the ‘interviews‘ section. 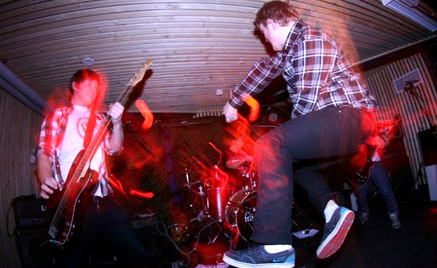 Ok, so what’s going on in Scandinavia? I recently did that Scandinavian New Breed special and now you guys are popping up. Is this all the result of some kind of nuclear testing or something?

Haha, I guess that’s it! There’s some cool shit happening in Scandinavia right now. It seems to me that shows are popping up more often, and that’s cool. And there is a lot of great bands that are actually active! For a while ago, almost every Swedish band that I listened to was either down or not so active at all, so it’s great to see more good bands doing shows, releasing shit and tour. I’m siked about Scandinavian hardcore 2011!

Mandatory question time. Who’s in the band? Any previous bands?

It’s me on vocals, Jojje and Lars on guitars, Dannenborg on bass and Victor on drums. Right now this is my only band. I have been playing in hundreds of bands for some years, but this works much better for me. It’s a lot easier to focus on the right things. Me, Lars and Dannenborg played together in Pointless Youth until last year when we decided to stop and start this. Jojje plays in Bad Review also. For Victor, it’s his first hardcore band. I’ve been trying to get Victor to play in bands with me for maybe five years and it didn’t work out until now. He’s a busy man, haha.

What does the world absolutely need to know about Agent Attitude?

Besides that we are a bunch of idiots? Hmm… Can’t come up with any… I guess people have to come to our shows to find out things on their own!

So what are the plans with the band? What’s happening?

We are releasing our first 7” on Green Menace Records and Monument Records in March this year! We are fucking stoked. This is also my first real release ever! I have only released demo tapes and shit before this so I am looking forward for this!

After the release, we are going to play shows as much as we can. We are booking an Euro tour right now that will go off in June and Impact Bookings are helping us out! The tour starts 3/6. So if anyone want to do a show with us, get in fucking touch!

Get in control. Ask yourselves a question, and answer it.

Last one. Who drew that great cover of the upcoming 7″ and what does it stand for?

Jakke! It’s a friend of our bros at Green Menace Records, so we can’t take much credit for that, haha. I think the cover turned out fucking great! We just wanted a cover that had skateboards, vomit, filth etc. A lot of idiotic things, and it turned out exactly like we wanted it to!

Do yourself a favour and check out some other UAHC fuckers like Undergång, Bad Review and Obnoxious Youth! 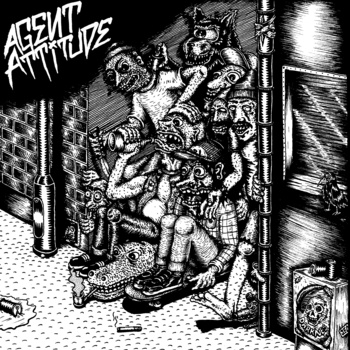 You can download the 2 song demo at their BandCamp:
http://agentattitude.bandcamp.com/