All For Nothing is one of my favorite hardcore bands around. I admit you won’t find that much of their records in my collection, but it’s always a pleasure to see them live. In my opinion that’s where they really shine. Their new album What lies beneath has been released recently. A brilliant excuse to ask ‘m a couple of questions. Guitarist Ernst answered a bunch of questions over the course of couple of weeks (before and after their tour through China).

What lies within us is out now for some time. Did this album turn out to your satisfaction?
Yes it did. cliché to say, I think it’s the best album we did so far. The writing was intense (in a good way) the recording went smooth and the result is something we are really happy with.

In my opinion you are one of the best live bands in hardcore. Every time I see you the energy level coming from the stage is just amazing. This is extremely difficult to translate to an album. How do you look upon this phenomenon? Do you feel you’ve succeeded in creating that live feeling on the album?
It’s extremely difficult. And it’s a hard question to answer. I think on this album we came closer to the live energy of All For Nothing than we did on previous recordings. But capturing a live feeling on a album can always be done better, if know what I mean.

Looking back at your old records, is there anything you regret? Regret is perhaps a bit harsh, but would like to have done different?
No not really. I’m really happy with all our records. Albums are like pictures. A fragment of us at a certain time and a certain place. The all have their charms and their flaws. I feel we needed to make them all, in order to evolve as a band.

Some bands state that a song is never really finished. If you hear them play their songs live a couple years after they initially released them, some accents are changed or the tempo of the song is a bit different. You catch my drift I guess… Is this something you also do in All for nothing?
For sure ! we grew as musicians and because we had line up chances over the years so we play them different then the original recordings. So songs have some more “swing” to them or we play a slightly different ending so the blend well into the next song on the setlist. 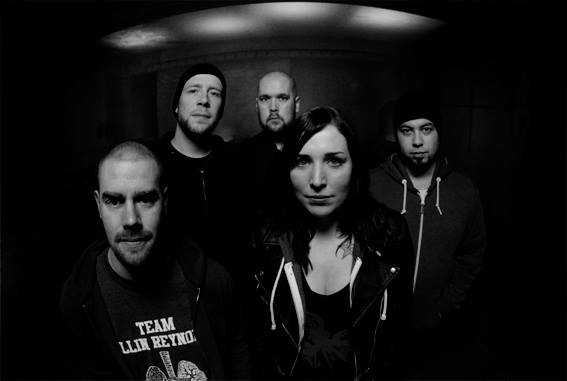 It seems to me you’re playing a lot live to promote your albums. This time China is a destination. That’s not the first place that would come to mind if you would have asked me to guess where to promote What lies within. How did this come to be?
We were supposed to tour china last time we went to Asia. For various reasons it didn’t work out that time. So we made a promise that we would tour China as soon as we could. So the tour was planned before we started on this album.

China isn’t the easiest place to book a tour, I think. What difficulties did you have to overcome?
Getting the proper visa.

Well, you’re back from China now. Was it worth the trouble of getting the right visa?
Yes it was. Truly an amazing experience to go there. One of the most fun tours we ever did.

What’s the scene like over there?
It’s small. The big cities like Beijing and Shanghai have scene’s, the smaller towns we visited really don’t. They do have a lot of people that are enthusiastic about live music though. Punks, metal kids. All kinds of characters; just the way we like it. We met some really cool bands and people with a lot of heart for hardcore music. It was pretty cool to interact with those kids despite the language barrier. Another cool aspect is that there are also a lot of foreign people active in the china’s scene. We met Canadians, Russians and South Africans that work in government institutions or schools and play in bands with local kids.

Did you find the time to behave like a proper tourist?
Yes and No. We had delay on the way to Beijing so we didn’t see the usual tourist stuff we hoped on. However: traveling by train, public bus and airplanes for 10 days gets you to places and sights that you wouldn’t normally encounter. Very enjoyable !

What’s on the agenda the after you’ve returned from China?
We’re doing some weekend shows and festivals. We’re making plans to tour again after the summer but nothing concrete yet.

I’d guess you’ve got jobs next to playing in All for nothing. How do you combine working with playing in this band?
We all work part-time. It’s manageable, but it can be tricky time to time. 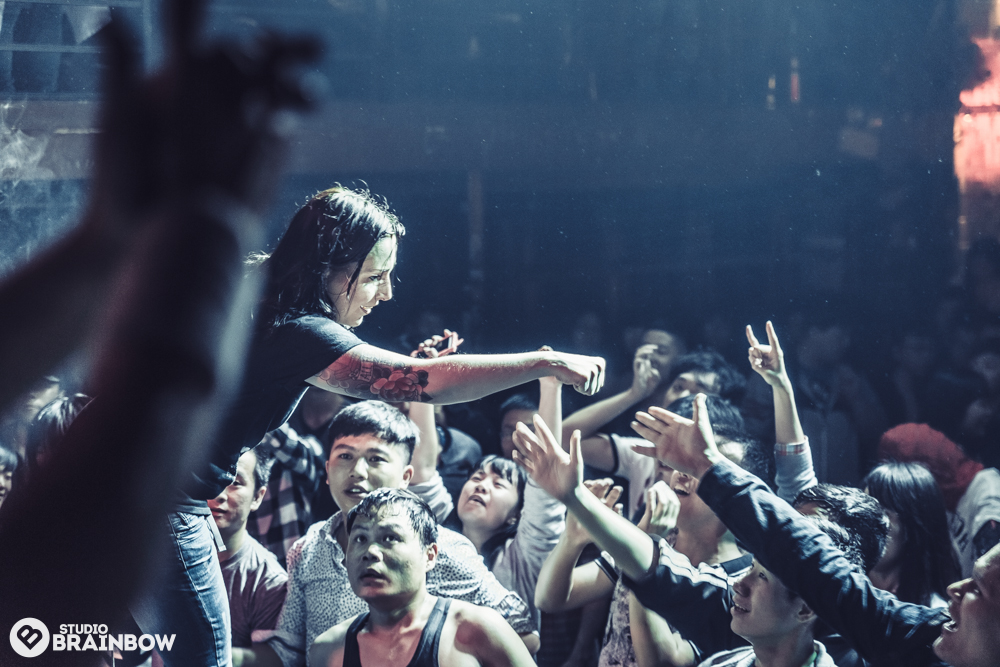 Traveling by train, public bus and airplanes for 10 days gets you to places and sights that you wouldn’t normally encounter

All For Nothing is often referred to as female fronted hardcore (in fact, you state it yourselves on your facebook page). That’s no lie of course, but it doesn’t say anything about your music in my opinion. Does it bother you that apparently it’s more important there’s a female singing than what kind of music you play?
No not really.

It seems every album you have a new line-up and only you and Cindy are around all the time. What causes this high rotation of personnel?
It’s natural for people focus their energy somewhere else over time. It’s all cool with us. Being in a hardcore band is not the easiest way to spent your free time and although it can be a lot of fun, I guess there comes a time where spending all your free time driving a lot of miles, to play for 35 minutes and sleep at somebody’s couch is actually conflicting with other goals. People’s goals in life simply change over the years. With those goals come choices. If you try to built a serious career or want to have kids: you should focus on that. You’ll never get rich in this type of music, so you must love it, live it and sacrifice for it. If you can’t do that anymore All for nothing is not the band to be in.

Does it put you down to see band members leave? I mean: you’ll need to find replacement, which can’t be too easy. I guess you’ve got quite a wishlist: that person has to love the music you make, has to be able and willing to give it everything, and with the amount of time you’ll be spending together on the road there has to be some connection on a personal level as well. Does this hold the band back a bit? How you deal with these changes?
It’s always understandable when someone leaves. And we always make sure that we don’t slow down. We got quite the “wishlist”, but we also have a lot to offer, which always made finding new members a bit easier.

Changing band members hardly influences the sound of the band. Do the other band members have a say in the band?
Yes they do ! We don’t want to be in a band where the two of us would write and dictate everything and would just have musicians just to play our songs. Every band member in any line up always had right to an equal share in the content of the band. But this line up is the first one in which everybody contributed a big part to the songs. Us being and living together of course makes that we write quite easy. There is always a riff of lyric flying around the house that we can bounce to the rest of the guys. Final ideas are always made when everybody is around. If we all like it: It stays! 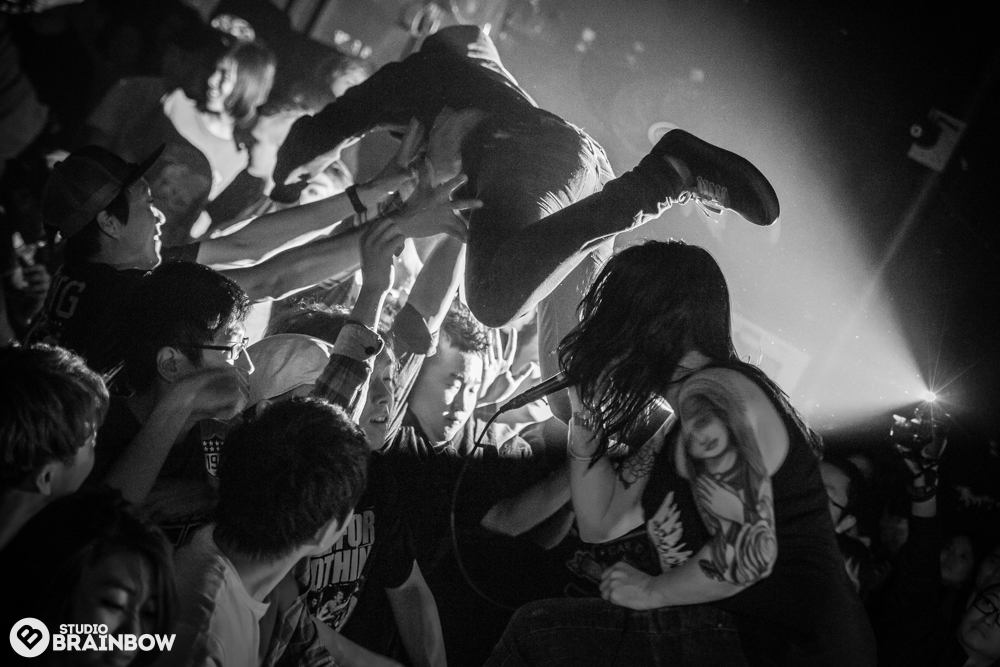 You’ll never get rich in this type of music, so you must love it, live it and sacrifice for it

Your sound has been consistent over the years. With different members contributing to different albums: how do you make sure you don’t drastically change sound?
It happened naturally. From the get go we had a blend of styles, but with a sound of our own I think. As soon as Cindy opens her mouth you know it’s us. The first couple of songs ( for Can’t Kill What’s Inside & the Solitary 7″ ) have all been written by the same persons. Those 2 release gave us a platform so to speak. On later release we tried to fine tune and develop that style.

You and Cindy have been a couple for quite some time. How does playing together in a band influence that? And the other way around, how does you two being a couple influence the band?
When Cindy started singing for us and the band became a bit more serious than we ever thought it would be, we had a good long talk about that situation with the rest of the band. We always felt that our personal relationship should never effect the band in a negative way.
And I think it never has. Of course we have disagreements like any other couple. But we leave those at home. Being in a band together for about 8 years now definitely influenced our relationship. But only for the good. We are traveling the world together. Doing something we both love. It shaped us a persons ( I think that goes for the whole band). Next to being lovers, we are also best friends. Through the years we learned to make a balance between being band mates and our relationship. Living together definitely helps. It should be no surprise that this band (or actually any band) is a lot of hard work. Being in the situation that we live together and both share the same passion, makes the band work a lot easier to do. Every band member contributes in the process of keeping this band running, so not everything comes down to the two of us.

If so, what do you think causes this and what does this do with you?
There are a lot of factors for this, First of all: we play most of our shows outside of Holland.
It’s always been like this. We always traveled a lot. And by doing so, our audience in countries like Germany and France grew more rapidly than in Holland.

But it seems that most Dutch bands that play extreme music seem to do better for themselves across the border. What it does to us: It makes us travel more, which is cool. we love to do that.

You’ve made a couple of videos. Do you feel these are important for All for nothing?
Yes I think it’s a cool medium and a good way to get your name out.

I’ve seen “live” videos, but also videos with some sort of a story (for example Dead to me and Twisted tongues). Who comes up with the idea behind a video?
It’s kinda like making songs or plans for a tour.. we start firing ideas between band members and in case of video’s we consider the costs, amount of effort and time frame. Then we try to come up with an idea that we think is cool with the song we shoot the video for.

That’s it for me. Anything you’d like to add?
Thanks a lot for the interview

Band: All For Nothing