Ever heard of Cycle Records? Fire & Ice festival? One Kind Word Fanzine? Needless to say that Gabi is a staple of Barcelona Hardcore. His new band, Appraise,  just released a demo; which calls for a chat with the man behind this fatherly grin. ¡Buena onda!

Hey Gabi, what have you been up to lately?

Hey! How are you?! Things are good here. Just came back from Brazil a couple of weeks ago. It’s been wonderful. My girlfriend is Brazilian and we went down to visit her family and sightseeing some places. I had the chance to do a short trip to Buenos Aires and visit the guys from Reconcile and some others. Now, I am back to reality, working again, getting my driving license (finally) and welcoming the summer.

Tell me about Appraise; how did the band came together; what musical influences did you have in mind?

We’ve been friends for a long long time (more than 10 years). Joan and Eric (in Appraise they play guitar and drums) played together in Cinder. I was really close to the band as well. They are my closest friends. We share a love for hardcore so it fits really well to play together. Our bassist (Miguel) is the youngest of the band. We met a couple of years ago and we became good friends too. Power was done and 3 members of the band (Joan, Miquel and I) wanted to keep playing. We thought about keeping the same name but we decided to start a new project, all new songs and much more fresh. So, we asked Eric to join us. He accepted in a second. So, that’s how started.

“We are here with new ideas, living for today and not in a nostalgia trip.”

Why did you stop POWER to start APPRAISE? In what ways are both bands different for you?

POWER stopped when Pau (guitar) moved to Vancouver. Originally, we were supposed to keep playing as 4 piece but the guy playing drums in Power wanted to focus on his studies and after a fruitless summer trying to get back on track without success APPRAISE was a reality. POWER was the band where I’ve learnt (still learning) to feel self-confident singing. I’ve always wanted to have another band since my first band didn’t do much (we were horrible) So, it’s kind special to me for that reason. I have good memories of the band but some bad ones as well. I got the best from it but I also got to know how hard relationship between people can be. Anyway, the good things overthrow the bad ones!  Power played about 20 shows. We had an incredible reception from Barcelona (I can’t say thanks enough!). Young kids got involved in HC through Power. (Now, I am friend with them and I feel overestimated and shy when they talk to me about the impact we had on them.) I guess we left a positive mark.

APPRAISE is our current project. A tool to express ourselves. We are not having our best days in Barcelona because of politics, the economical crisis, the right wing government, etc… It’s a way to escape from the shit we live every day as well. A project that bring us happiness, sharing good times with friends, being in a creative process is always more positive than staying home with nothing to do. In a way, I’ll say we are “the continuation” of Power, not in a sense of being same music, same goals, etc… But, we weren’t done with Power, so, we take our will & effort into Appraise. However, I don’t like when people bring up the “ex-Power” thing. I mean, I guess, we have to live  with it. We are here with new ideas, living for today and not in a nostalgia trip.

Your first release came out recently, what can you tell me about it?

We have a demo out now with 3 songs + an outro. The original idea was to put out a 7” from the start but we have a few shows lined up, so our friend Miguel from Tea Brigade offered us to do a short run of demos to have something to spread the word until the 7” is ready. Hopefully our 7” will be out in late July. People seems to like it and for the first time we’ve been helped putting out our record. It feels good to have more people involved in the whole thing.

It came out on Tea Brigade Records, why not your own label Cycle Records? What’s the status of Cycle by the way?

Miguel moved to Barcelona. He liked it and offered us to do it. It felt so right. To answer your question: why not on Cycle? I’ll tell you that I’ve developed some kind of “dislike” feeling regarding selling records/shirts to people. Mainly for one reason: most of them are my friends, I don’t feel good charging someone for that. We did the label quite well for a few years (when people were buying records and shipping wasn’t that expensive) but on the last few years things have changed. People are not really into buying records from small bands and so on… We were losing money with every release. So, we are on hiatus. Our time to dedicate to the label is reduced as well. Joan is working full time, 2 bands, helping booking shows and playing soccer in a semi professional team. Same for me. Working full time, finally getting my driving license, planning to go back to study next year, an obligatorily physical training, booking shows, 1 band and so on… We might put a record in the future. If we do, it would be a short press but nothing for now. Nothing has to last forever.

Moreover, it’s good to do things with other people. It’s a learning process to me. Being on both sides. Putting out the record and being part of the band who is releasing the record. It’s interesting. 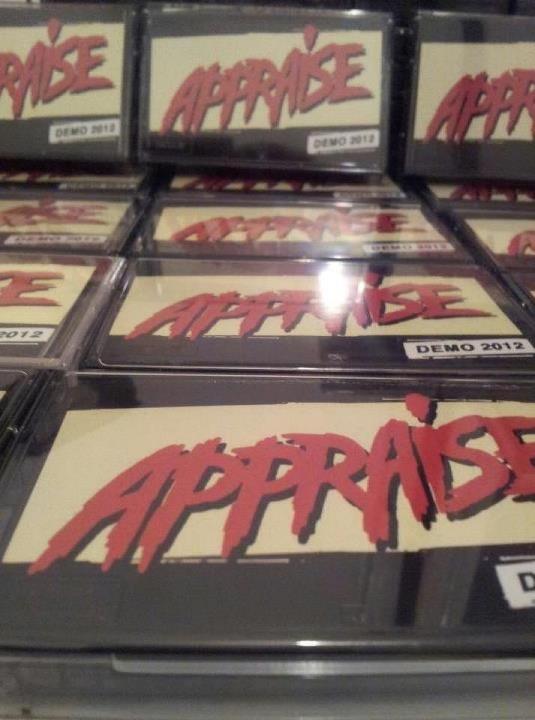 “For us, hardcore is so special […] it has values that I use in my daily life.”

You told me that you feel like people’s expectations regarding Appraise might be too high; and that it puts some pressure on you; how so? Do you think people in Barcelona are looking for a band to fill the void left by Cinder?

Cinder won’t be replaced. They appeared on the right moment doing the right thing. Cinder was much more than a band. My generation was looking for attitude and a strong desire of change. Cinder brought all of that. Seriously, I can’t find the words to describe what they mean to me. I have the best memories of those days and in a way I can still enjoy the fruits of it. A large part of my friends are related to Cinder in some way.

When we talked about people’s expectations, obviously, I am talking in a really small scale. Power became a bit popular in Barcelona and when people found out we were doing a new band automatically thought that it would be like Power (who according to a few people was a good band). I mean, we hope to be a good band but for our own merits, not for our previous endeavors. Like, for example, people were asking us to play and we did a show at the Can’t keep  Us Down showcase. It was too early. We sucked. We still needed more practice. Worst show I’ve played being in a band. Now, we’re ready. So, we’ll play as much as we can.

After being on the decline for the last few years, Hardcore in Barcelona seems to be picking up again; can you tell me about the current state of your home scene?

Barcelona is doing better now than a couple of years ago. There are new bands like Pay the Cost, Downside, Hold, The Crowd, Crosta, Absurdo, Col·lapse, Crim, The Gundown, Assac, Las Otras, Crack del 29, Should be afraid, C1413 and others that I am forgetting for sure. Most of the bands are quite new and still need to develop a little bit more but I guess, they will bring good things in a near future.

Anyway, there are new bands but there is not many new people which is sad.  There is a big gap between generations… It’s so hard to fill. It is not a solid scene by any means. At least, not for now.

“Where are the newer generations? I guess, we did something wrong. Why are they not here?”

In Joan’s column in Varsity Fanzine #6, he wrote something along the lines of “[…] I think that sometimes we started bands just so it doesn’t die […]”. Is Appraise a way for you to keep hardcore alive in Barcelona?

For us, hardcore is so special, much more than music. We were younger and we found a place where to build things on our own. So, it’s kind of an extension of us. So, yes, we won’t let it die. Normally, people want to have it as a possession but we are the opposite we want to share it with everyone. Keep helping it growing and growing you know.

It’s a shelter to have fun, to look at what’s going in the world and act towards it. It’s not a hiding place. I mean, it has values that I use in my daily life. Trying to do what’s right. A place where to learn to be ourselves. So, Appraise belongs to hardcore but it’s not the only focus. Spread a drug free attitude (even, our band is not sxe, our drummer doesn’t label himself sxe), PMA, try to find solutions to social problems that we are facing today. Our lyrics are really orientated to social / political issues.

I can’t stand when people say that politics don’t belong in hardcore. Well, I’ll say, I don’t give a fuck about any political party but don’t deny that we are under their influence… it’s a stupid attitude. Their decisions affect our life. (so, educate, organize & activate!)

In that column he also put an emphasis on the fact that, for the last decade, the scene in Barcelona had been animated by the same tiny group of people at its core. After all these years you’re still on the forefront booking shows, doing bands, zines, putting out records… What keeps you motivated?

Our love for HC. It has filled us our life till the top! The attitude, the message hit us so strongly! Joan is right, it’s not something that is just happening in Barcelona. It’s the same thing almost everywhere. Think about it in Europe. The first time I went on tour was about 10 years ago. I met some people who booked shows for us, and all these years later it’s almost same people doing shows. What will happen if this people stop doing it? Where are the newer generations? I guess, we did something wrong. Why are they not here?

To clarify, we won’t leave but I don’t think it’s good that just a little group of people has to be responsible of setting up all shows or release records, etc… I think, it would be much better if these duties were shared between a bigger number of people. It would increase the sense of identity and it would be more fun for everyone.

I don’t know, if I replied properly the question, but I guess, it’s something that belong to my life so deeply. I like it so much. It brings me happiness, I like to meet people, share ideas, create projects, it’s a way of life! That’s what keeps us motivated!

What’s in store for Appraise? Any plans?

We are going to play as much as we can. We’ll be playing a few shows in Spain. There is talk South American tour on the fall as well. (Varsity Records will release our record in South America)