There’s no denying the fact that Backfire! played an important part in the European hardcore scene. The band called it quits in 2009 but is now back and harder then ever with their new record ‘My Broken World‘. Wyb looks back on Backfire’s past, talks about the new record and his broken world.

‘It’s not a comeback, it’s an encore’ is one of the lines on This One Is For Us, track 8 on the new record. Just how much time did pass between the final shows and the point that you all decided to do Backfire again? What made you come to this decision, what did you miss after Backfire stopped. Or were you planning on getting together before you did those final shows?

I think it was about a year and a half after the final shows that we started to talk about maybe doing a new record, we did two special appearance shows in 2011 and we felt we still liked doing what we did. Pat’s problems with his voice were disappearing slowly and we thought why not, lets do an encore.The result is My Broken World.

I didn’t miss playing shows or the music that much to be honest, I missed being away with my buddys, being in a van and complaining about everything. Without Backfire! I could never go to the places where this band has taking me, that’s the best part for me. 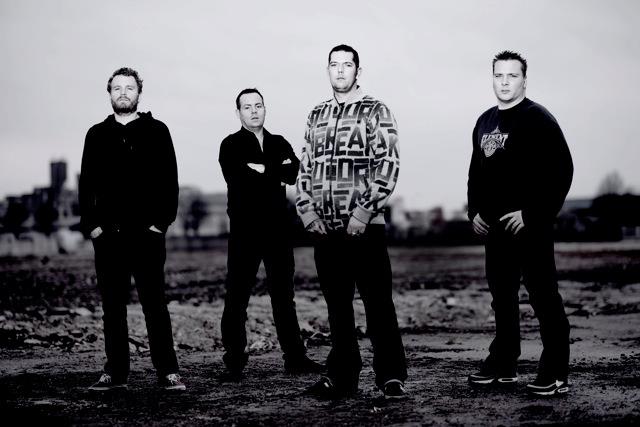 A few of us crossed a line in partying that was a little beyond the limit of fun and common sense.Things got out of hand and for me Backfire! was one of the main keys to do pretty much everything that’s not healthy.

Did you decide to start doing shows and then started thinking about doing a new record as well?

Somewhere in the back of our heads we knew that our goodbye show was not going to be the last time we were on stage together. We just didn’t talk about it to each other. We were kind of happy it was finally over and most of us were still alive. A few of us crossed a line in partying that was a little beyond the limit of fun and common sense. Things got out of hand and for me Backfire! was one of the main keys to do pretty much everything that’s not healthy. It got too crazy in the end.

A lot of the lyrics on our new album are about that time and the empty period that I’ve experienced after our break up. I decided to stop filling myself up with stuff that feels like a momentarily solution but is taking you down bit by bit. So going back on stage again is going to be a whole new experience for me personally. So there was a lot for me to write about, it wasn’t really hard to come up with lyrics for this record. When we talked about an encore we all felt we should make a new album and not just do shows again. That’s a replay, not an encore.

Did it took you a long time to write the new songs as you weren’t a band for some time or was it easier because everyone had lots of ideas laying around?

I write down some lyrics now and then, when they pop up. And when Igor started writing new music I tried to fit it all in. I took some time of last year, to work on myself in a sheltered place, where I could find myself again. And I was trying to figure out where and why my life got so messed up. That was a very useful and special period in my life, I wrote 80 % of the lyrics in that place. But we’ve put the record together and recorded it in a very short period. We need that pressure to make an album. Dave, Igor and me only got together once for a few hours, the rest we did by ourselves and in the studio.

If I will get the feeling, attitude and lifestyle back like it was when we quit, then this will be a very short encore.

Is there a difference in the way you treat Backfire in 2012, like you’re not planning extensive european tours etc?

We will take 2012 as it comes, we hope we can play some cool club shows and festivals, maybe we wil do a tour if everything still feels right and we all still enjoy it. If I will get the feeling, attitude and lifestyle back like it was when we quit, then this will be a very short encore.

Why did your original bassplayer left the band and why did you decide Harm (ex-Reaching Forward, Modern Life Is War, Razor Crusade a.o.) was the right guy to be the new member?

After our breakup Igor was the only one who kept on doing things in music, playing for BFP and Madball and producing records for other bands.The rest of us just kept on working and being misarable. A lot of things happend to each of us personally but we all stayed in touch with each other somehow. Frank was never a instigator in Backfire!, but we just lost contact. Haven’t heard from him since that last show in Leipzig.

We wanted to do the encore with just the four of us in the first place but Dave and Harm met at the Persistance Tour and they fell in love. I think Harm is perfect for the job and will fit right in, it’s not the most obvious line up change but who cares?

I hope we inspired people to listen to this music and realize that even if you are a constricted moron you will be able to be a part of this scene and you can achieve a lot of awesome things with your band.

Backfire has paved the way for many European hardcore bands, what made you stand out from all the bands back then who never had the kind of succes you guys had?

I dont know if we have paved the way for any band or scene, I hope we inspired people to listen to this music and realize that even if you are a constricted moron you will be able to be a part of this scene and you can achieve a lot of awesome things with your band. To be honest I think we just came at the right time in the right place with our first album. We became friends with a lot of great bands that took us on the road and helped us to get our name and music out.

1994 is very different from 2012 in a lot of ways, there were not that many bands around that played our interpretation of hardcore in Europe. It was easier to stand out. Our first drummer Richard (rip) was a guy who could get things done, without him this would have never been a success I think. When he died we were lucky enough to know Igor, who had replaced Richard at one show 12 years ago. Igor is one of the few guys I know who is a great musician, professional and knows when to party without losing himself. He wrote most of the music on the new cd and produced it. We are blessed to have a guy like him in this band and together with Theo from GSR Music he is the reason why we can still do this at this level. The rest of the band is totaly useless 🙂

Backfire never had the ambition to do that amount of touring and put everything aside for our band. That’s also our strength in a way I think, completely unpretentious in our music, lyrics and attitude.

I think that No Turning Back and Born From Pain are Hollands hardest working bands, the amount of shows they play and the countries they tour are unbelievable, I have nothing but respect for that!  Backfire never had the ambition to do that amount of touring and put everything aside for our band. That’s also our strength in a way I think, completely unpretentious in our music, lyrics and attitude. I’m not saying we are not proud of what we accomplisheed but we really nearly ever gave a fuck about what others did or think of us. We canceled a show at “Noorderslag” (high profile annual Dutch music festival with lots of people of the music business attending – ed) because we had to get up too early, I think that sums up the amounts of fucks we gave.

Right now we care even less. I hate optimistic people, and I have been through too much misery, lies and dissapointments to believe things will get better. “It’s not going to be okay” and “Trust no one” are my battle cries these days.

The M-town Rebel scene has been dissolved. What are your best memories about it’s glory days and what should have been done differently in order to still have a vibrant hardcore scene in Maastricht nowadays?

The time we had a really big and loyal scene here was burried together with Richard in my opinion. It was great at the time and it gave bands like us and Right Direction a perfect start. The song “This one is for us” is a about that period and how much fun we had in that time. That’s why we asked Dave (Right Direction) to do some vocals on that song, and we asked Hein from Tech 9 to join us on an other song, The Eindhoven scene was very connected to the Maastricht scene those days.

Right now there is NOTHING going on here,we have one club that is suitable for hardcore shows but the guys who run that place doesn’t put in enough effort and they just don’t get it. But to be honest for the last time, I don’t care. I have more important stuff to deal with then the hardcore scene in Maastricht at the moment.

For how long will this encore last, just this year?

I have no idea, like I’ve said: as long as our feelings about what we do is good and the energy and passion is still here we will take things as they come. But no second goodbye shows or anything, no way! And I’ve made a promise to myself that I will not be on stage playing this kind of hardcore when im past 40! And I will keep that promise! Pat also made that promise, so time is ticking…