Chris Mahon is a legit core-dude who doesn’t seem to take himself too seriously. I like that. He seems to be one of these people who are actually stoked on hardcore for the right reasons. I knew he sang in this band called Bang Bros out of Dublin, but it took me a while before I checked them out (although their somehow “controversial” name triggered my interest). I was very pleased with what I heard. I figured they would be interview-material for a New Breed. Get Low!

When did you start the band and what was the initial plan? I’ve got the feeling that Bang Bros started as a joke thing and that it’s getting a little more serious now, how wrong am I?

I was actually the last member to get involved. Robbie and Eddie at the first of an annual “Dublin Hardcore fest” deal thought starting a band called Bang Bros would be the funniest thing ever. Turns out it is. Anyway, Gav got involved and Jon wanted in too. I was out of the country for thay show so missed the genesis of all this. So in reality you are pretty spot on saying we started as a joke haha.

I always get shit from the other guys cause my remembering of things is usually wrong and it comes across as pure lies, so you’re going to have to just assume that was all true. What’s definitely true is we wanted to have fun and we do.

One kid gave us shit for it at a show we played, he said no one was going to take us seriously and we wouldn’t make anything of ourselves. I had no words for the dude, I was dying with laughter. I was polite with him though and then rang Gav to tell him what just happened and died again.

It’s kinda awkward if your boss asks what the name of your band is though. My aunt was bugging my mom for the name of my band and I know for a fact she’s going to Google “Bang Bros”. I’m so stoked to see how that turns out.

Mmmm, we’ve been called a Lockin’ Out-style band which is kind of a compliment cause those bands ruled and continue to do so. I guess that’s a fair comparison as we do listen to those bands but I like to think we add our own things from what we listen to individually.

In short: solid beats that you can get low to, or the soundtrack to a crucial dinner that will have sexy results.

To my Grandpa: Elvis playing his smoothest riffs while Bing Crosby is getting down with all three Andrews sisters. 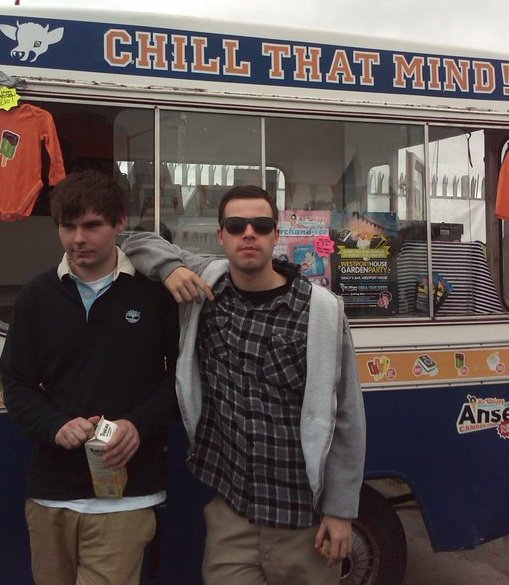 It’s like an awesome exchange program for bands. We know we have people looking after us over there and we are more than willing to do the same when they come over here.

How do you feel about starting a band at age 28?  Isn’t it odd for you to share the stage with younger kids at shows?

Hey fuck you! I don’t know. I was kinda late getting active in hardcore. Maybe 17 or something. This is like the fifth band I’ve done, usually people were younger than me but not by much. Eddie is the youngest dude in the band and he’s 23. We’re all in this for fun and we’re all friends, so age really isn’t an issue. I’ll only start to be conscious of being the creepy older dude when I hit thirty or so. That being said I hope to be doing this as long as I can.

Tell us about your upcoming 7inch.

The very crucial Ati and Balou who run I Drink Milk records have some misplaced belief in us and offered to put out a record for us. We are so stoked as that label has an awesome pedigree. They put out the Clearsight demo,True Colors and the incredible IronxCurtain among others so we have some seriously talented labelmates to live up to.

The record is called Group Therapy and we are just finishing the art. We’re pretty happy with the songs and the mix so hopefully people will be into it. We are so appreciative of the IDM dudes for believing in us and giving us this opportunity.

As for now do you have any plans? How about playing shows in mainland Europe?

We would love to get over to the mainland to play but its hard for us to get over there, and then getting time off from work and shit. Jon is studying to be a nurse and does insane hours, so it’s hard for him to get time off. And to be honest I wouldn’t want to tour with another drummer.

We want to get over to Belgium and play with Get Wise for real. That band are seriously so fucking good and the nicest dudes in the world. We played with them in London and they cleaned the floor with every other band that night. Wise Bros tour coming summer 2012! 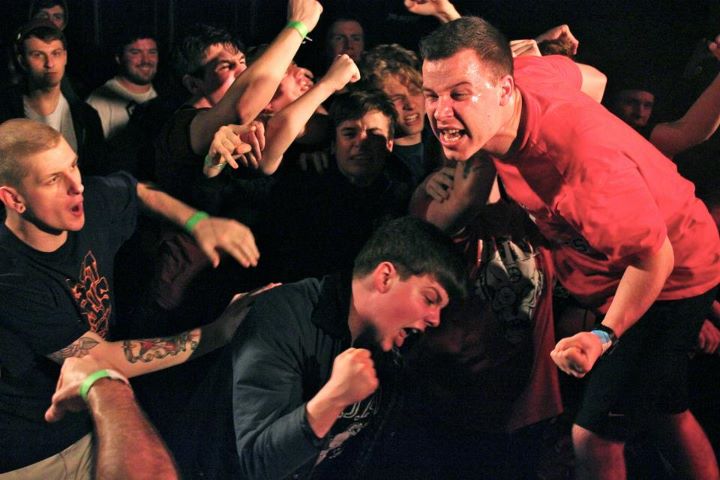 I’ll only start to be conscious of being the creepy older dude when I hit thirty or so. That being said I hope to be doing this as long as I can.

Can you give us a glimpse of what the current Irish HC scene is like?

There was a bit of a slow patch there for a while, but Irish hardcore is pretty great at the moment.

Frustration are the stalwarts right now. It seems like they’ve been a band forever and just keep getting better. They have an album coming out on Purgatory records soon and the new songs they have been playing live are so good. Serious biz.

There was a while where there were no bands starting and older bands like The Blind were breaking up  but  new bands are coming up like Pulled Apart who sound Black Flaggy with Sabbath riffage, and the mighty MIGHTY Nibiru, who are waging war on the all the gods with their style of Astro-Egyptian hardcore. Serious five minute songs that make you want to bang your head like it aint no thing. There’s a ton of other bands like Rats Blood (crusty hardcore), Putrefaction (doomy goodness) and Zom (trve metal).

There’s a couple of bands that play every now and then and when they do its something really special. The first is Find A Way who sound like an Irish Kid Dynamite and just rule. The other is Crowd Control who are playing there last show soon and I know its going to be a belter and I’m going to get an injury. They are like a cross between Citizens Arrest and say Bastard. They are amazing live and write the heaviest songs known to mankind. Fact!

According to you, why are there so few Irish bands known outside of the UK?

We’ll the most notable inconvenience for us is that we have to get across two stretches of water to play the Mainland and that’s a pain in the ass, and expensive gas-wise.
There are a few bands thats play out more and were successful doing so. Tunguska toured Europe quite a bit, they were a band that shared members with Crowd Control and were heavy hardcore crust almost. Real good band. Crowd Control themselves got to Europe twice I think. Bacchus are a band from Galway playing heavy D-beat, and they get out there. They toured the states this summer and did pretty well for themselves.

I noticed that you played a bunch of shows in the UK already. Are there strong ties between the Irish and British hardcore scenes?

For the most part yeah. We can go over to the UK without gear and play a show which is awesome. As you know with every scene there are a fair share of dicks and awesome people. We seem to find the awesome people and bands that are willing to help us out with gear and a place to stay. We have great ties with the Welsh scene through our split with Wardogs (RIP) and from those dudes coming over to play or hangout with various bands. Joe, Dan, Rich, Lee, Pablo, Parslow are all awesome dudes. In the UK we’re getting to know more and more people each time we go over, and its just so cool.

It’s like an awesome exchange program for bands. We know we have people looking after us over there and we are more than willing to do the same when they come over here. 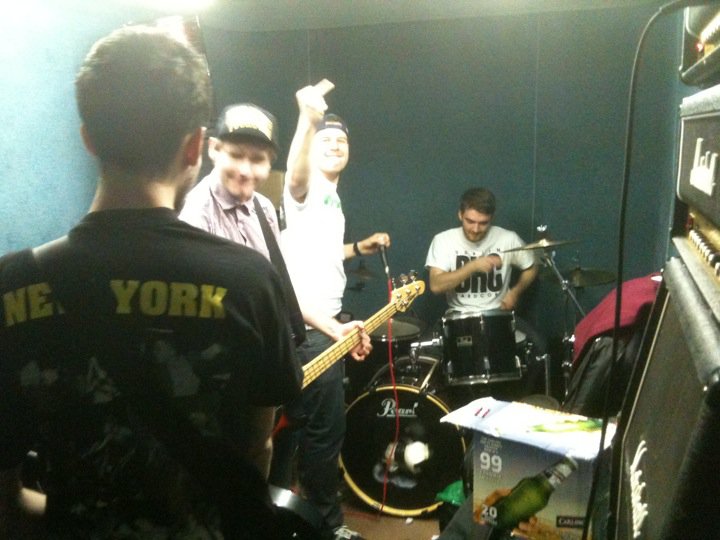 One kid gave us shit for it at a show we played, he said no one was going to take us seriously and we wouldn’t make anything of ourselves.

You also do a sweet zine called Too Tired to Drive Home, tell us more!

I do indeed. It’s a roughly 36 page zine that is a cut and paste deal. It’s a pain in the ass and I hate it when I’m doing it but I’m so stoked when its done haha. I think this second issue has about 110 hours put into it. It doesn’t look like it when you see it though, so you’re going to have to trust me. I just wanted to do a zine, as none of my friends were really doing them anymore. Plus I wanted to be able to express my love for all things Atari, Youth Of Today and John Larroquette.

By now we’ve established that you are a true visionary, so tell me: What hardcore trends will appear in 2012?

10 panel hats! I don’t know. While it is unlike me to tern down the compliment of being a visionary I am fairly clueless about what’s cool in hardcore. I guess I’m just out of touch cause I’m sooooooo old (you bastard!). I’m still guilty of the blueniform (navy hoody and jeans) from time to time. I can tell you what I do want to come back: shit that would be seen at the Anthrax circa 88/89. Those green kinda chino pants, huge crewnecks and huge Nikes. That would do for me.

Ok this is it, last question: Top 5 Lockin’ Out releases?

Oooooh tough one. For me personally it would be