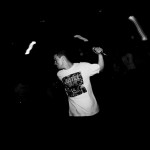 Being the nerds that we are, we usually know about good new bands coming up. And then to my surprise Powered Records announced that the label is back from the dead and will be releasing the EP of a new Belgian band called Blindside. Time to ask drummer Steven about the origins of Blindside, gambling problems and how he spent his summer vacation.

So first of all how does it feel to be the band that brought Powered Records back to life?

We love Powered Records and everything they have done. When Filip said he was going to release our demo we were thrilled and we can’t thank him enough. Everything they do, whether it is making a fanzine or putting on a show, always happens with the right ‘vibe’. Every band on it is amazing and we’re really glad to be a part of it.

Tell us something about the origins of Blindside, when did you start the band, what was the first song you tried to cover and were any of you in bands before?

Christian, Amir and me (Steven) wanted to do a band for a while but we never really got together to do anything serious until a few weeks ago our friend Maxime hit us up about coming to Paris because he was home alone. We left half an hour later because we were bored. He has a recording studio so we could record some jams for free and basically me (Steven) and christian just wrote the whole demo in less than an hour.

We actually only practiced once before we played a short surprise set at Break Out Fest. We opened with The Abused – Loud And Clear into our own Intro/Blindside so that’s the only song we’ve covered so far.

Do you guys still study or do you have jobs, what do you study?

Everybody is studying except for Christian. He’s in the military. Amir is studying physiotherapy, Kasper is doing med school. Joey is about to start studying  graphic design and I study communication and multimedia design.

This summer wasn’t the best ever, how did Blindside spend the days?

Summer rules. We spend our days jumping off bridges into the water, hit up swimming holes or do stupid things (’t kastheelhof!) with our best friends. Every summer I try to break my own personal record eating French fries. I ate french fries for 23 days in a row this year. Christian and me also have a gambling problem so we hit up the casino from time to time.

Every summer I try to break my own personal record eating French fries. I ate french fries for 23 days in a row this year.

How did you get to know about hardcore and what made you coming back to shows?

I used to listen to punk music a lot when I was really young. Through punk I got into the older hardcore bands but wasn’t really familiar with hardcore shows at that point. Then I met Joey in art school and he introduced me to his friends and took me to some shows. I kept coming back to shows because hardcore is the coolest thing in the world.

Blindside is a straight edge band, are you also advocates of a vegetarian lifestyle?

Kasper is vegan and Joey is a vegetarian. All of us used to be vegetarian at a point and we respect people that still make that choice.

Are you also a social political band or are there other subject you like to bring about in your lyrics?

I mean it’s not that we don’t care about political issues, but it’s not our goal to change people’s minds about voting or anything. People should care more but it’s not up to us to make them realize that.

What is your top 3 Belgium hardcore records ever?

This is REALLY hard to answer. Every record Justice, Dead Stop, Rise and fall, True Colors, LAC… have put out is flawless. If i’d have to pick three records;

Which current bands make you all excited about hardcore?

The Belgian scene has been one of the best European scene for a while now with bands like Congress and Liar, Rise and Fall and Dead Stop, Justice and True Colors doing good internationally as well. How come such a small country has such a good scene?

Everybody knows everybody. Doing a band or setting up a show is literally a phone call away, we are the living proof of that. People support each other a lot and I think that’s what made our scene stand out for these past years. All you need is 1 good band that gets everything going. We had Dead Stop and Justice. Kids went wild.

Things WILL get better again. Start your own band, do a zine. We’re in this together.

The Powered newsletter about the Blindside ep also talked about the Belgian scene not being that great at the moment. But with bands like Oathbreaker, Midnight Souls, Accept The Change, Blade and Not Afraid still a lot seems to be happening. Do you have the idea things are getting worse at the moment and why?

We still have a bunch of good bands but the turnout at shows sucks lately. It’s hard to book shows without only 20 people showing up except for a few places maybe. I don’t know why things are getting worse but i don’t think it should be an excuse for people to turn their backs. It’s so easy to say that “it’s not like it used to be anymore” and drop out of hardcore. Things WILL get better again. Start your own band, do a zine. We’re in this together. It’s our destiny! listen to Straight Ahead.

Thanks for the interview. Shout outs to Title Fight and Not Afraid.

You can listen to the demo on the band’s Facebook.