When a band says “for fans of Iron Age”, I get interested. Can’t help it. I need to click on that link, I need to hear it. Most of the time what you’ll hear is terrible. Sometimes it’s good. I liked Brontide, especially when I read they’re just starting out and are 18 years old. Mentioning Black Sabbath didn’t hurt either.

Hey Dan, how about you introduce yourself?

My name is dan white and I play drums for the band Brontide.

What’s happening in PA at the moment? What’s on your mind?

At the moment, summer is in full swing and we’re trying to get things moving with the band. We all just graduated high school so that’s pretty cool.

How did the band come together, any previous bands that we should know of?

Well Bryan and I have been good friends for a while making music since freshman year of high school, none of the bands ever went anywhere. I met Tyler in Chemistry class two years ago, and we really seemed to hit it off. He was really into bands like Black Sabbath and Metallica, and I found out he shreds on guitar so we talked about starting a band for an entire year before it actually happened haha.

For genres you did write down Metal, Stoner Rock and Sludge on your Facebook profile, I discovered you through a topic you posted on B9 though and Iron Age is amongst your influences. So how big of an influence is hardcore?

I’d say the hardcore influence comes mainly from me. I have been a part of the scene for about 3 ½ years. I used to play guitar in a youth crew/lockin’ out style hardcore band called Time’s Up. I’m into all types of hardcore but the bands that influence my drumming would be stuff like Violation, War Hungry, Dead End Path, Mother of Mercy, and New Lows. Every now and then during songwriting I think I suggest slowing things down and getting heavy, almost like a mosh part, even though were really not that type of band. Our first show we played alongside hardcore locals Wrong Answer, Rock Bottom, and Sawed Off, and we anticipate to play more shows in the scene so in one way or another hardcore most certainly is a part of who we are as a band.

What’s your favorite Brontide lyric so far and why?

I think I’m more stoked on the concept of the album as a whole than a singular lyric. Bryan is pretty into greek mythology so we wrote this whole album about Atlantis, the power struggle between humans/gods, and some other cool stuff like that.

How would you describe the band to people that never heard you, without mentioning any band names that is.

My description would be, loud as shit haha. But really, we play music that (we think) is a nice mixture or stoner, sludge and hardcore, with technical guitar work, heavy drumming, and aggressive vocals. We put a lot of thought into the sound and structure of each song, and we really hope people see that.

What are the (future) plans for the band?

Basically, more shows, more songs, more recording, possibly some merch. We all really have fun with Brontide, and we hope we can expand our audience to people who like different kinds of heavy music, you know, hardcore, stoner, sludge, etc., etc. It sounds stupid, but the fact that 100 people like us on facebook still boggles my mind, and i hope that number continues to grow.

When they’re done reading this interview, what do people really need to remember about Brontide?

Pretend to be “Miss (or mister) Universe” for a second, I’m curious to see what you come up with for a question like this. If you could go back in time and change a single moment in history. What would it be and why?

I believe if I went back and changed something that it would most likely screw up the present, and who knows what that could lead to. But, I’d like to go back to see the assassination of JFK, I’ve been to where it happened and seen/read a lot of things so I think that would be rad. Or watch the Hindenburg zeppelin explode haha I’d show up with a bag of popcorn and tell everyone “just wait, it gets good”.

Ok, let’s close this off. I’m going to let you take control. Ask yourselves a question, and answer it too.

What do you want to do with your life?

That’s it! Thanks for doing this! Any final words?

Thanks Pim for doing this, your blog is cool and I’m really stoked to have been interviewed for it.

Shout out’s to Andrew Schroker for always being there, Jake Clarke for recording us, and anyone who we have played a show with or checked us out! Spread the word, because we’re not going away anytime soon.

Listen to their EP right here: 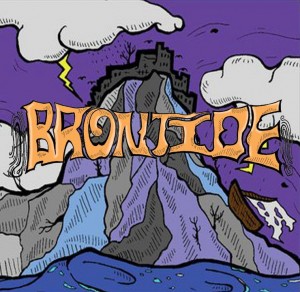