I already heard about them but after finally seeing them on stage I just knew Cheap Drugs was a band more people should know about. They’re fast, loud and from Belgium. What more could you want? So go ahead and let me introduce Cheap Drugs.

Cheap Drugs is the band name. What is the cheapest drug you’ve tried so far?

Pie drinks a lot of beer, Jojo and me like some rum cola once in a while and Tom is still clean. We are not into doing drugs but our bandname hasn’t got anything to do with that. Actually Jojo and me got it from a Danko Jones song called “she’s drugs”. Jojo is a master in making up lyrics during roadtrips.

I heard somewhere a couple of band members were in Vogue before. What is the big difference between both bands when it comes to writing music?

Both Jojo and me were in Vogue. We were also together in Turn The Screw and One Voice. Actually we’ve been doing bands together ever since I learned to play bass. When it comes to writing music there’s some differences: In Cheap Drugs Pie and me write all the riffs, Jojo comes to Antwerp once in a while to rehearse and then we play him all the riffs. We put together the song and then Tom fits one of his lyrics to it. We only rehearsed 5 times with the whole band to write the 7 songs for the demo. With Vogue it took quite a while to write songs. It was mostly the guitar player who wrote all the riffs, figured out the drums with Jojo and in the end they taught me how to play the song. I was only really involved in writing the slow songs. Also the riffs in Cheap Drugs are more catchy and the song structure is pretty simple.

We only rehearsed 5 times with the whole band to write the 7 songs for the demo.

I loved your set at Crossbone Fest and think you’re making quite a name of yourself in Belgium. Do you have any plans yet to go across the border or did that happen already and I just wasn’t paying attention?

Thanks! We were really looking forward to Crossbone Fest. It’s very DIY and Jordi does a great job. Since we started we just play as much shows and festivals as possible. Tom & me have been booking bands for a decade, so we have lots of contacts through doing shows and playing in bands. We now played Holland a few times, which was great. In may we are going to the UK with VVOVNDS for the first time. This summer we play France with REPROACH. We are sure planning to tour Germany since our demo and 7” got released on the German labels Hardware Records and Yakuzzi Tapes. We wanna play Fluff Fest as well, even if it’s just on the campsite in a party tent.

What are you favorite 80’s hc bands and which current bands do inspire you?

I think all of us grew up listening to Negative Approach, Black Flag, Minor Threat, DYS, No Trend… Current bands: Fucked Up, Ceremony, Pissed Jeans, Reproach, OFF!…

What’s your opinion on the Black Flag/ Flag reunion? And on bands reuniting in the first place?

Who are we to criticize them? We are all Black Flag fans, who isn’t? I don’t really look forward to seeing bands reunite, especially when they change their line-up just to tour. I have seen some good reunions (Negative Approach, Underdog,…) but I have also been very bummed to see Bad Brains in a big venue with no atmosphere and Reagan Youth at Ieperfest. If you’re going to reunite, make sure you put some effort into it. 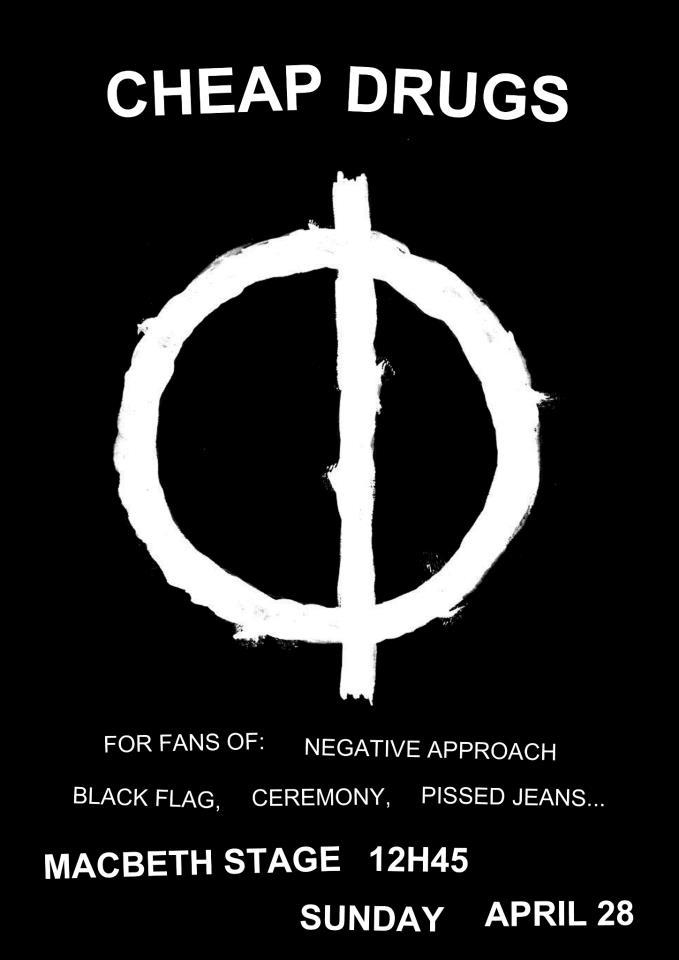 We haven’t had a pizza hangout yet, but we do have a habit of stopping at gas stations on the way home and buying a bunch of chips and candy.

So what are you next plans? A new release? World domination? Eat pizza?

We are doing a 4 way split 7” with King Terror, Fuck Ups and Toxic Shock soon. It will have a few songs from each band. After that we are going to write and record another 7” and release it on Hardware Records. Chris Hardware has been great to us, so we’re going to stick with him for our next vinyl releases. We sure want to release an LP in the future and play as much as possible. We’ll start with Europe and see how big it gets. We haven’t had a pizza hangout yet, but we do have a habit of stopping at gas stations on the way home and buying a bunch of chips and candy.