Curious as I am I wanted to take a peek behind the scenes of the music industry by interviewing folks that make it possible for the bands we like to really shine. This resulted in interviews with studio/label Amsterdam Recording Company and Fitz who’s not only part of Noviot Pochetok, but also runs his own label. Unfortunately, I’m not only curious, but also a bit lazy. I could of course say I’m busy, but let’s not lie. Recently I got in touch with Indy Powers of the small, just started label called Coin Toss Records. The few releases the label has out sound promissing. Time to ask him some questions, which he kindly answered.

How did you roll into this business?
Well, I have always wanted to run a record label. I have attempted it two other times and didn’t have the best of luck. I love music and collecting records though, and I want to directly support bands and their music. So I figured why not start a label and do all of those things.

Giving it another shot, huh? Based on this answer I’d like to ask you, on behalf of all those who are thinking about starting their own label, what traps are easily avoided? What not to do when starting up a new label?
I would say for me I was so excited to put out all of these records from these bands that I rushed some of the releases and didn’t give them the push/exposure they should have gotten. So I would say: “just take your time and give your all to every release.”

Solid advise there. I’ve read online you worked as a tour manager. Are you still doing that?
I stopped touring about a 1 1/2 ago, I have a 5 year old son and another boy on the way. So I wanted to be home with them and watch them grow up and be there for them. I toured for 13 years and I loved it, but family first. 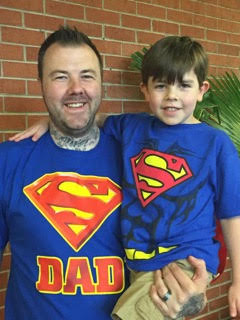 just take your time and give your all to every release

Everyone can understand that. On to Coin Toss Records. Although all bands on your label are hardcore or punk related you’ve got a pretty diverse roster so far. What’s the philosophy on that and how do you select bands for Coin Toss?
It is really just anything I like. When I find a band whose sound I like I will reach out to that band and see if they are interested in working together with CTR. And Although I have put out more Punk and Hardcore stuff, The Killer Shades and my upcoming The Record Collection and The DSGNS/Venomspitter records are a little different, but the members come from the Punk/Hardcore world and are great dudes.

So, if you are the one reaching out: how do you track those bands down? Are you surfing the web whole days in pursuit of that one band or is it really word of mouth marketing?
In most cases the internet is to blame. I’m always looking for new bands and music. Some bands have been word of mouth like The Record Collection, DSGNS and Venomspitter.

You release only digital, vinyl and tape, but nothing or very little releases on CD. More and more labels seem to do so (well, perhaps excluding tape, perhaps). Are CD’s a format going extinct?
I don’t think they are, I have only really put out two releases so far that could make it (in my mind) to a CD. One being the Ends Meet record. It was up on bandcamp for a while and available on tape, so I just wanted to do vinyl. The other being the Killer Shades tape; the band wanted to do a CD, so I did the tape. So it’s not that I don’t want to release anything on CD. No, I want to do a CD, but just need to wait for the right release.

So, who decides on the format on which an EP or album is released?
Me and the band discuss what their plans are and how many songs they have ready and/or want to record.

Not a bossy label, huh? Let’s talk sales: how’s sales when you compare digital to vinyl or tape?
Most of my release physical copies outsell digital for sure, and as of now I have only charged for one of my digital releases. Now they are all free on my website or name your own price on bandcamp. I figure you should get the music in people hands and if they like it, hopefully they will buy a physical copy. I do have some of my releases on ITunes/Spotify/etc. You can’t really control the prices on those sites, but people can stream them while at work or if you’re more of a digital person and like Itunes you can get it there too. 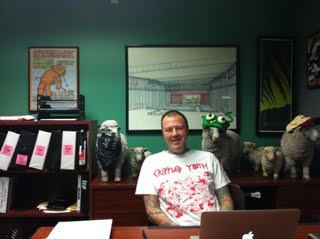 I figure you should get the music in people hands

Do you usually release something together with other labels or as a Coin Toss Only release?
The Drug Control 7” I did as a split release with Straight & Alert record in France and it has worked out great. I would love to link up with a a label in another country to do more split releases. That way people in other countries don’t have to pay as much for shipping and it helps the band and release with distro and exposure. All my other releases are just me.

Please talk us through the process: who selects a studio? Who decides on the artwork? Please talk us through from signing a band to sending out the records.
The band choose the studios. Artwork we will discuss. So far the bands have done or had someone do the artwork for the releases. To be honest I don’t really sign any bands; the music belongs to the band and always will. When me and a band decide to work together,we agree on how many we are going to press and colours and covers. Then, when I get the records the band get a percentage right off the bat to help pay for the recording and just to help them make money. After that the band can buy copies from me for cost (plus shipping). Once the pressing breaks even the band will see money from the release (physical/digital and merch if there is any).

I look at it more of a partnership between me and the band, and they are allowing me to release their music. So I want the band to make as much money as they can to keep touring and making music. I do what I can to make that possible.

Some labels start their own festival as well. Any plans in that direction?
No, I just want to focus more on releasing records and promoting the label and releases

If you ask a parent which child he likes most the parent will most likely claim to love all children equal. How about a label-owner on his releases? What’s your favourite? Which one makes you most proud?
HAHA! Of course I like them all, or I would have not put them out, but the Spirits record I love! Charles (from Spirits) has amazing ideas for layouts and promotion, just everything. I have learned a lot from him and am still learning.

Let’s talk dreams a bit: which band should definitely reunite to release a new record on Coin Toss Records?
For me and being from Indiana: I would love for Split Lip to get together and record another record. There are a lot, but that is the one that come to mind first.

What can we expect from Coin Toss Records the coming years?
Just more releases and get more people interested in the labels, bands and releases. Check us out on Facebook or our website.

What should we look out for in the near future (from Coin Toss perspective)?
Well, I have a couple 7” in the works now. CTR-6 will be The Record Collection – Revolutions 7”, a mix of The Gaslight Anthem, Tim Barry and Bruce Springsteen. CTR-7 is a split 7” from DSGNS and Venomspitter, both heavy bands in the vein of Botch, Coalesce, and The Dillinger Escape Plan.

Which record did you buy lately and what’s your thought on that? Did your perspective on a record change now that you own a label yourself? I can imagine you’d think “I would have done this different” for example.
I buy records all the time (probably too much). I don’t really judge the record/band/or label, I am just excited to have the record. If anything, I might be jealous I didn’t get to put it out.

And that’s it folks. Make sure to check out Coin Toss Records sampler: