‘Street by street, block by block taking it all back’ Earth Crisis has come a long way since say started spreading the ideals of animal liberation and straight edge in the early nineties. A couple of weeks ago their latest record ‘Neutralize The Threat’ came out and guitarist Scott Crouse found the time to answer a couple of questions.

We didn’t reunite just to do a tour and one record. 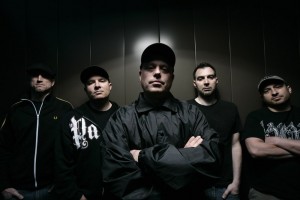 I guess you were comfortable with the way ‘To The Death’ was welcomed in the scene as the comeback of Earth Crisis  otherwise there wouldn’t be a new record this fast. Or did you just have much material on the shelves which needed to be recorded?

I’m constantly writing music, so we definitely didn’t have a lack of material, but we really wanted to do another record to show that we are back as a band, and didn’t just reunite to do a tour and one record. I feel like a second record legitimizes us as officially be back.

How do you guys make a new record. Do you guys write the music and the lyrics separately and then try to see which will fit where?

I write the majority of the music at home, then present it to the other guys for input. I have a lot of the vocal placement in my head while I’m writing, but Karl and I do a lot of that together once the songs are roughly laid out.

Every song on the new record is inspired by a certain group of activists. Can you explain in short which song is about which group and why they are an inspiration for Earth Crisis?

We have songs on the album about The Black Panther Party (Askari), Bernard Goetz (Neutralize The Threat), RAAD (Total War), Peter Young (By Conscience Compelled) and Los Pepes in Mexico (The Eradicators.) Overall, what we admire about these groups in the unwillingness to be victims. When they, or others around them, were threatened they fought back.

Who came up with the idea of building up the record like this, as it is a first for Earth Crisis?

This concept was Karl’s idea. He wanted to tread new ground lyrically, while still retaining some familiar themes that Earth Crisis has become known for.

What do you think makes a bigger impact, being an underground animal liberator or spreading the message of veganism and animal liberation all over the world with a band?

I think they are both equally important, and actually work hand in hand. Without someone to spread the message of who, and why, these “underground” actions are being carried out, the general public would just see them as violent and senseless. We, and other bands, websites, and organizations, explain the reasons and motives behind them in hopes that people will understand that there is a more than just vandalism behind these actions.

Has ‘To The Death’ and the new social media stuff opened up doors for Earth Crisis which were shut before you all went on a break?

I think we are much more accessible now. We are able to interact with fans, and critics, of the band much easier.

There’s a new generation growing up who music pay homage to the hardcorebands of the 90’s. Foundation is a good example. Do these type of bands inspire you in turn?

Honestly, I’m not as familiar with them as I should be. I do hope they succeed in causing a resurgence of thought provoking lyrics, and the spirit of activism, that was around in the 90’s.

With Earth Crisis touring again, as well as Strife and Snapcase it’s time for another California Takeover. Would you like such a show/tour to happen?

Could you, like aforementioned bands, just tour on old songs without writing and recording new music?

Sure we could, but we enjoy writing and recording as much as playing live. For us, doing new music comes with the territory.