Has the edge gone dull? It seems like in the Netherlands it has, but luckily there’s hope. Enter Echoes, a new ‘all-star’ band putting it back on the map. With (ex) members of the Crivits, Birds Of A Feather, A Step Apart, Eye Of Judgement and Civil Terror (amongst others), you know the outcome will be interesting at the very least.

Read on to see what singer Jasper has to say about the band.

Hey Jasper, let’s drop right in and get this one out of the way right away: Who’s in the band and did they play in any previous bands?

So what’s going on at the moment with Echoes? You guys played 1 show and released a demotape/CD so far right?

That is correct. Well actually, we played two shows, but the first show was with a stand-in bassplayer (thanks Gideon) so that show does not really count. The demo tape/CD that is out now was just released in a very limited run for the show we did last weekend. There will be a proper version of the tape available from us soon, while the nice folks over at Final x Letter from Japan will put out the demo on tape in their part of the world.

And how about the future?

We wrote about ten songs, in the same vein as the demo songs. We will be recording a bunch of those songs – perhaps all of them – and plan to release a 7” sometime after the summer. We are currently looking around for a label that can help us out with that. Luke is our recording man, with his little laptop we just record in our rehearsal space, totally DIY, and he is really good at it. We plan to do some more shows in the future, probably in Belgium and Germany.

I think you guys are the only straight edge band in the Netherlands at the moment, right? How do you feel about that?

Straight Edge is a personal choice, made by some for personal reasons, by others for political reasons. It does not seem to be a very popular choice in this day and age. The only thing we do is try to live a life that matches our ideals. Not to be an example or role model, but just to hold our ground. Then again, although we are all Straight Edge, which means a lot to us, it is not the main focus of this band. For us Straight Edge is a starting point, not the end. In some way we want to make a difference not by just playing music, but also by speaking out. Whether it is about politics or Straight Edge, both are issues that we like to talk about.

What’s your favorite Echoes lyric so far and why?

The lyrics to the first song we posted online, Denial. I wrote them a few years ago with an Inside Out/Chain of Strength/Against the Wall vibe in my mind and the first song Marc came up with for Echoes fit these lyrics perfectly. The lyrics are about the United States refusing to sign the Kyoto protocol, and deeming themselves above international treaties that are intended to preserve and perhaps even heal the environment.

What’s the one thing people should remember about Echoes after reading this short ‘interview’?

That we are a band with a hardcore, punk-rock attitude about DIY-ethics, a band that has something to say, and where the music matches the lyrics. We are not just another band that plays heavy music with the sole purpose of getting people to move their feet. We want to make people think about subjects that matter to us.

Something else, what’s up with you sounding totally different in every band you do? How many voices do you have (not counting the ones in your head)? It’s impressive.

I do not think I sound completely different in this band. I think it is similar to singing in A Step Apart, the difference being that I am a couple of years older and have been singing longer.

If you could change anything in the world right now, what would it be? World peace can’t be done, you of all people should know, so that’s not an option.

Probably the, in my opinion, downward spiral of egocentric thinking – in the broadest sense of the idea. In politics in general (and Dutch politics specifically, to keep the topic close geographically) there has been an enormous shift towards right-wing politics the past, say, ten years. This has led to more and more xenophobic ideas that have been accepted by the majority of our society. Right now we have a minority right-wing cabinet with ‘gedoogsteun’ (I do not even know the right English word for it, which is quite typical since in this case it is just as loathsome as that other Dutch word “apartheid”) – pre-bartered support for cabinet policies, by a political party with a completely undemocratic structure. A party that, in their election campaign, stated that they support the idea of ‘ethnic registration’. Sadly, most voters either read over this line, did not read into the ideas of the party at all, or simply did not care. These last ones, and the ones that agree with that idea, are the people that make me angry. They are the pinnacle of that egocentric thinking that I despise, and those ideas spread to every aspect of their lives. For them, politics are just a way to further their individual goals, just like eating meat or having no consideration for the disastrous part humankind is playing in the desecration of this planet.

Ok, get in control. DIY. Ask yourselves a question, and answer it.

We do not. We like to play in a band, because we are punk-rockers and we love all of this. It is great to meet people in person that we have known for years and it is great to meet people that are doing shows, squats and so on. There is bound to be repetition because all the members of this band have been into this kind of music for many years now, but everyone has to start somewhere. All we can do is encourage new kids getting into hardcore and punk-rock, accept that a lot of them will go through the same phases as we did, and not act like a bunch of know-it-alls.

Thank you for being the first publication showing interest in Echoes. For those who are not familiar with the music of the band, check Echoes out on Bandcamp), Myspace and Facebook. 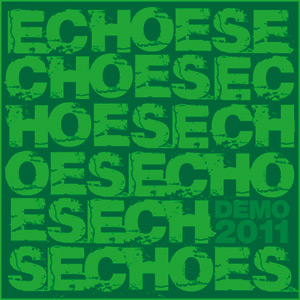