Rold was pretty stoked on their demotape and when Henry (UnionWithTheAbsolute on here), the European / Take It Back promomachine said I needed to interview them, it was kinda hard to say no haha. So here you go, meet El Camino Car Crash from Austria.

Hey, what’s on your mind?

I’m currently sitting in my home base in Vorarlberg. Work is done for today. In the evening there’s a show with The Tidal Sleep from Germany and Xerxes from the States,
I’m exited to see this bands.

What’s happening in Austria at the moment?

I think not much more than in other countries. People kill people, corruption affairs, violation. It’s not the happy and friendly country it was 10 years ago. In my youth I read the newspaper and the bad things happened outside Austria. The past years we had to accept that war happens in our country too. “The people were shot in the streets at daylight…” this was a headline in a American newspaper a few years ago, now in an Austrian one. But every country has its good sides. We have our clear water haha.

El Camino Car Crash… I take it you took your name from the Swing Kids song?

Yes thats true, it happened more by accident when we were thinking about possible band names. Gilli came up with that name as a joke, but everyone agreed. The name has nothing to do with Swing Kids in general. 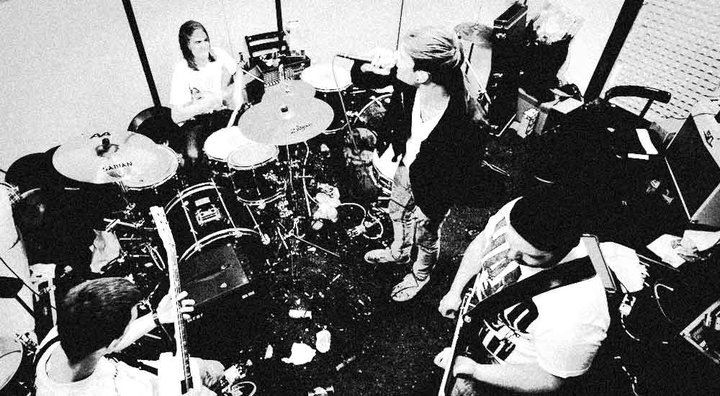 Every country has its good sides. We have our clear water haha

To anyone that never heard about you guys before. Who’s in the band and what’s El Camino Car Crash all about?

El Camino is a collective with four core members (Christopher – Vocals, Dominik – Guitars, Willem – Drums, Gilli Guitar) and some friends of us who help us out on the bass. It’s a bit difficult to get shows because they’re playing in other bands who have their success in this area too.

For the guys who were in other bands before. Any lessons learned, doing anything different with this band?

Every time you start a band it is a different thing than that band before. Some of us played in a metal band before. The focus is so much different than in this band. At the beginning of this process of developing a band it’s all about fun… playing shows… having fun. If the band grows up, the business part is getting bigger and bigger. Your life develops synchronic to this process. You’re out of school. Have a job or a study thing. So you try to handle your life, the same thing goes for the band. Experience. So… What we do different with this band is easy. We do it with more experience.

On Facebook you state ‘newspapers’ amongst others as your influences. What’s the last story that truly grabbed your attention and why?

Newspapes are influences because 97 % of the stories are bad news. It’s not a big deal to tell a story how bad life is. Everything you need is a newspaper and glasses. You get a better and better promotion with bad news, like the past showed us like the war in Iraq or the protests against Husni Mubarak in Egypt,and nothing pushes economy more than war. And that’s something newspapers won’t just cast aside. It’s profitable propaganda.

You guys just released a demotape on Take It Back Records. What else is happening for you guys at the moment? And how about future plans?

Currently we’re writing new songs, searching for shows and creating a plan to clean up the rehearsal room haha. At the moment it happens a lot. Gilli and Willem are going again to school (losers haha 😉 ). Christopher is doing this study thing. We grow up to be adults and have the responsibility for what we’re doing. We hope to tour next year with some good friends, having a good time. The other thing is to release a full length.

What we do different with this band is easy. We do it with more experience.

How about your favorite El Camino Car Crash lyric and why?

Our favourite line is: “I am trying to stop the world to change my behaviours.” Why?I think that today’s society is always trying to force you to think the way they want you to think, or look the way they want you to look like. I think as a human being you have the freedom and the right to choose what’s right for you, no matter what others may think or will say about you. The promotion and all the company shit influences a lot of people. You talk to those people, you share your life with them, and this lyric line should inspire those people to break this cycle.

Time for the good old miss universe question again: If you could go back in time and change a single moment in history. What would it be and why?

Hmm, that’s a good question. The problem that I have with this question is: If you change something in the past, what happens then? So If you go back in the past to the moment Lee Harvey Oswald shot John F. Kennedy and stop him doing this… what happens? I don’t know. If one door closes, an other will open.

When people are done reading this short introduction, what should they remember about you guys?

They should remember that we are four guys who love to play music, sharing time together, in order to escape the daily routine and maybe inspire people with our music. We don’t want to try to change the world, you can’t change the world with a few words and some music like others always trying to preach. A famous person once said if you want people to change, be the change. We just try to do our thing, reach a few people in the audience, and when somebody is coming to us after our set, and tells us that they liked our show then it is exactly the thing that gives us credit for doing this band.

Time for you to take control, ask yourselves a question and answer it too. I’m sure you can do better than these generic questions I’ve came up with.

A thing that I always want to know is, what happens when you died? Are you dead? Life goes on in another body? The answer is… I always wanted to know what happens. I will ask myself in 50 years again.

That’s it. Anything else to add?

It would be cool to play in other cities and meet new people, to make new connections and first and foremost new friends. So if somebody is interested in us and our music, drop us a line and we try to get to you as soon as possible. Thank you!