ESC Life’s debut album Access all areas impressed me. There’s a bandcamp player at the bottom of this page. Nothing can stop you now from checking them out. But… let’s not waste your time by writing a very long intro, let’s get to business straight away. I asked the band a couple of questions, this is what they had to say.

Who is ESC Life?
Elvis: ESC Life is four guys in their mid 30s. We are long time friends and we have all been in various bands before. We used to hang out or play shows together, but have never before been in a band together. So we decided to change that. The idea for this band existed for a few years, but there was always something in the way… Narantxa plays bass and sings, Ante plays guitar, Sanjin on drums and I play guitar and sing backing vocals.
Ante: So yeah, we are just a couple of guys that realized they’re growing up and that they don’t like new music, unless it sounds like it was made 15 or 20 years ago.
Narantxa: Oh, I love new music, but I don’t feel obliged to create something “new”, “original” or “groundbreaking”. We’re much better at doing this. Someone, I think Billy Childish, said that originality is overrated and I couldn’t agree more. These songs sound great the way we play them, and there’s nothing wrong with that. Having said that, we’re not playing safe. We try to push ourselves, even though we’re playing “old school” indie rock. It has to stay fun, and autopilot mode is far from that. The Ramones, for example, were unfairly accused of playing the same song over and over, but that’s not true, they tried a lot of different stuff before wrapping it up.

I don’t feel obliged to create something “new”, “original” or “groundbreaking”.

I couldn’t agree more. Now that we’ve got that out of the way, let’s start with one of the first things mentioned in the press info that accompanied the promo for Access all areas. You toured with Grant Hart. How did you get in touch with him?
Elvis: Well, I know Grant for a couple of years. I was his tour manager for Europe in 2010. We have been friends ever since. I have sent him some ESC Life stuff. He liked it and invited us to join him on his Euro tour in October 2014. Of course, we said “HELL YES!”. We were an opening act, but also his backing band.

Any experience from that tour you wish to share?
Elvis: It was an honor to play with such a legend. Grant has been in this business for a long time and there’s a lot you can learn from him. He is a very funny and intelligent guy. Besides, we shared a van 24/7 so he was “one of us”, no special treatment. Also, he taught us it’s more important to have dinner than do the soundcheck…
Ante: We had a lot of fun with him, and traveled a lot of miles with him, we share the love for Balkan cuisine.
Narantxa: We were a new unit at the time, so his wish to improvise a lot on stage really helped us get to know each other musically. Team building through “work.”. Grant never plays it safe, and that’s one of many reasons why his solo records are great. You can only guess in what “artistic direction” he’s going to go in the next song, let alone the whole record. 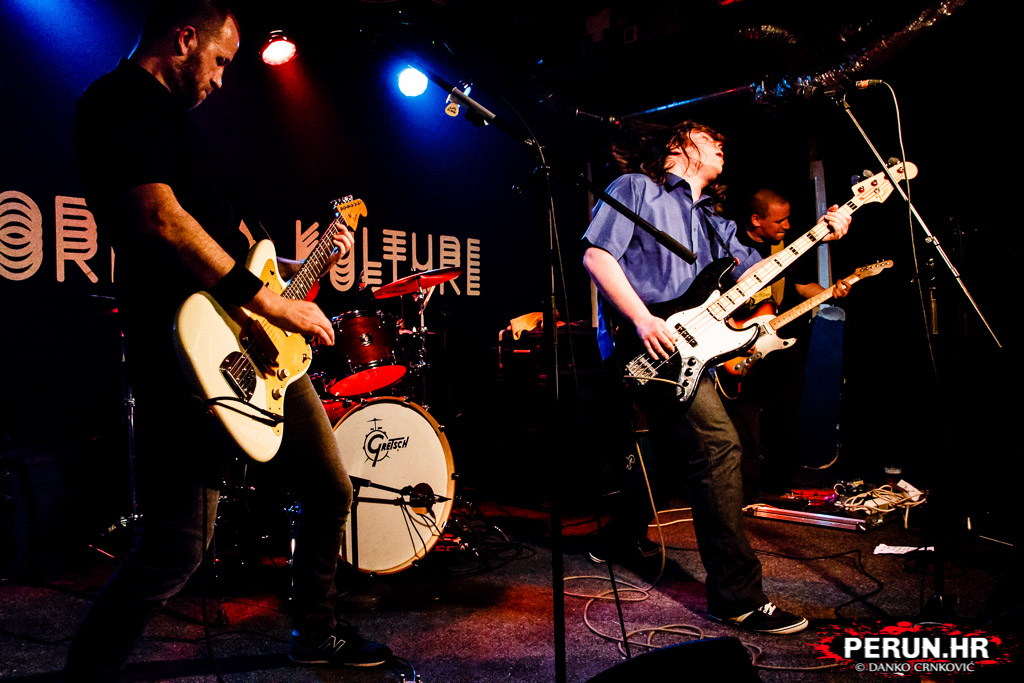 Also, he taught us it’s more important to have dinner than do the soundcheck…

Sounds great. Let’s focus on ESC Life a bit. Somewhere along the line you wrote a complete album. How does the writing process work for ESC life?
Elvis: The process of writing usually looks like this: Narantxa records something on his 80E Chinese acoustic guitar and sends it to us. We listen to it. Usually we don’t like it. We come to the rehearsal and play it. Ante adds solos. Now that’s more like it! The album was almost finished when we started the tour with Grant. We recorded it when we returned from the tour because we wanted to use that momentum and the fact that we sounded super tight at that time. So we recorded it all live in 2 days, with a minimum of guitar overdubs.
Narantxa: I love John Darnielle, but I’m not that interesting without a backing band, and I have no interest in playing guitar. Whenever I write a song, I feel that it would sound a lot better with guitar fireworks, loud drums and overdriven bass. I love when we all brainstorm, slice it, try different directions, play with harmonies, add solos and stuff. That’s my favorite part.

Haha, yeah beef up the sound a bit, huh? Let’s talk ambition a bit. I’ve reviewed some bands from the Balkan area that didn’t choose English lyrics. You did. Are you aiming for an international audience?
Elvis: It’s not something we did intentionally, having in mind a big international career. Although, we plan to tour Europe (fall 2015), so it can definitely help.
Ante: Some say that our language isn’t melodic, I disagree, but Nara always wrote in English, so it’s natural to him. We don’t have some grand illusions about international fame, although it would be nice to play concerts all around Europe.
Narantxa: You won’t get much airplay here, but things are starting to change. I hope we’ll get a Croatian equivalent of The Knife one day.

A Euro tour with Grant Hart, now another tour. How do you guys combine being on the road your day to day lives? Are your bosses supporting you pursuing your dreams in ESC Life?
Elvis: I’m a freelance translator, Sanjin works at one of the best underground venues in Zagreb, so we don’t have problems with days off from work. Ante is a journalist and Narantxa works at the record store owned by a record label so his boss is understanding. Ante takes days off when necessary.
Ante: Well it’s starting to take its toll. You know, recovery time after nights of playing and partying is getting longer. But people that work with me are cool and used to it.
Narantxa: It’s a challenge we’ve all accepted. It would be pretty impossible for us to book a two month tour, unless we all become freelancers, but that would require a lot of discipline. I’d accept that challenge and hope no one steals my laptop. 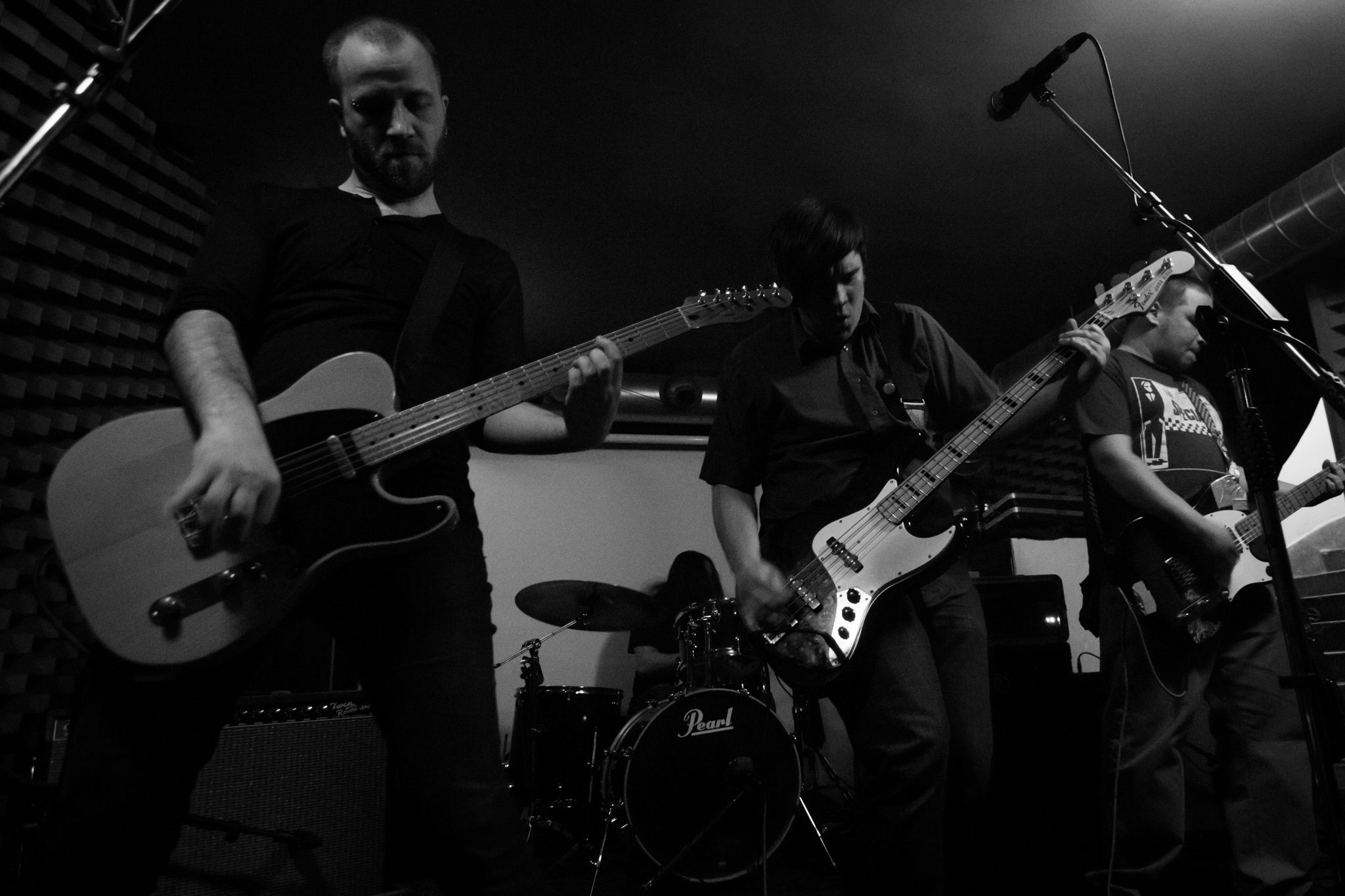 We recorded it when we returned from the tour because we wanted to use that momentum and the fact that we sounded super tight at that time. So we recorded it all live in 2 days, with minimum of guitar overdubs.

I totally recognize the getting older part, haha! Are lyrics important for ESC Life? If so, what subjects do you discuss?
Narantxa: Sure they are. We’re not trying to piss anyone off or spread political messages, so it always sounds funny when someone refers to us as a punk band. We’re people in our mid thirties with love for life and I like to sing about it. They’re about people, life and love. Lyrically we’re closer to Teenage Fanclub than Dead Kennedys. Punks would say musically as well.

Well, not all punk bands are selling you their political views of course. But talking about punk, do you feel you are part of (or related to) the punk scene? And is that label helping you or is it a bit of a handicap at times? I can imagine you’ll be playing for a whole different audience when labeled punk instead of indie-rock for example.
Narantxa: I’m glad that scene is not that polarized here. It’s a small scene so that makes sense. Somehow we’re stuck between two sounds and two scenes, and that can be tricky. You can be hated or misunderstood by both crowds, but so far we’ve witnessed the opposite of that.

Talking about a scene: which bands from Croatia should we definitely check out?
Elvis: I’ll say Kandžija, but you probably won’t like it because it’s a hip-hop act. If you ask me, XAXAXA from Skopje are by far the best thing that happened in ex-yu music in last 5 years. But you already know that.
Narantxa: I prefer Serbs, so I choose Repetitor.
Ante: Analena and Lunar are my favorite bands that sing in English, Benchwarmers also. Mašinko are a great pop punk band, Brkovi are a great ethno punk band. Seven That Spells are cool. And a couple of MC’s but they rap in Croatian. Our label was made by guys that were in the punk and reggae scene, so they are used to the whole DIY thing. I love playing with other punk bands, and for punk audience.

Thanks, I’ll look into those bands soon(ish). You choose Bad influence as single for the album. To be honest, it’s not my favorite song on the album. So, why this song?
Ante: It had the catchiest riff.
Narantxa: Bad Influence sounded like a single, and I think we’ve made a good choice – radio loves that kind of songs.

How’s the album received so far?
Elvis: The reviews are great. The critics love us. That probably means we won’t make any money.
Ante: Yeah, there’s like a whole trend here, guys in their 30s playing college rock. I guess it’s a way of escaping from our bleak existence in a poor, corrupt country.
Narantxa: Critical acclaim really surprised me. I expected people to hate our plain and simple style, but even critics who aren’t big fans of this approach had to admit that the songs are really good. I really liked that, because that’s the most important part.

To close it up, what do you hope to achieve with ESC Life?
Elvis: Our goal is to play as much shows as possible and to have fun along the way.
Ante: I would add drinking craft beer, and eating nice food.
Narantxa: Make a bunch of good records.

And that was it. Make sure to check out their record and go see them live later this year!