Sometime ago we reviewed Train Wrecks, an EP by Habits. This EP wasn’t exactly a train wreck so I decided to ask them a couple of questions. Guitarist/singer Mike Ligocki provided us with a couple of… uhmmm… interesting answers.

I like to start out interviews easy. Let’s start by introducing the band. Who’s Habits?

Mike Ligocki, Mark Helfman and Rob Vansaders. We’re three New York City transplants that met up playing in other bands around NYC.  I started Habits with a drummer friend of mine who knew Mark and brought him to practice one day.  I’d met Mark on several occasions but managed to drink the memories away.  He and I worked well writing together so we hit it off fast.  We ended up needing a new drummer so we asked Rob (who at that time was in The Vansaders with me) to fill in.  After a few shows he refused to leave the band, so we let him stick around. Even though his nipples are enormous!

We ended up needing a new drummer so we asked Rob (who at that time was in The Vansaders with me) to fill in.  After a few shows he refused to leave the band, so we let him stick around. Even though his nipples are enormous!

In the review I mentioned influences of Hot water music and Make do and mend. Now’s the time for you to debunk that comparison or perhaps leave us flabbergasted with your sources of inspiration. So go ahead, what inspires you to make this type of music?

You know, all three of us listen to pretty the same kind of music but different aspects of it.  Rob is more into rock & roll like QOTSA.  Mark’s been a punk rocker since he could tie his own Chucks and I’ve always leaned toward the heavier, more melodic end of hardcore.  We don’t set out to sound like any other bands, but we grew up listening to HWM, Marked Men, Descendents, Alkaline Trio, etc. If once in a while we appear to wear our influences on our sleeve it’s only because they are ingrained in our DNA!

I liked your EP, although I feel it’s a bit too sweet. You responded to that immediately on twitter saying this would be fixed on the next record. What can we expect on your next release?

Thanks, we’re glad you liked it!  “Fixed” is a funny word.  I guess you’d have think the EP was broken – which we don’t.  Our intention with Train Wrecks was for the guitars have tone not just distortion.  I’m a pretty big gear nerd so tone is super important to me.  I don’t use a lot of distortion when we play live and we wanted to carry that feeling through to the record.  We recorded everything ourselves with our friend Scott Wolff at The Rock Compound and we’re pretty happy with the results.  That said, we almost immediately made plans for another recording which we started at Little Eden with Pete from the Bouncing Souls not too long ago.  We’re going to take our time and get it just right but the intention is for these new songs to be heavier, louder and bigger. 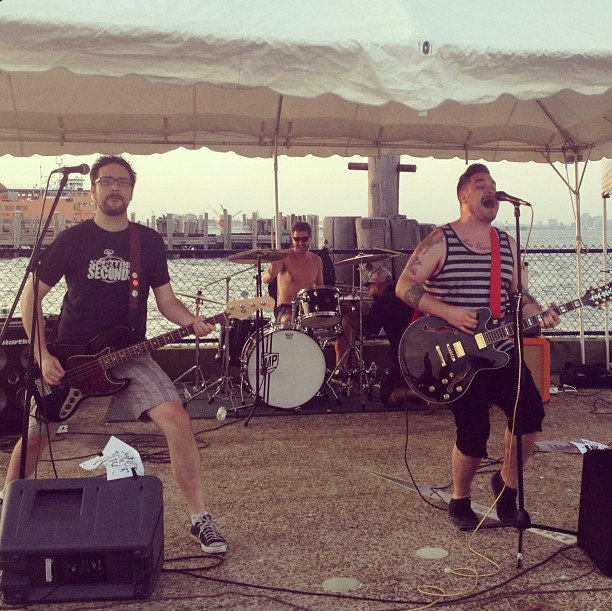 We hope to try our hand at dramatic acting in our next video, because I couldn’t think of anything more embarrassing or any better way to show off our terrible personalities!

In that same tweet you mentioned you were crowdsourcing the production for your upcoming release. How’s that coming along (and where can we find it, if still relevant)?

Haha, when we said that we were poking fun at your criticism; saying that we were going to let the public produce the next recording so everyone is happy!  We’ve talked about crowdsourcing to get the money to make the next record but that sort of thing always feels like begging.  I guess we wouldn’t be opposed to setting up some sort of Kickstarted Pre-Order or something but we’re all employed and don’t mind spending money on something we love so much.

Haha, didn’t see that one coming… Do you hope for a deal with a label or are you planning on doing everything by the DIY-lines?

We really only concern ourselves with writing and recording music that we are proud of.

You’ve played an acoustic set live. How did that turn out? Is it something we will hear more often from Habits?

As a band probably not but I play One Mighty Ugly Backpack acoustic shows every few months to work on new material.

On with a couple of silly questions: If you were to go to an abandoned island, which five albums would you bring along?

Which music-video made a huge impression on you?

Any plans of making your own video?

We have a couple little videos online from the Train Wrecks EP. We hope to try our hand at dramatic acting in our next video, because I couldn’t think of anything more embarrassing or any better way to show off our terrible personalities!

Thanks for the interview, any last words?

Just thanks for reviewing the record and hitting us with this interview.  We appreciate what you and the rest of the writers over at SWNK are doing by supporting bands like us!