Jessica93: who cares about this world? Dance as zombies all night long

Snow and traffic jams just before Amsterdam made your interviewer rush to the Melkweg to attend Jessica93’s show at Grauzone. Arriving ten minutes late, an already warmed up Geoffroy Laporte shows how to create a dark danceable atmosphere with the songs from his latest record ‘Rise’. The cold drum computer beats are his vehicle for changing between bass and guitar rhythms and eventually also to sing. I met him at the merch just after the show.

“It’s better to do the interview now; I am not too drunk yet”.

Talking to the musician from Paris is like hanging out on the filthy streets of Paris. Drinking a beer and still high on adrenaline from his one-man show in the theatre of Melkweg it’s hard to get Laporte focused at the interview. Surrounded by his friends that traveled with him to party in Amsterdam. Do it yourself in full effect: pack your stuff in the car, travel abroad with friends, play a show on an awesome festival, hang out and have a good time together. Louise is joining the interview and his other friend is filming parts of the interview.

“Every time I play it’s getting better and better. This is my first time playing in Amsterdam and it was great to see that, even though it was still early, people were already dancing like an army of zombies. With such a great lineup I am happy I am here. When my booking agency first told me the Grauzone festival asked me to play I couldn’t believe it. I felt like a kid in a candy store. Such great artists like Neu!, The Fall or D.A.F. are playing this year.” 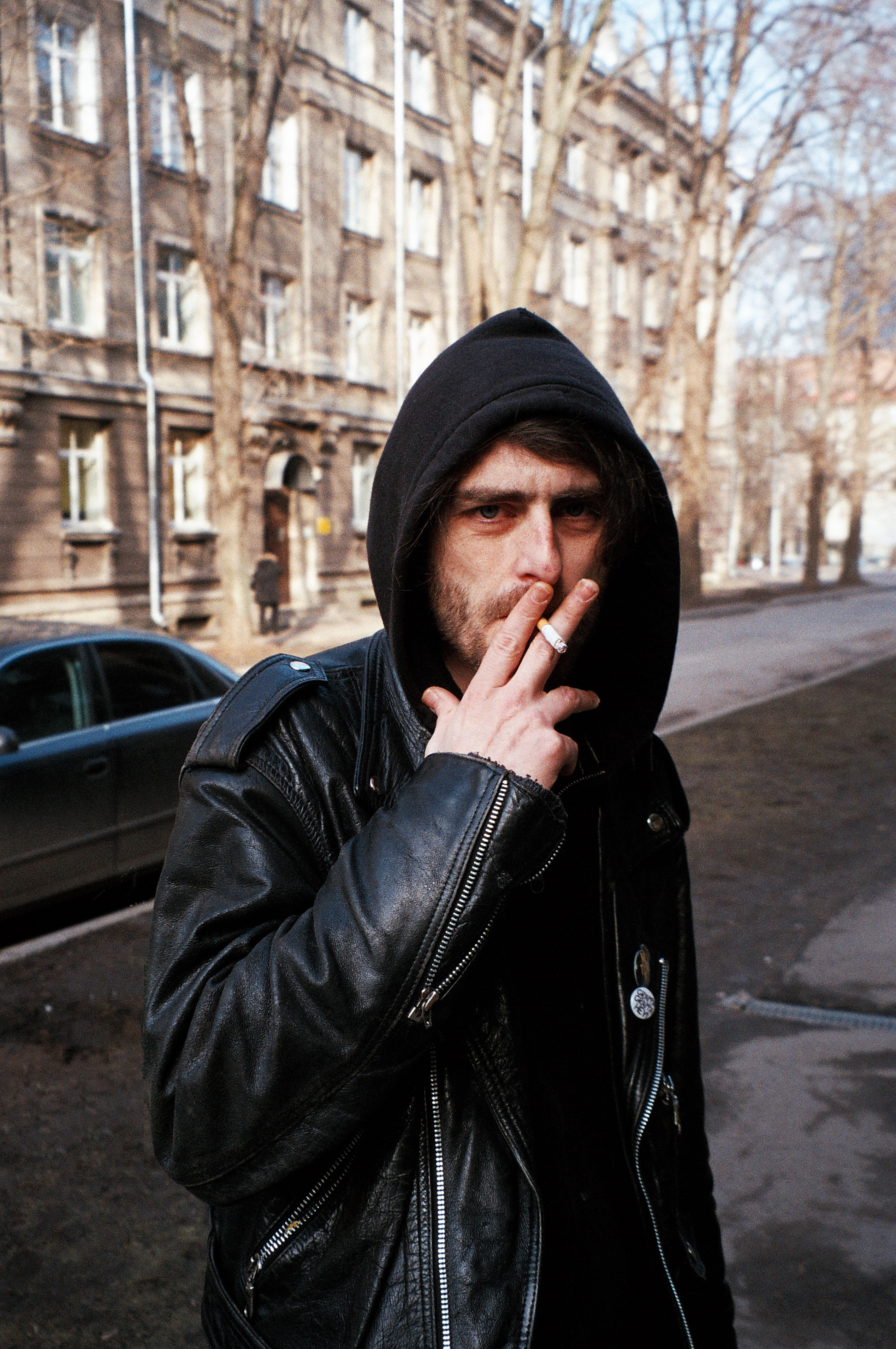 When my booking agency first told me the Grauzone festival asked me to play I couldn’t believe it. I felt like a kid in a candy store.

“I play very often in Brussels and the more I play there, the more BPM I put in the music to get people dancing. I am really happy how things are moving forward”.

Most tracks played tonight were from your latest album ‘Rise’. How do you compare it to your earlier work?

“First of all, most of the songs were already written a longer time ago. When the first recordings were released (present also as a bonus on the ‘Who Cares’ album) ‘Who Cares’ was already written. When ‘Who Cares’ was released I already had written the new stuff. That’s the reason I stopped writing new songs because ‘Rise’ still had to come out. The old stuff is more complex, louder and it turned out this way by coincidence.
The songs on ‘Rise’ carry more melody and especially live they work out better because they are catchier and danceable. It has become easier to write songs over time because I know what I want. I know from experience how to shape it until I am satisfied”.

How did you come up with the name Jessica93?

“Jessica was supposed to be my name if I was born as a girl. ‘93’ is the Paris district where I am born and it’s also the area where all the hiphop gangsters are hanging out so the idea to have a band with a girl name connected to the ghetto area was made pretty easily. It’s silly and a joke though, haha”

Speaking about a Paris underground scene I ask him if he is familiar with Kickback and if they are still around?

“Of course I am aware of Kickback but they are not around anymore. With respect to the underground music scene of Paris, you can hang around for more than 10 years and don’t know show promotors who do shows for 10 years. Paris is a big city so not every scene is connected. I was quite lucky; I grew up in the Punk scene; hang out in the garage scene. I have played in Hardcore, Punk, Folk and all kinds of small bands but I still am around with the same group of people”.

I recently made a review of Cowards’ new record; a band from Paris mixing Kickback with Sludge and Black Metal. It really has the hate factor and the record gives you the feeling to step out your office and kick someone in the face. It doesn’t ring a bell in Laporte’s ears. Surprisingly Louise steps in enthusiastically…

“My boyfriend is playing in Cowards, I text him directly that you made a review of the new record. He will love the fact you mentioned Kickback as a reference because they are a big influence on them”.

Later we talk about Dutch painters as she would like to visit the Rijksmuseum and she comes up with the painter Hieronymous Bosch. I recommend her and Laporte, if they ever have the chance, to visit Den Bosch and take a look at the Jeroen Bosch Art center. 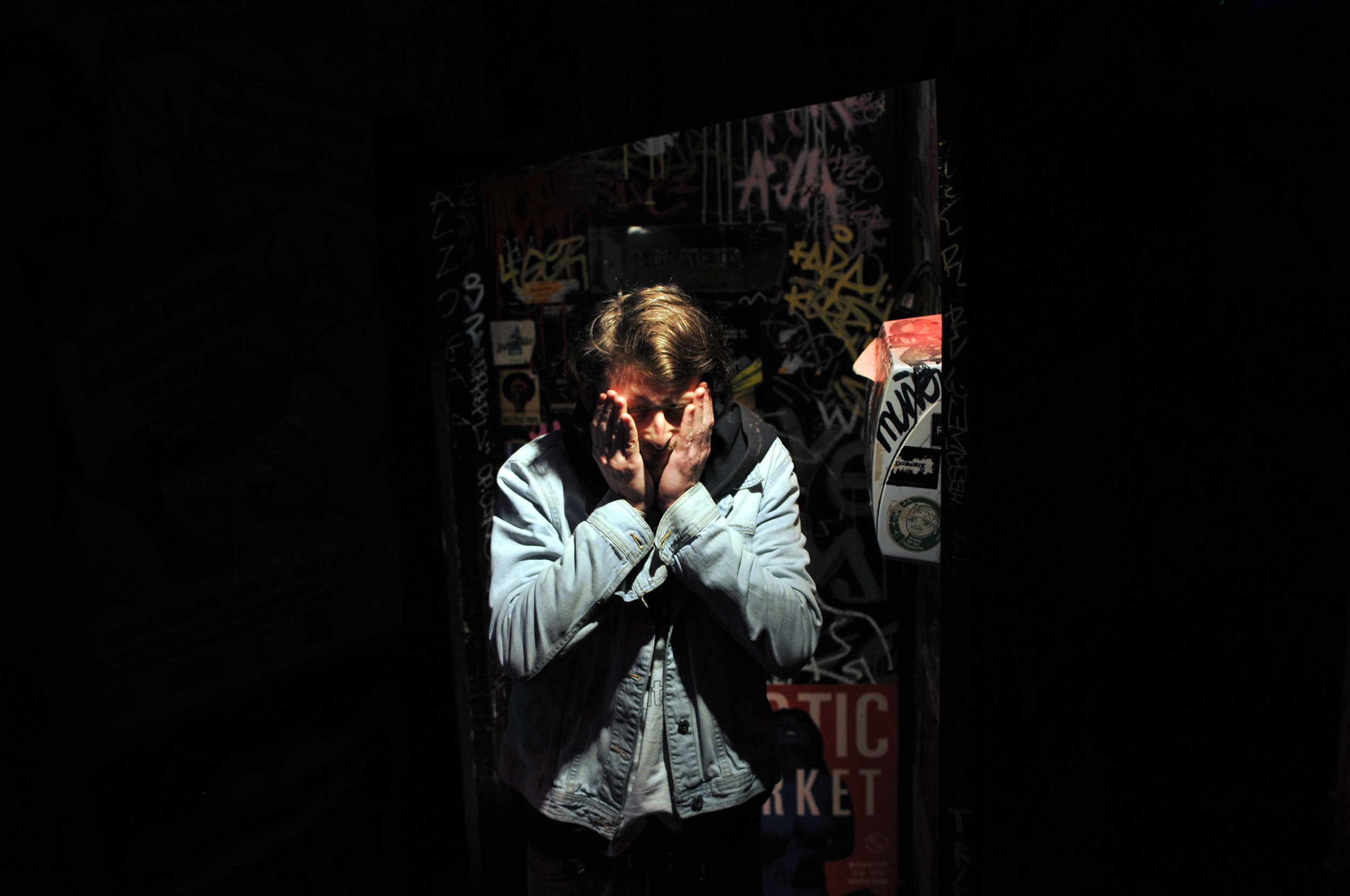 I always hate artists who claim they need to write this kind of stuff to get rid of the pain from their awful youth.

Back to the interview. In my review of your latest record “Rise” I described you as a musician who put his heart and soul in the music and it seems you need this output to overcome several things from growing up as a teenager?

“Difficult to say, I always hate artists who claim they need to write this kind of stuff to get rid of the pain from their awful youth or complain about life and feel the need to show this in their music, on stage and in the artwork. Who knows that I have to get over things from my youth? I learned playing guitar as a teenager and started creating music a long time ago. I really hated school when I was young. I am happy I can earn a little bit of money now and be my own boss. I don’t stick to genres, I recently joined a power fastcore band for example so that is the complete opposite of what I did tonight. Before I played guitar in a No Means No style band and I have another project called Missed Fists that is something really weird”.

Can you describe what you felt during the Charly Hebdo terrorist attacks this month in Paris?

“I was in bed with a fever when a friend called me what happened. I was dying I bed. I checked in on Facebook, saw the news and thought bleggh and went to bed again so I didn’t really follow it. To be honest, it’s been a mess in France for 10 years already, so for me this was not a big surprise. The attitude of people towards other groups is in decline for a long time already. The government is now speaking about freedom of speech but before more and more things got censored”.

What do you mean with a mess? France is starting to become a right-wing country just like the Netherlands?

“No it’s not only the right-wing politics. Both left and right-wing is the same piece of shit. Freedom is taken away and when I think about what politicians have to say it’s all the same bullshit and lies. It really puts me in a Cowards attitude haha.”

Besides playing music what do you enjoy in life?

“I like hanging out with friends, making food and watching movies, or staying in bed when I have a hangover, because I like to party all the time. I also love to travel around with friends, going to a city like Amsterdam and smoking weed, get fucked up haha.”

When you create music are you on drugs or sober?

“I tried everything. I created songs when I was high on cocaine and when I was sober. When I am drunk nothing happens because I am too tired and lazy. I used to smoke a lot of pot back in the days but stopped. It really clears your mind and I got inspired again to create music.”

You cannot ignore Post-Punk, New Wave, Cold Wave and Shoegaze is the next big thing in the underground. It seems you stepped in at the right moment…

“Pfff… what should I say? When I started writing songs in 2012, I was in no way busy with attracting any crowd. I created songs for myself and released them. After that my album gained some popularity and here I am still playing the same stuff and keeping everything DIY. I don’t care if this musical style is popular or not. I just do what I like to do.”

SWNK has some huge Nirvana fanatics in the team so I have to ask the question about the story behind the cover song “Something In the Way” from the tribute album ‘Nevemind’ from the label Et Mon Cul C’est Du Tofu? (Translation: Is my ass a tofu?).

“Back in the days when Grunge was really big I was so much into them. What about you, what do you think about Nirvana?”

To be honest back in the days I liked the hit singles “Smells Like Teen Spirit” and “Come As You Are” but I never really got into them. I directly jumped on Metallica, Machine Head and Sepultura…

“Well I really loved Nirvana so when the idea for the cover album was made (the label of Et Mon Cul C’est Du Tofu? are friends of Laporte). I loved Nirvana when they were still really loud, mostly during their Incesticide period. I love their melodies too. Picking a song from ‘Nevermind’ I have chosen a less known song from Nevermind which became “Something in the Way”.

The complete cover album can be listened here.

Laporte is ending the interview with a fun fact, of course it has to do with rock n’ roll and drugs…