Make Do And Mend

With ‘End Measured Mile’ finally getting a solid release in Europe through Shield Recordings and a European tour with Hot Water Music coming up, it’s time for Make Do And Mend’s drummer Matt Carroll to explain about The Wave, walking dogs and Carry On’s ‘A Life Less Plagued’.

First of all touring with Hot Water Music in Europe, is that like a dream come true? How did this package come about, did the guys from HWM asked you or were you contacted by a tourbooker? 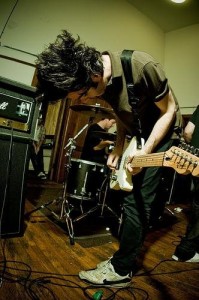 Yes, touring with HWM is a complete dream come true for all of us. Still right now, thinking about this happening I almost laugh to myself and say, “yeah right dude.” The guys from HWM asked us to come along, which is also completely mind blowing. We are all at the point that we don’t really have any “heroes” or look up to many, but we have always held the utmost respect for the band Hot Water Music. Both in the incredible music that they make, as well as the way they carry themselves as people and a band. So it is safe to say that we couldn’t be anymore excited to be able to share the stage with them for a month.

Which bands and records did get you into hardcore/punk. What was the first show you visited and when did you start thinking about doing your own band?

It’s different for all of us. I grew up in the Blink 182 age. That band is what got me into punk rock. When I was a young kid, and only being exposed to what was on MTV etc… Blink hit the mainstream and I fell completely in love. From there I got into bands like Rancid, H20, Alk 3, NFG. That whole rush of punk that was getting big. And then from there I was handed a record called A Life Less Plagued” by Carry On from my good friend at the time Devin. This record changed the game for me, and still to this day is probably my favorite hardcore record ever. I became fascinated with the culture and history, so I researched back and got into bands like Gorilla Biscuits, Judge, Youth of Today etc… This is the kind of stuff that formed me, and made me want to play music.

My first show every was Newfound Glory, Something Corporate, Finch and Further Seems Forever at a venue in my hometown. I skipped out on going to see Backstreet Boys with my family a few weeks prior because I was too punk. I regret that decision to this day.

I skipped out on going to see Backstreet Boys with my family a few weeks prior because I was too punk. I regret that decision to this day. 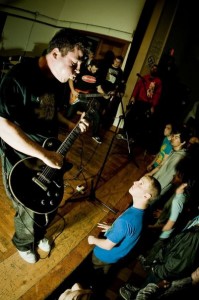 ‘End Measured Mile’ is going to be released on Shield Recordings in Europe. How important is it for a band like yours that your record is better available outside of the States?

Yes it is, we are excited about that. More and more we are realizing how important it is. Especially for a band like us who is on a tiny independent label, that doesn’t really have too far of a reach outside of the US. To have your record exposed overseas and in different places is important, because much like here in the states, you need people to know who you are and to be able to buy your record in order to tour. We want people to have our music, that’s why we tour, and that’s why we do things like this!

You share one bandmember with Defeater. Since both bands are pretty up and coming right now, doesn’t this give conflicts with touring schedules etc? Do you think there comes a time when one has to choose between Defeater and Make Do And Mend?

It has in the past, but moving forward I don’t think it will be an issue. We will never have a fill in bassist again, just because we work as a unit. Things can always be worked out though. Defeater dudes are some of our best friends in the world, and we believe in their band a ton, and want to see them succeed. We are all on the same team here.

I guess you all have jobs besides the band. What is the worst job you’ve had so far?

O yeah. Well when we recently got back from a US tour, we had like 3 weeks off. I desperately needed money, so I got a job walking dogs. In theory, this job sounds awesome, I know. But NO. I was picking up 10 dogs at a time in our bands van, taking them to parks and letting them run free for an hour. They would jump in the largest mud puddles, run away from me, even some would run into traffic. It was completely miserable and I quit as soon as I could. That is definitely near the top of the bad job list for me.

So I got a job walking dogs. In theory, this job sounds awesome, I know. But NO.

If there were five non-hardcorepunk and five hardcorepunk records you could save from the Apocalypse which records would that be and why? 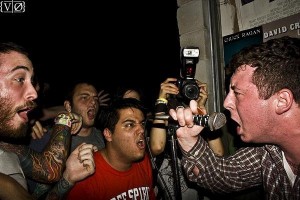 Tough question for sure. Here we go:

Jimmy Eat World- Futures
Oasis- (Whats the story) Morning Glory
Carry On- A Life Less Plagued
The Movielife- 40 hr Train Back To Penn
Sting + The Police- Fuck it, I cant choose so I’ll just say their discography or best of.

Are you already working on new material, are there any plans for a new record so far?

Make Do And Mend is part of The Wave, just as bands like Touche Amore and Defeater. Can you explain what The Wave is, where it originated from and what other bands have to do to join it?

It originated from a conversation me, James our singer, and Jeremy from Touche Amore had in their van outside of my apartment in Boston. Basically we were just talking about our friends and how awesome they are, and jokingly we said we should give it a name, a little group! And from there it developed into something crazy,. IF people feel it as a movement, then we are down with it. We have the best friends in the world, that reaches far outside of The Wave. But for now and probably forever the wave will just be us 5 bands (Touche Amore, Make Do And Mend, Pianos Become The Teeth, LA Dispute), because those were the ones we came up with in the silly conversation in the van.

So the European Tour is coming up. What do you expect/hope from it?

I expect to play with one of my favorite bands of all time every night for a month. And I hope that we will get to see some amazing places and play to and meet some incredible people.