In the upcoming weeks we’re going to turn the tables now and then and do short interviews with the people that bring you SWNK, to give you an idea who we are and where we come from. First up is Callum (Canonized) from the UK.

Waddup man, I’m Callum and I’m trying to expand my dangerously narrow minded music taste with the help, or persuasion even, of SWNK. I occasionally spin the shit with band members too, so it’s a first for me being on this side of the table, haha. 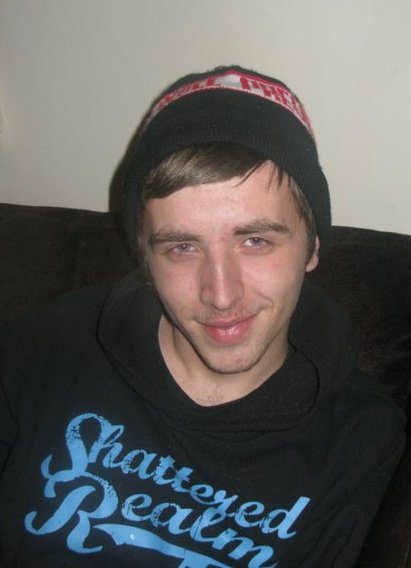 Haha, be afraid. Be very afraid! When you don’t pretend to do anything for SWNK, what’s taking up your time?

Alas, working takes up far too much of my time. I’m a logistics operator, managing cargo worldwide for a freight company for 5 days a week, and then I try to squeeze my past times into what’s left. I’ve been booking shows in the north of the UK for almost 6 years now with the help of my closest friends and I’ve been able to put on some of my favourite bands in that time, which I guess is pretty cool. Mechanical projects take up the majority of the rest of my time, particularly old school German vehicles, and I’m slowly restoring an early 90’s BMW to its former glory, which as you can imagine isn’t cheap. As well as this, I’ve been trying for about a year now to get a band off the ground playing late 90’s influenced metallic hardcore with a group of my friends, but we’re all so busy that it’s proving difficult!

I’ve just spent a good 5 or 10 minutes thinking how to answer this question, haha. A lot of things inspire me. Life itself is probably a good one. I’m not talking about some creationist agenda, but the richness and diversity of life around us on the earth is a good source of inspiration. Human beings are just one facet of this gigantic eco-system made up of billions of different species, that even more improbably exists within the vast inhospitable universe, randomly. It can be humbling to think about, but I find it inspiring. It makes me want to be proactive, and try to leave some sort of lasting mark at least on human history.

The hardcore scene is another. Being part of this semi secret subculture that’s totally unintelligible to your average person in the street is quite satisfying I think. Over the last 3 or 4 decades hardcore has grown into this rich tapestry of different ideas and styles of music, that remains below the surface of mainstream popular culture. I like the fact that it takes a bit of interest and knowledge to be into real hardcore, it isn’t something that corporations can package and sell to the general public (as much as they might try). Sites like teetilldeath and hardcoreshowflyers are really cool, as they allow people to look back into the annals of hardcore past, and this idea of doing things so that the generations after us can pick up where we left off is really inspiring to me.

A couple of things influenced me I suppose. My parents ride motorcycles and endorse the whole biker culture, so I was exposed to an inordinate amount of bad classic rock and metal as a child. This culminated in my mother taking me to see Motorhead when I was about 12 years old, but the site of the barely conscious geriatric wreck that is Lemmy on stage these days ignited my teenage rebellious streak prematurely, and I spent the next couple of years listening to bad dance music. Then when I was maybe 14 or 15, I had an epiphany. I turned on the radio in the early hours of the morning because I couldn’t sleep and found that it was the Mike Davis punk show on the air, and the band Alexisonfire was playing a song called .44 caliber love letter live. This was a revelation for me; here was metal music that wasn’t played by ageing dudes in leather waistcoats. From there I got into actual hardcore bands like Hatebreed, and a lot of crappy metalcore bands like Bring Me The Horizon, and 6 years later I’m still here!

So your your parents and / or family understand your love for this music? That’s cool.

Yes, like I said, my parents are bikers, so they have a certain amount of understanding for loud and anti-social music. I still can’t escape those awkward conversations with extended family members and work colleagues however, when someone asks what kind of music you listen to. I’ve begun amusing myself in these scenarios by simply lying until the person questioning me figures it out. I managed to convince a guy I work with that the Holy Terror movement, and the hardcore scene as a whole, had harbored Charles Manson as a fugitive in the states for several years prior to his arrest, and that was why his face was printed on my Integrity shirt. Maybe I should stop…

Haha, you think? So what made you start to write about music?

I first picked up writing as a way to relax I think. I find the writing process to be very cathartic when I’m in the right mood. Sometimes my work is stressful, so it’s good to come home, have a meal and a cigarette and then try and let my feelings flow out onto the page.

I managed to convince a guy I work with that the Holy Terror movement, and the hardcore scene as a whole, had harbored Charles Manson as a fugitive in the states for several years prior to his arrest, and that was why his face was printed on my Integrity shirt.

As much as I’d love to say I stumbled into a Sick Of It All show by accident and never looked back or something like that, the first band that ever really spoke to me was a Scottish metalcore band called Azriel. Back when I first started going to shows they did a tour with Bring Me The Horizon and Architects and their Posion The Well/Shai Hulud style melodic metalcore was completely different to anything I’d heard at the time. They used to do a Nerdy cover too which was sweet. I must have seen them about 50 times and become friends with all the dudes in the band over the last few years. They had a total line up change a couple of years ago though and I don’t really dig any of the new material since then though, which kinda sucks.

Recently I’ve been jamming a few different records. I’m working on a review of the new Fire & Ice record, so I’ve been spinning that a lot. Not too sure about it yet. I’ve also been listening to Diamond – Don’t Lose Your Cool, Buried Alive – Last Rites, and special mention to Black Breath – Sentenced To Life (my house mate has been telling me to listen to it since it came out and I only picked it up properly today), that record brings the riffs.

Outside our little subculture, I’ve been listening to a lot of 90’s US hip hop, and artists influenced by it. Today’s particular record of choice is by a UK hip hop collective called Four Owls and is called Nature’s Greatest Mystery.

My main objective for this year was to get more tattoos, so I guess I’m midway through accomplishing that. Aside from that, I’d like to move to a new job within a similar area, one that allows me some more disposable income. I’d use the disposable income to book the hardest ‘fest’ seen in recent years. Shattered Realm, Stout, Nasty and Merauder would play, among others.

I feel I’ve said too much already!

Easily Posi Mike’s review of the most recent Your Demise album. It was really cool with that I managed to achieve with my ‘rallying cry’, but that review was something else. The way he carried the metaphor the entire article turned it into a fantastic piece, when I suspect anybody else’s review of that record might have been incredibly dull. Top marks.