Some interviews are done before you know it, others take some more time. Like this one. But here it is, the interview with Michael McGrane. Never heard of him? Go grab that Supertouch 7″ out of your collection and have a look at the cover image. He’s the man who did that. And as a bonus you’ll get some unseen Supertouch photos he took at a 1988 CBGB’s show. Worth the wait right?

Hey Michael, what are you up to at the moment? Any interesting projects going on? 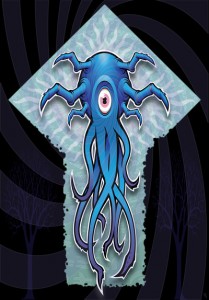 Hello Pim. Thanks for contacting me, I appreciate your interest. I’m currently working on an art project called Beware Of Yajuu, which consists of a series of illustrations I’ve done which I’m marketing on shirts, skateboards and other merchandise. I’m also painting on canvas and furniture and planning to get back into the gallery scene with some of those. I just had one of my pieces called “The Watcher” in a show called “NOLA Now” at the New Orleans Contemporary Art Center, which was a big deal for me. I’m also doing a lot of design work through my graphics studio, 2821 Art & Design.

Interesting. I love those prints on skateboards. I was wondering though, where does the 2821 stand for?

Thanks, glad you like the skateboards. I was trying to come up with a good name for a graphics studio but a quick Google search will show that just about any name you can think of has already been used by someone, somewhere. I thought if I used a number it would be less likely to have already been taken. So, I used the address number of the huge, old, haunted mansion that my wife and I live in here in New Orleans.

A huge, old, haunted mansion? Ok, I need to hear more about that?

We’re lucky enough to live in a beautiful, spooky old mansion surrounded by ancient oak trees. New Orleans is great about preserving it’s older homes and buildings and there’s a lot of history here, it’s a very unique American city. There are also many stories about ghosts and voodoo. We just joke around about the house being haunted, but we have heard footsteps and doors closing and our dogs are always reacting to invisible things. Halloween is great here.

We just joke around about the house being haunted, but we have heard footsteps and doors closing and our dogs are always reacting to invisible things. Halloween is great here.

Let’s go back in time. You did the artwork for the Supertouch – What Did We Learn 7″. What inspired you to come up with that image?

I guess I was trying to come up with something having to do with the sense of touch, that being an obvious reference to the name of the band. It seems I was suffering from a lack of imagination at the time.

It might be a lack of imagination but I always loved it. How do you look back upon that image now?

Well, I think any artist who looks back on their art from 20 years ago is going to tell you it’s not their finest work. I was somewhat young and still in art school and very much in a learning phase so I would probably execute it quite differently today. Also, the artwork was printed as a negative by the printer. So, the areas where you see white on the 7″ were originally drawn in black and vice versa, so the cover is actually the reverse of the drawing. People who are old enough to have experience with film cameras might recall what the negatives looked like. This made the image look strange and reversed, because of that I didn’t feel it was faithfully reproduced. I don’t mean to sound like an ungrateful, giant baby. I’m deeply honored to have been involved with the project.

The artwork was printed as a negative by the printer… This made the image look strange and reversed, because of that I didn’t feel it was faithfully reproduced…

Yeah I know it’s a negative. That’s also a function in modern age Photoshop haha. For whatever reason I always thought it was meant like that, to make it appear a bit mystic or something. Interesting! Were you involved with the rest of the artwork too? Or did you only do the drawing and saw the final result when it was done?

I did the logo that was used on the cover and I might have done some lettering inside. I honestly can’t remember and all my vinyl is in storage right now so I can’t check…

Did you do any other artwork for them, or for other bands in that period of time?

I designed some of the early Supertouch t-shirts as well. I think they’ve been re-using some of those designs again recently. I didn’t really work with any other well-known bands from that time period, but I did a lot of logos and art for several bands that never went anywhere. I also did do some art for Billy Milano from The Psychos and Storm Troopers Of Death, I think it was for an M.O.D album, but he ended up not using it for some reason. In the 90’s I did some more 7” covers for a few other bands like Murder One (from New Jersey) and Ruido (from California).

How did you get involved with the guys anyway? 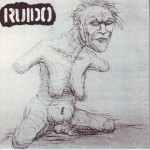 I grew up in the same town as Mark Ryan and Jon Biviano, just outside of Manhattan. We knew each other from school and we bonded over a shared interest in music and art and we hung out a lot. Mark introduced me to a lot of cool music and he got Jon and I heavily into punk and hardcore. We went to CBGB’s every Sunday to see the hardcore matinees in the early and mid 80’s, which, as you know was a great time for that scene. Bands like Agnostic Front, Cro Mags, and Bad Brains were in their prime. Mark also knew all these bands personally because he was in DBD, so it was cool to get to meet some of them. And of course I never missed a Death Before Dishonor or Supertouch show. At around that same time, I was doing vocals in a garage band with Jon on guitar, doing hardcore and death metal covers. I think we were about 15 or 16 years old. We actually had a pretty great set-list, everything from Agnostic Front and Cause For Alarm to Slayer and Hellhammer.

The energy at a Cro-Mags show was rivaled only by a live Bad Brains performance. No one could touch Bad Brains for sheer energy on stage. I’ve seen them well over 30 times. I always say Bad Brains were the greatest live band ever.

Yeah I wish I saw those bands back then, damn. Mark said you guys even saw the Cro Mags before Age Of Quarrel dropped, must have been insane, seeing them explode and everything?

It was always crazy when they played. It was just pure energy and adrenalin with people flying all over the place. I’ve seen them live about 25 times now, mostly in the 80’s. It’s a shame what happened to the band because it would be great to see the original line-up live again. They’re certainly not likely to reunite now, after recent unfortunate events. The energy at a Cro-Mags show was rivaled only by a live Bad Brains performance. No one could touch Bad Brains for sheer energy on stage. I’ve seen them well over 30 times. I always say Bad Brains were the greatest live band ever. I feel very fortunate to have seen these bands during their prime and I wouldn’t trade it for anything.

You also mentioned doing a band of your own. What was the name of the band and did you have any own songs too?

We called it Animosity. I don’t think we played any real shows. We played at our high school a few times and lots of parties but no clubs or anything like that. We never wrote any originals although I can’t recall why. We did covers of a lot of the bands we were into like Agnostic Front, Cause For Alarm, Cro Mags, Corrosion of Conformity, Venom, Sodom, and Celtic Frost.

You also mentioned (before these questions) that you did backing vocals on the early Supertouch recordings. Any good stories to share?

It was pretty business-like in the studio, no tales of madness or debauchery really. Although there were plenty of those from other occasions. Overall, it was a very cool experience and it was great to be a part of that moment in hardcore history.

We would make huge fires and take a lot of LSD… That’s probably pretty tame by today’s standards. We didn’t have meth labs back then.

Well, we had huge parties almost every night back then and a lot of our adventures were fueled by various mind-altering substances. We liked to go on camping trips in upstate New York on these islands in the middle of a lake with lots of people. We would make huge fires and take a lot of LSD… That’s probably pretty tame by today’s standards. We didn’t have meth labs back then.

I asked you what inspired you to do the Supertouch artwork, but what inspires you these days, for your current work?

I think what’s happening now with my Beware Of Yajuu art is that all the different stuff I’ve been absorbing my entire life is coming out artistically. I’ve been heavily influenced by a lifetime of comic books, monster movies and cartoons, particularly in their Japanese incarnations. I also read a lot of HP Lovecraft.

I think what’s happening now with my Beware Of Yajuu art is that all the different stuff I’ve been absorbing my entire life is coming out artistically.

So to close this off, if there’s any artwork out there, a painting or a record cover or whatever that you could pick and call your own. What would it be, and more importantly.. Why?

That’s a tough question. As far as music related art, I really like what Mastodon has done with their album covers over the years. Paul Romano did an amazing job and the newer stuff by AJ Fosik is great too…

That’s it. Anything else to add?

If anyone would like to check out my current work, my paintings can be seen at www.michaelmcgrane.com, and my Yajuu art is at www.bewareofyajuu.com. Thanks again Pim!