This Saturday the curtains will close for one of Belgium’s finest hardcore bands: Midnight Souls. Frontman Donny explains why the band is calling it quits and looks back on what was Midnight Souls.

You’re just back from a weekend in Germany and also recently did a couple of shows in the UK. Do you think because you all know it would be the last time performing in these place you gave more and the feeling was different in comparison with regular shows you’ve done throughout the bands existence?

Whenever we set out to play a show in the past we felt like we had something to prove. We were there to show that we deserved to be there. We were always busy trying to create a forward momentum that would push the band to greater heights. Because we knew things were coming to an end soon, we didn’t feel the need to put so much pressure on things. Instead we focused on having as much fun as we could and really enjoy the time we’d spend together as a band, as friends, as artists. It was quite a new experience for us and it kind of felt like a relief too. Like we were able to breathe easier. Of course in the back of our heads there was that undeniable sensation that this would be the last times we’d be doing this and then things you’ve taken for granted for all those years get an added weight to it, making it a bit more special. Silly things like eating together at some truck stop or sleeping on a dirty floor with your closest friends. I guess there is romance in every tragedy.

Most of us were able to exorcise the demons we had collected over the years with this band and we’ve matured and have become quite happy with our lives.

During the writing process of Going Through The Motions there were tensions in the band as well I believe. What made you suck it up and continue working together back then and why did you all choose to follow a different path now?

During the writing process of GTTM things got heated quite often but we knew this would be part of the job if we wanted to create something special. When the recordings were done, we could look back on that period and see that it was all worth it. There were never any hard feelings towards anybody in the band and to this day we remain the best of friends. The tensions weren’t about ego or personal rivalries. It was just about making the best record we could and in order to do that, we needed to push each other further and further and of course that can take its toll at moments. And then it was just time to take these songs on the road and show everybody what we worked on so hard. After a while it became clear that we couldn’t keep investing the same amount of time and energy into the band as we did before. Life slowly got in the way and things came to a point where we had to make a choice about the future of our band. Most of us realized that perhaps MS wasn’t number one on the priority list anymore and the need to keep doing this wasn’t there anymore. Most of us were able to exorcise the demons we had collected over the years with this band and we’ve matured and have become quite happy with our lives. We also felt that we’ve taken this as far as we could. In order to become bigger we’d had to make sacrifices that we weren’t willing to make anymore. And because stagnation feels like moving backwards to us, we decided to collectively throw in the towel and end things on a high note. It’s better to burn out than to fade away is more than just an old cliché.

The last song you ever recorded is ‘Always’. When writing that song did you already feel this would be the last MS stuff?

Before we started writing new songs, we kind of knew that the next release (be it a 7 inch or another full length) would probably be our last effort as Midnight Souls. We never wanted to be a band that would stick around for 10 years. Most of the bands I really like, were bands that came on to the scene, shook things up for a couple of years and then just disappeared. We’ve always liked that idea and that’s something that goes back to the demo days of Midnight Souls. We started playing shows when I was 26/27 so I knew I wouldn’t still be doing this at 35. When we started working on new material I guess most of us had this black cloud hanging over our heads already warning us about the impending doom ahead but nobody was accepting that reality at the time. We finally sat down to seriously talk about our future and when everybody opened up about their feelings and future plans it became clear that the end was coming soon, a choice that came with some very mixed emotions, sadness, disappointment, acceptance, relief and even joy. There was one song that we were really proud of and would work as some kind of closure to our hasty journey, so we decided to record it an put it out as a 7inch.

If you could go back in time would you change the way you’ve done certain things with the band? Ever regret not going on tour when the opportunity arose and stuff like that?

Every story, even the most successful ones are littered with “should have knowns” and “could have beens” so I think it’s quite unhealthy and ridiculous to get caught up in those feelings. Of course it sucks to get an offer to go on tour with Touché Amoré and not being able to do that. During the previous summer we kept talking with the guys in Defeater about doing a tour together if the timing was right. When I listen to all the music that we recorded, there are always things I wish we would’ve done better, but that’s just because all of us are our own worst critics. But in the end we can look back on things with great pride. I think we’ve achieved quite a bit as a European band and most things worked out the way we had planned it in advance. Every choice made, brought us to where we are today and I guess we’re in quite a happy place, so I can’t say there really are any regrets. Perhaps when MLIW or American Nightmare decide to come back to Europe and we won’t be able to be on that bill, I might be a bit bummed. 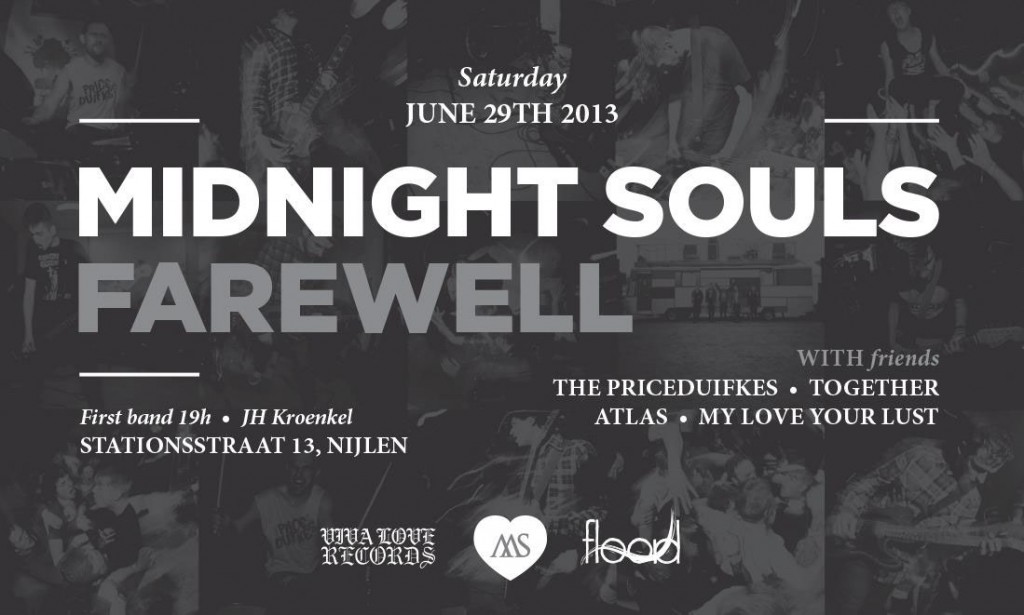 The fact that we were able to meet so many people and become a part of their lives and return welcome them in our lives is the biggest reward we get from all of this.

What are your highlights with Midnight Souls?

The fact that I was just able to do a band with people that would turn out to be my best friends is a highlight in itself. The first time I tried getting a band together was about 18 years ago. The project that would eventually become Midnight Souls started 8 years ago with me trying to find the right people to do this with, but every time things fell apart because of various reasons and I was getting quite desperate, thinking that it would never happen.

We started out thinking that no one would ever care about this band because we didn’t fit into the general idea of what a hardcore band was at the time. And now we’ve played with so many cool bands across Europe and people tell us that our band made a difference in their lives and are actually sad that we’re quitting. We’ve shared the stage with most of our musical heroes in the punk genre and to have them come up to us and say they like what we are doing is just overwhelming. I got to be on a bill with Unbroken. I bought their records and merch in the nineties, thinking they were possibly the best band ever and now Rob Moran comes up to us and buys our record and t-shirts. I’m not one to get star struck cause people are just people in the end, but I do consider that a huge compliment. Other than that, all our release shows and tours will keep the nostalgia alive forever. The fact that we were able to meet so many people and become a part of their lives and return welcome them in our lives is the biggest reward we get from all of this. I don’t know what the future will bring now we’re not a band anymore, but those people will always be welcomed as friends.

Bert started Viva Love Records but what is the rest of the band doing?

I think most of us are looking forward to a period with no serious commitments. The fact that we don’t have to worry about a next release, shirt design, summer tours… is such a big weight of our shoulders. We did all those things with great joy but it was hard work, especially in camp Midnight Souls where every choice is chewed over a hundred times before we decide to swallow it. To the last day we’re still sending e-mails discussing things to the very last detail. We all have about 5 years of catching up on postponed dates and family gatherings, to do so there will finally be time for that. Bert, Giel and Stef have been doing a little sideproject together but nothing serious is going on. Phili started working on a solo project entitled “Here is no why”. It’s a shoegazy post rock sound he’s going for so definitely check it out when things start coming together there. Over the years I’ve bought some gear to do a solo project at home. So I guess I can finally start focusing on that. It might turn into something, it might not. We’re all doing things just for the pure fun of it, without any set goals or plans. I’ve written about a chapter of a novel that I might finish someday, and I’m sure I’ll keep writing poetry cause that need doesn’t stop with the end of a band. I think we all have things little projects that we’ve had in the back of our heads for years and now we actually might have the time to work on them.

Do you see yourself returning as a vocalist in another band anytime soon?

I can’t see myself doing a hardcore band anytime soon, unless I get a golden opportunity to work with some very talented people that know exactly what they are doing and we have similar ideas about the project. But I can’t see myself spearheading a new band anytime soon. I’m ready to try out different things, but I want to do it on my own terms and at my own pace, so I guess a solo project is the right thing for me right now. But music will always be a big part of my life in one way or another and I guess the same goes for the rest of the band.

I guess there is romance in every tragedy