MyManMike suprised me with their album Will you marry me? a couple of weeks ago. I definitely enjoy my music fast and they delivered! Both the band name and the album title left me wondering about the story behind them. Time to ask them a couple of questions.

Mymanmike is a band whose members are from all around the world. Who are you and how did you meet up?
Mymanmike is Sunwoon (bass/vocals, born and raised in Seoul, Korea), Mat (guitar/vocals, from the USA, has been living in Korea for the past 6 years) and JP (drums, from France, came to Korea about 2 years ago).

Mat: Sunwoon and I met early on when I first came to Korea, through mutual friends and going to shows, and soon became friends. When JP moved to Seoul a couple years ago, he was introduced to us through a friend that he met when he toured in Korea with another band from France. After just a couple weeks of all hanging out together, we decided to try to play some music together. 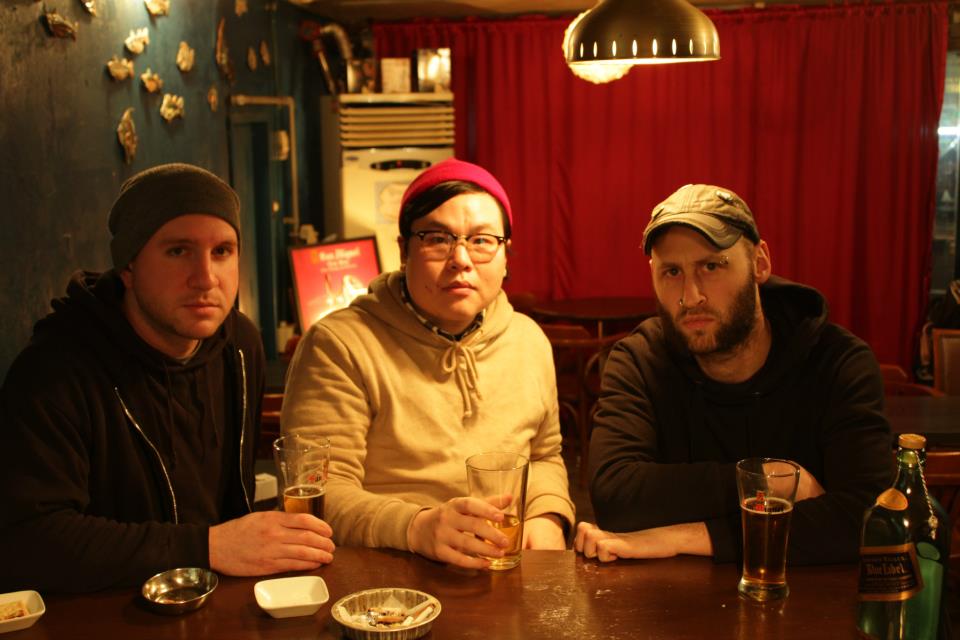 However, when she decided to stop talking to all of us, even to this day, as a result of even the possibility of that name, we knew we had to keep it.

What’s up with the band-name? Where does that come from?
It actually started out as just a joke. The girl who introduced us all together (who of course, we have far too much tact to name by name) and was even going to be the vocalist at some point, had (?) or has (?) a boyfriend named Mike that we never met. Whenever she referred to him, it was always “my man Mike” which we thought sounded funny….especially when said fast. So, when we were kicking around ideas for a name we came up with that as just a possibility, but never really thought it would stick. However, when she decided to stop talking to all of us, even to this day, as a result of even the possibility of that name, we knew we had to keep it.

Great story! It is… let’s call it a bit different and therefor easy to remember. But… while we’re at it: who did you guys propose to?
Many people, but they always refused…

Poor you… Let’s talk music now: how does MyManMike write a song? Is this a group thing or do you write stuff individually?
A bit of both. Usually, one of us shows up to practice with a rough idea for a song or at least some riffs. From there, we work it into a song together, including some ideas of possible lines. Lyrics come last by the three of us all picking different songs that we have ideas for to write on.

Based on the intro’s and outro’s you use on the album I’d say you’ve got something to say. What are you guys singing about?
We come from three countries with shitty presidents and shitty politics in general, that’s why we used these samples between the songs. This is also where the name of the album comes from. “Will you marry me?” is about finding a better place and convincing someone to marry us for a visa.

About our lyrics it really depends, we have some songs talking about the problems we see in our countries, but also about other different topics, like mosquitoes, viagra, Star Trek…

Haha, that’s just great. It’s not healthy being too serious all the time in my opinion. Which song is your favourite on your album? And why?
JP : Proboscis, the first song of the album. Because it’s short, fast and furious, like one of the best movie in the world.
Sunwoon : South Kor Suicide, because it’s the longest track.
Mat: Le Ligre est un animal suprenant, because of how absurd me and Sunwoon sound trying to sing in French.

Well… I didn’t notice that, but my French is most probably not a very good reference point anyway. What are your main influences? Are you still listening to these influences?
When we decided to make the band, we first decided to just make some covers to see if we got along playing together, so each member choose one or two songs to copy. It finally came down to songs of Punch, Victims, Tragedy, Strong as Ten and Dropdead.

Of course we don’t only listen to this kind of music, but sure, we still listen to these bands.

Unfortunately we don’t get a lot of bands from outside of Korea touring here, so that is one thing we would like to see a lot more of.

According to your Facebook-page you are based in Seoul. There’s a constant tension between North- and South-Korea. How’s it to live there and how does that reflect in your music?
North who? Never heard about it. Is there a punk scene there? Maybe the destination of the next tour…
Honestly, the tension between the North and South is greatly overblown and overplayed in the media, and has little influence on daily life here.

About living in South Korea : party, alcohol, good food, good people and a good local punk scene with some great bands. Unfortunately we don’t get a lot of bands from outside of Korea touring here, so that is one thing we would like to see a lot more of.

You’ve done quite some touring earlier this year. How did that come along? What was the best show you’ve played so far?
JP : It was in 2012 that we had the idea of touring in Europe. I used to do it many times with my other bands before, so I already knew some people to contact. So I started contacting promoters for touring in the Summer 2013 and the reactions were pretty good about our music. When we started the tour in the beginning of June, maybe 55 shows where booked but we finally found a few more during our travel.

The tour was really good. We were fortunate to see many people at all of our shows, especially during the summer.
About our best shows, it’s hard to pick a single one, but we would say they were in Brussels, Gdansk, Münster, as well as the Play Fast or Don’t and Ffud festivals. These shows really stick out as having great energy and really enthusiastic and welcoming crowds.

What can we expect from you guys in the near future?
We plan to start recording in January for another full length. We’re not sure yet, but potentially we’ll do a couple of splits as well….one with a band from Indonesia and another with a band from the USA. We also have just started talking about our next tour for 2014, maybe in the USA or South America, or both?