About two years ago we (Said And Done) played a show in France with a cool new band called No Solution. Aside from being great dudes, they unleashed a nice set of classic youthcrew into the audience. Skip forward a long time of not hearing anything. Recently there was a sign of life though, with a demo being released. Time to catch up and see what singer Alexis N. and guitarist Alexis G. have to say about it all.

I think it was two years ago already that we played with you guys in France, your first show right? That one was great, but what the hell happened in between that you only just released the demo tape?

Alexis G. : It was two years ago indeed. The reason why it took us so long to put out a demo was because we used to have a pretty bad drummer, with a big lack of motivation. So we’ve just played 3 shows with him in a year because he wasn’t able to remember our songs… Anyway, at the fall of 2010 we got a new drummer. We’ve started to rehearse again and finally did our first show with this line up on the 5th of february 2011. The demo was recorded on the 12th and 13th of april 2011, and here we are.

Ok, let’s start out with the most generic question ever. Who’s in the band? Any previous bands?

Alexis G. : Alexis N. is on vocals. NxS is his first band but he used to do a fanzine called Gonna Make It and he books shows since a long time. Antoine, our bass player, is also vocalist in another hardcore band called Black Page influenced by Guns Up, No Warning and Cruel Hand. They’ve released a MCD a few month ago! Check them out. Regis on the drums previously played in a punk rock band called Trinitro. As far as I’m concerned, I used to be the guitarist in a band called Money Time. We were influenced by More To Pride, Dirty Money and that stuff. We broke up in 2009. I now play the guitar in No Solution! and also run Straight & Alert distro.

As for influences, I hear lots of Youth Of Today (and True Colors, who you guys covered at that first show), what else influences you guys?

And what’s the main message you want to bring across with No Solution?

Alexis G. : We just want the people to feel concerned about the scene, what surrounds us (socially speaking) and have fun no matter if you are punk, hardcore kid, straight edge, skinhead… It may sounds really cliché but that’s something we’re directly concerned about. As you’ve seen when you came over with Said And Done, skinheads are a big part of our scene as well as punx or just hardcore kids. We are just a bunch of guys here, not like it can be in other European countries, so staying “united” is essential to keep our scene alive.

What’s your favorite No Solution lyric and why?

Alexis N. : “Where Does Ethic End ?” because it sums up a bit what we’ve said in the previous question. Actions instead of complainings, being a part of the solution not the opposite.

What’s the one thing people should remember about No Solution after reading this interview?

Alexis G. : I don’t really know, that we’re not trying to reinvent the wheel but just play music we like? Honest and fun are two words I wish people could define NxS with. Oh, and they have to remember we’ve got a black singer, that’s a unusual enough to notice! haha. Apart from NxS, I’d like people to remember that, unlike what most of the people think, France has something to offer. There’s some really good bands here but it’s hard for them to play outside the country. It starts to change now, with DIG playing Germany at Break Down The Walls Fest, or A Bridge To Many and Get Lost (RIP) who already did an euro tour. But we have to try to go further.

Something else, what’s the best thing about French hardcore? And the worst?

Alexis G. : To be honest the scene here is so weird. There are some really active cities like our hometown Nantes or Bordeaux, Paris, Toulouse… But I dont think we can say that there’s a french hardcore scene. The best thing (concerning Nantes at least) is about unity. As you saw, here we all hang out together and don’t really care what you are (punx,skins,edge,hc kids,metal etc..).

The worst is that we don’t have a really constant crowd coming to shows. Of course there’s a bunch of guys who always go to shows. However you can have great bands playing with 20 guys in the room, when you’re gonna have a full room with not so good bands, or the opposite. Evey new show is a real challenge for promoters here, because you don’t know what to expect !

In addition to that, a real plague in the french hardcore scene is what we call “beauf-core”. A mix of bad metal influenced hardcore with a screamed voice and cheesy mosh parts. But I’m sure that shit spreads in all the countries!

If you could change anything in the world right now, what would it be? Try not to be cliché haha. Remember, world peace can’t be done.

Alexis N. : Gonna try not be cliché but I have to admit that it’s fucking difficult. I think I’d help people to understand each other. The main problem between humans, between us is that we do not take time to listen to each other. Wars, hate and all that diseases are causes of this lack of understanding between people.

Ok, get in control. DIY. Ask yourselves a question, and answer it.

Alexis N. : What hardcore means to me? It means a lot, a big part of my life, music but most of all good friends, good laughs. More than a simple music, a social awareness.

Alexis G. : Yeah, thank you Pim for all and say hi to all the Said & Done guys. We are available to play anywhere, so if you’re interested please feel free to get in touch at alexis@straightandalert.com. Thanks to our buddies from xDIGx, Black Spirals, Lasting Values, Black Page, Stay Hungry and This Is Your Scene. Check out my distro, Straight & Alert at www.straightandalert.com for any cool records you need ! Peace 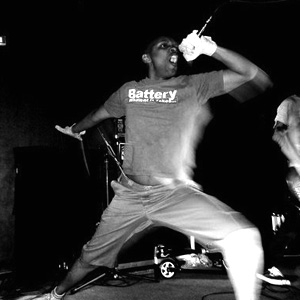