After reading the press sheet of Pale Angels ep Strange powers I was intrigued: is this a band or is it a project? How does that work, being in a band but living on different continents? Time to ask ‘m a couple of questions. Jamie was kind enough to answer them. Here’s what he has to say.

Please introduce yourselves: who’s in the band?
I’m Jamie, I play the easy guitar and sing. Michael Santostefano plays the real guitar and sings and on the next tour we have Reza Mirehsan playing drums.

All members are playing in other bands as well, is Pale Angels a band or should we consider it a project?
Yes that’s correct. Pale Angels is definitely a band.

You tour quit a lot, especially considering the fact that you all play more bands. How do you plan this?
For Mike and I, this band is our priority for the time being. We have to put a lot of work into the organizing of things, but so long as plans are made in advance, it’s no different from organizing stuff within any band. You just have to figure out your life around it.

You say this band is a priority for the moment. What does that mean for your other bands?
It’s mainly a planning thing. I don’t have plans for any other band stuff other than the Pale Angels stuff we have going on. That could change in the future but right now, the focus is on this band. 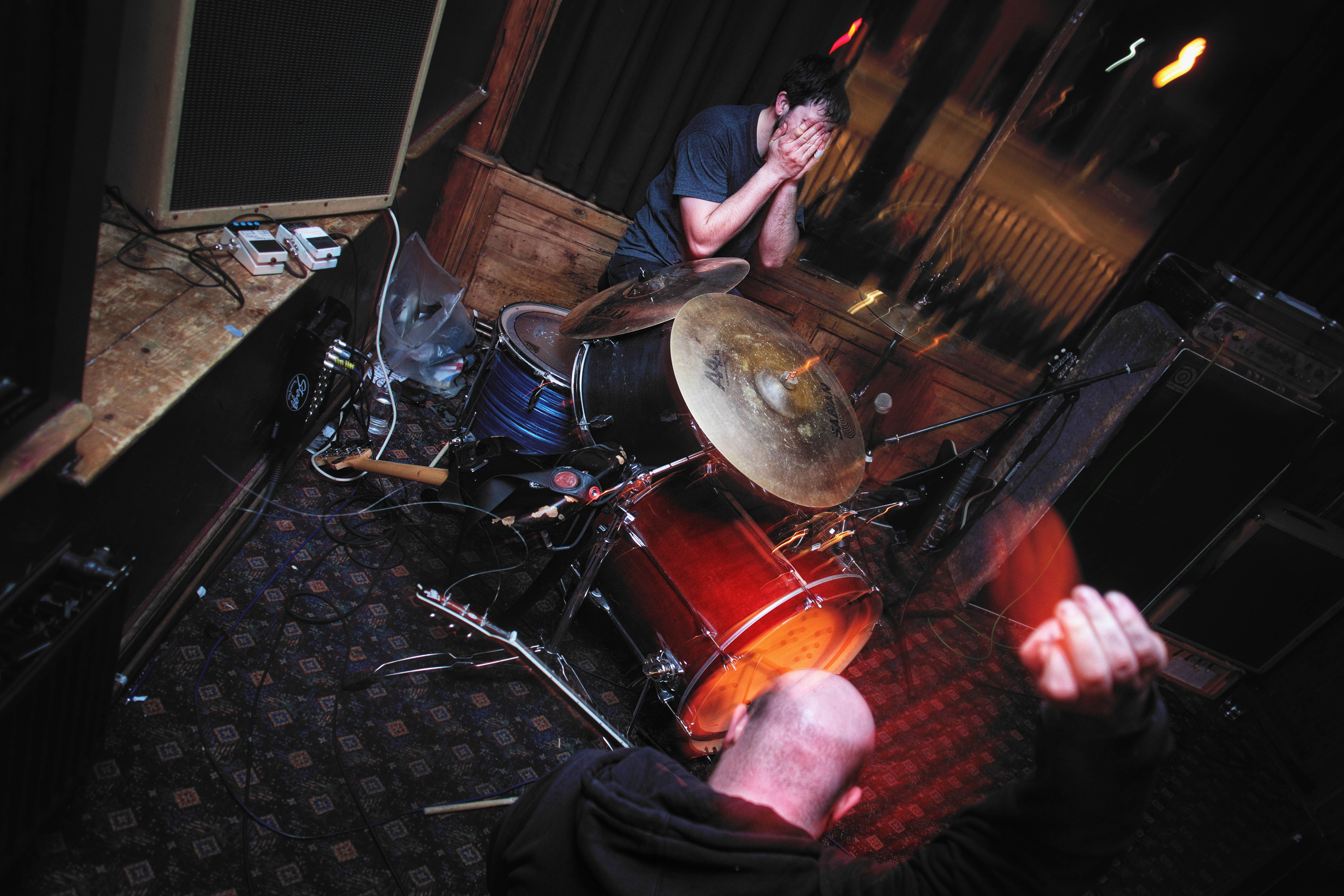 right now, the focus is on this band.

This band being a priority, did you set yourselves goals to achieve with Pale Angels?
No, we just wanted to start a new band to satisfy some urges.

Just go with the flow, huh? How do you write songs with bandmembers located everywhere? Do bandmembers bring in songs that are completed or is this a process in which all members are involved?
All the songs we have written so far have stemmed from ideas that with Mike or I have brought to each other. Some ideas have been more complete than others, but they always change and evolve once shared. It’s definitely a group effort. We just have to hold off on jamin’ until we are all in the same place.

Were the songs on Strange powers written especially for the EP, or did you have those finished way earlier?
The b-side was as well as the cover, but it was worked on with that live session in mind. We’d demoed the two songs on the a-side previously in hopes to out them on the next LP. Before we knew about the ARC session plans.

When did those plans take shape? And how did you get in touch with the ARC crew?
As I was booking the tour a month or so before we set off, I contacted a skateboard shop in Amsterdam to ask if we could play there. They turned out to be really cool and affiliated with the ARC. Once the shop show was in the works they then asked us about doing a live session whilst we’d be in town.

Are lyrics important for you? What issues do you address in your lyrics?
Yes, sure. If they’re worth writing a song about then they must be important in some way. All the issues addressed are personal topics. Topics that probably seem broad or ambiguous unless you know the direct meanings. Trying to figure out life and the weird world around you. 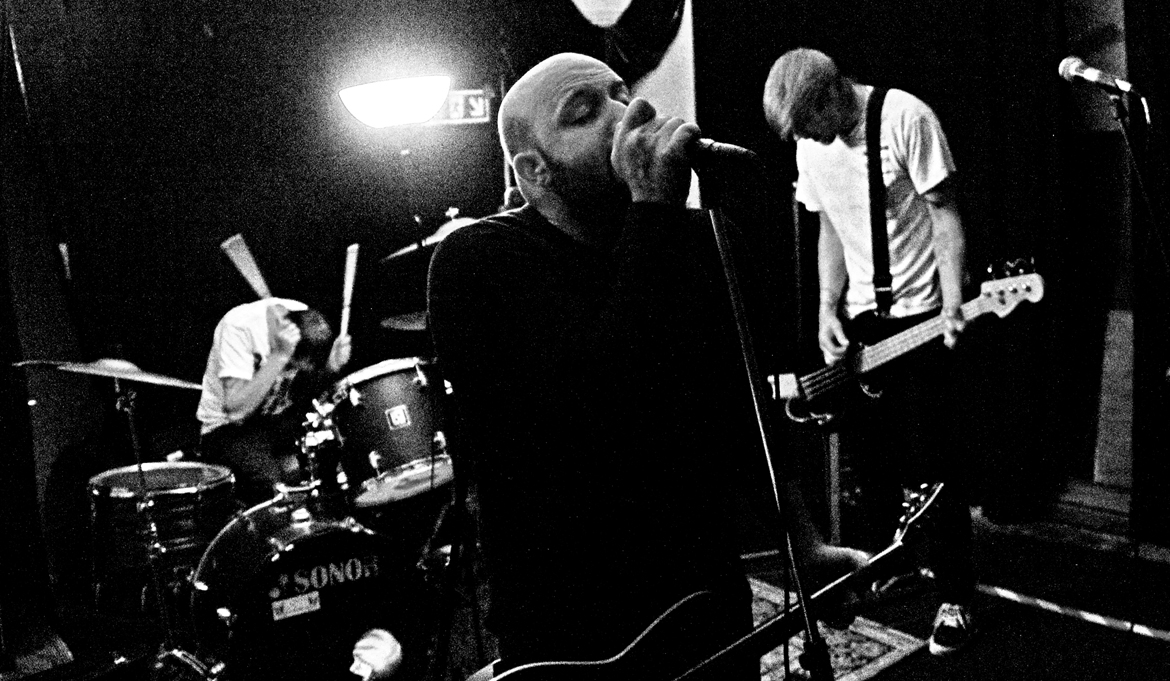 we had no idea what the band even was as little as a week before we recorded that LP.

I’ve read Primal play is also recorded live as much as possible. Is recording songs live as much as possible the best way to record for Pale Angels?
Yes, it was all done live apart from the vocals. Recording live seems like the only way that makes sense to me. Layering tracks and trying to get every single part recorded perfectly to gain individual control of every single component of every single song seems much too much of a clinical process. I imagine that routine can really suck a lot of feeling and humanistic quality out of a song/record. Not to mention how long that must take to achieve. We recorded Primal play on a Saturday and had it mixed on a Sunday. We couldn’t afford anymore studio time than that. So it was necessary for 2 reasons.

Looking back at Primal play, are you still happy with that album or would you rather have done some things different in hindsight?
I’m very happy with it, we had no idea what the band even was as little as a week before we recorded that LP. We each had ideas of what we wanted it to be like. We asked Ben Greenberg to record it because we really liked the sound and dynamics of The Men’s ‘Open Your Heart’ that he’d recorded previously.

Everything just seemed to work naturally, the songs were brand new, everything was brand new to us. There was so much that could have gone wrong, but none of it did and we ended up with a record that the three of us and Ben too, I think, are very proud of making.

I’ve read that Pale Angels started playing Nirvana covers. On Primal play some songs were clearly influenced by Nirvana. The Strange powers EP is moving into a much more varied sound though. Is this Pale Angels natural habitat or is the Strange powers EP something different?
Well that’s sort of true, Mike, myself and our friend Kris played a set of Nirvana covers a year or so before Pale Angels happened. Enjoying playing that set was what sparked the idea of the band. We eventually got into gear after asking Mikey if he’d be the drummer. We all fell in love with music, as kids through Nirvana and we wanted to be a noisy 3 piece. That’s where the influence lies I guess. It’s not something that is a conscious thought though, it wasn’t for Primal play. We never thought, let’s try and sound like Nirvana. This new EP was approached with the same attitude. We just needed to record 4 songs, so we did. There’s no conscious thought to sound different from the LP, they are just the songs we wrote and we thought they would be good enough to document and release. Our next LP will be some more songs approached in the same way.

Again: go with the flow. I like that mentality. In a (relatively) short time you have released an album and two ep’s. That’s quite productive. What more can we expect from Pale Angels?
We have a Euro tour coming up and plans to record a new LP in November 🙂

Looking forward to both the tour and the new LP! Thanks for your time, Jamie!