Despite a couple of setbacks Peter Hoeren has managed to release another compilation on Crucial Response Records. Starting From Zero has been in the works for over three years and one can only admire the effort Peter has put in this release as well previous Crucial Releases. Time for a chat.

The ‘Starting From Zero’ compilation is finally out, I guess it took over 3 years to get it finished. How come it took so long?
Different reasons, in the beginning there was a lack of interest in the compilation due to the fact of Facebook and Bandcamp. Later on when some more bands got confirmed the ball was rolling. During work on the compilation some bands broke up before they recorded anything, that happened a couple of times. That throw me back a bit. In between I had also some other projects in the pipeline e.g the ManLiftingBanner double LP, the Shipwrecked LP, the Voice Of A Generation fanzine number 4. 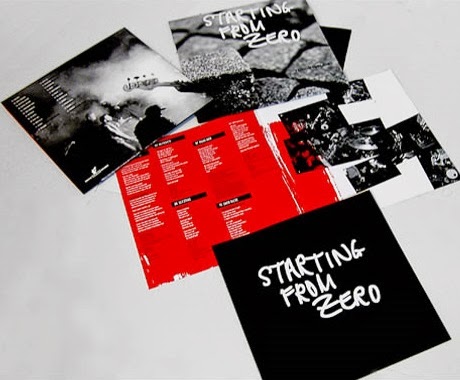 Marc, a long time friend from back in the days, did the layout. At the time he was working on the layout he got overwhelmed with work from his regular job, so he could work only on the layout in between or in his leisure time. I think the layout turned out cool but both of us are not satisfied with the printing of the sleeve. The printer screwed it up twice, another factor why the comp delayed.

What was you initial idea behind doing another compilation after the classic For The Sake Of Dedication and 2003’s One Track Mind?

The initial idea behind the comp is to get a diverse range of hardcore/ punk bands… straight edge bands, political bands, crust bands, hc/ thrash bands. And I’m still loving compilations, not sure though if I’m doing another one, actually to my surprise when I’ve checked my band correspondence recently I noticed it took even a bit more than four years.

Did you choose all the bands on the new compilation or did bands apply for themselves to be part of it?

Some bands I’ve chosen by myself but there are bands who asked to get on the compilation like Zero Progress for example. Rob, Atakeks and the aforementioned Marc, gave me tips for bands. In a way it was a collaboration between friends. There were request by a lot of straight edge bands but it was not my intention to do another For The Sake Of Dedication compilation.

Around in the end of the 90’s Crucial Response was probably the youth crew label around. Nowadays you’re releasing a wide variety of hardcore bands. Is that because of a lack of really good bands in the youth crew style?

That is true. But friendship comes first then anything else, The label is like a family tree, its a label with a history. I’ve never been interested in signing bands to make a next step label-politicwise. It’s all about friendship. Maybe I listen to a wider range of music nowadays than I used to listen in the nineties. But of course I do like Youth Crew bands. Mainstrike, Eyeball, Sportswear were all great bands and they are a part of Crucial Response Records. As for great YC sounding bands nowadays check out For Pete’s Sake, they are not Youth Crew by age but they are the best band in this genre  right now!

Side A of the new compilation is called Throw, side B is called Build. Can you explain the meaning behind this?

Always check the matrix I say 😉

So now this huge project is finished what’s next for Crucial Response, any new releases in the works?

A new record by ManLiftingBanner and a Sex Drive 12″

You’ve been doing the label for a long time. What keeps you motivated to go on?