Tonight Pig Eyes is releasing their new record, but they happened to find some time to answer these questions by Jonas. Not a band of many words.

Why did you pick the name Pig Eyes? Have you played in any other band before this one?

The name came up from a night out on town, at a certain bar, where all the people have deep set eyes with a redish hue. The sausage people you know. Yes, we have all played in plenty of bands.

Your songs are pretty long but remain interesting to listen to throughout – will this be the essence of Pig Eyes? Or have you just stopped digging your snouts into the dirt, as you’re a fairly new band?

Length is not important, girth is.

What is this heresy!? A six-piece? With two drummers? You must explain yourselves! What are the benefits and what aren’t?

The benefit is the thick, rich and creamy sound. The disadvantage is of course too many mouths to feed.

This doesn’t really sound like your normal run-to-the-mill scandicore, nostalgic new breed or boring sludge? Why did you choose this particular mixture? It’s like everything good I’ve heard before, plus something new that I can’t really pinpoint?

We really didn’t choose to sound like this, the sound chose us. It’s really just what happened. We just made our first LP, who knows what the next one will sound like. We’re not interested in scenes, but we’re really into a lot of music.

What would you say makes you really pissed off at the moment?

It would maybe the colonization of our minds, hearts and West Sahara. Otherwise we’re not too keen on collective anger.

Your upcoming release will be named Total Destruction of the Present, correct? Why did you name it that and how did you plan it out in the studio? What was the main inspiration for your cover?

Incorrect. “Total Destruction of the Present Moment”. The name comes from a conversation with God. It’s the destruction of the magic of the “now”, a black hole basically. The recordings for the LP was spread out over two years, the name for the album came later. The main inspiration for the cover art was mainly “filth”.

What tracks will be featured on your upcoming release? Could you tell me a little bit about how it was making them? Did they turn out the way you wanted, or even better?

There are four songs on the album. That’s basically everything we have recorded to date. The process of writing is always different, and sometimes it ends up satisfying.

So, you’re going to celebrate the release of your first 12¨ in Stockholm at Lilla Hotellbaren, are you stoked? Will you unleash ultimate havoc? In what way are you preparing for it?

Yes, we’re definately stoked! We’re having a conference this weekend. We eat, drink, discuss and rehearse for two days straight. Havoc will hopefully ensue. It all depends on the alignment of planets. 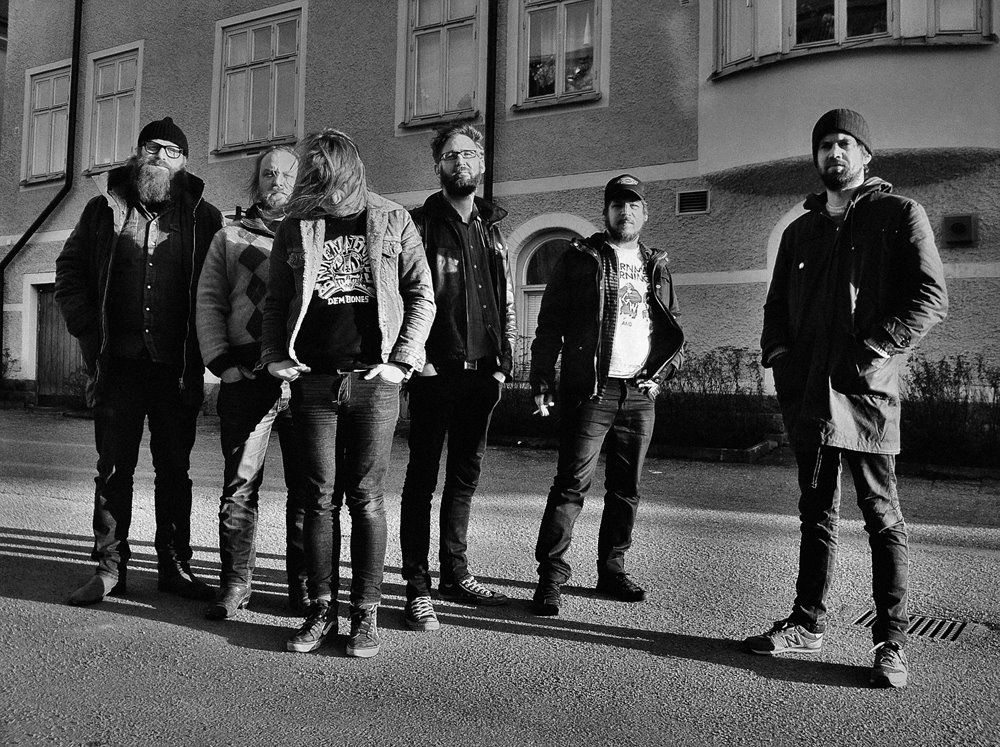 We’re not interested in scenes, but we’re really into a lot of music.

You’re also having a show in June at Kulturhuset in Stockholm with Doomriders, Red Doves and Swarm – could you tell me more about it?

Appearently they don’t sell alcohol at the show. Besides that, we don’t know more than you. Very anxious to see our friends in Swarm and Red Doves, though.

What kind of beer do you guys enjoy? Because I can’t think you guys are even near the straight-edge swamp?

In the interview before this one, Markus from Swarm wanted me to ask this question: so, Benjamin, what is your day-job and why do you love it so much?

Benjamin works on himself everyday and that’s a job, however not well-paid, that he enjoys.

When visiting the “hufvudstad” (city capital), where can I enjoy myself the most? How is the local-scene up there? Where do you guys usually hang out?

Don’t know of any local scene. We try too keep out of that thinking as much as possible. Local patriotism is a very very strange thing. If visiting Stockholm, you should visit Lion Bar or Stage. Both situated in the area of Hornstull. It will provide you with the true essence of the nations captial.

I’ve been listening to the song We Are Kings for two hours straight by now, could you tell me more about it? I love the weird intro, is that Microsoft Sam stuck in a flanger?

The song is a about two different types of kings, who fights this eternal battle. The intro is actually a humming amplifier through a vocoder.

What new albums can’t you really live without? Could you name at least three that you’d sincerely recommend?

We chose one each. However you asked for new albums that we’ve been listening to a lot. If we can’t live without them remains to be seen.

Are you stoked about any new release coming out on any other label in the near future?

What other new bands would you sincerely recommend?

Do you have any other shows coming up that we don’t already know of? Do you think you’ll be touring this year?

Yes, a private show, out in the countryside. Business AND pleasure. No other dates set at this point. No touring, but some shows here and there. It’s hard to find time for anything more than that at the moment.

What do you have in mind for the rest of the year, will you be producing any new material in the near future?

We hope to have a new 7″ out in the fall. We’ll start making the next record in the meantime.

Black Sabbath. Ask them about what happened to Bill Ward.