Starting and running a band in Russia is a bit more of a hassle than in our Western hemisphere. They guys from Reka never gave up and already released three albums and recently a split with Swedish In the Heart of Emperors. With the core of the band living in Moscow, one member in St. Petersburg and having Celeste’s bass player Sébastien Ducotté (from France) as a singer on the latest record.. it’s not the easiest way for touring and recording. Reka is slowly gaining more followers, already played on Flufffest, did a small European tour and are hungry for more. Alec, the guitarist was eager to answer my questions.

Hi Alec, before I did two reviews of your releases I saw Reka live at the Fluff festival in Czech Republic. When you look back how do you feel about your show and the festival?

At first I would like to tell you many thanks for your reviews! Man, you’re a damn x-ray, I mean you really understand the music and I spend a good time (with laughs) reading those reviews. It’s a pleasure. Unfortunately we don’t play ice hockey [Maurice: he’s referring to this review.]

About Fluff Fest, for sure it’s the best known and the mostly loved punk-hardcore festival by Russians, we’ve been visiting Fluff a few times just as visitors, so it was a pleasure to play there! The show was sick despite the crossing time with Year of No Light on the big stage, but we had a big crowd anyway, we were very honored. Thanks again everyone!

What I also remember of that show was the crowd surfing young kid. Was it one of your kids? If so, does he really like the sounds of Reka and Rosetta? [Maurice: he also surfed the crowd during their set]

That’s Alex, the kid of our close friend and relative Spas, this young boy has tons of merch and as well as his father likes good music. For sure he likes crowd surfing. 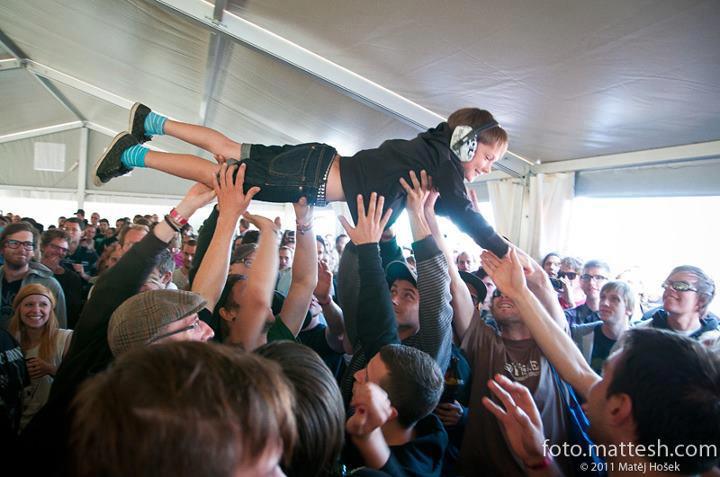 Reka means the river in Russian.

Last September you played for the first time in Amsterdam, the Netherlands. How was the show?

Unfortunately we had trouble during our tour, our van totally broke down near the Austrian and German border and we were stuck for five days near the German city Passau so we cancelled five shows including Amsterdam, Ghent, Plauen, Dresden and Aachen. That was really disappointing for me because those cities were the ones I looked the most forward to. Luckily we found some friends in Passau – with help of Felix we took a new van from Fluff Wheels and continued our German dates until our friends from Belarus transported the new van to take us back home.

Less is known about Reka in the Netherlands, can you tell us some history about the band?

Well, before we played in two different screamo bands – Fortunae Verbera and Optimus Prime, and somehow we grew into the music which we can’t make in our bands so we decided to create Reka. Which is me and the vocalist Jimbo from OP and Denis, Igor & Pavel from FV. In this line up we recorded the first two albums, with lyrics in Russian. Then our roads changed with Jimbo and Pavel so their places where filled in the first Euro Tour 2010 with Celeste by Anna (drums) and Sebastien on vocals. you can hear them also on “Renaissance”. Now Anna’s place is filled in by Andrew (he drums on the split with In The Hearts Of Emperors).

During the last European tour our singer was Viktor, singer of In The Hearts Of Emperors, but unfortunately that was a single collaboration, we spend a very good time together. We met Viktor as well as the other guys from the Emperors in 2011 when we played 4 shows together in Europe.

What does the name Reka mean, where does it come from and why did you choose this name?

Reka means the river in Russian. When we were creating the name we tried to make something that will be sound interesting as well as had something from the Russian language as well as explaining the music. I think this name has all of these pieces.

Your band is influenced by Amen Ra, Neurosis and other bands in that style. Was that always an influence or did these influences come naturally?

Before we played screamo in our previous bands, but we slowly started to loved the art of something deep and slow, as well as dark. We couldn’t make this music in previous projects, so we created Reka. This style came naturally for us as musicians in 2007. But of course we were into Neurosis, Cult of Luna, Godspeed You Black Emperor, June Paik and Explosions In The Sky; those more than Amen Ra.

How did you meet Sébastien and isn’t it difficult to have a French singer when you live in Russia concerning touring, recording and rehearsing?

We did a tour for Celeste in Russia and Sébastien played bass for Celeste on that tour. That’s how we met him. Then we played a European tour with Celeste in 2010 and asked Sebastien to be the vocalist, that’s how it happened. It’s not simple to have a foreign vocalist, but this collaboration gave us a good experience, as well as Sébastien’s vocals sounds like hell. We love him.

Will he also sing on new releases?

Our last conversation was not really promising a long life for our collaboration, but let’s see! Sébastien’s now playing bass fulltime in Celeste and he can’t give us so much of his time. At the moment we’re trying to find someone in Russia, because we want to do some Russian dates. It’s strange but we play more in Europe than in our homeland.

How does Reka write songs? Is it a group process in the rehearsal room or has anyone already the base of a song?

Before the process was different, at the moment most of the basis is written by Denis and Igor, then I join and make this sound more melodic. In the weekend our drummer Andrew is taking the train for a weekend from St. Petersburg and then we practice together. As you see we’re not searching for the simple way!

What are your lyrics dealing with?

Our lyrics deal with some individual experiences of writers who explain the worst reality around us. Our first vocalist was very into the anti-utopia books as well as some left wing theories; he shared these ideas in his lyrics. Sébastien write a little bit different, but the theme is close. Viktor writes short and deep philosophical lines, that also works with our music. I love all these guys. 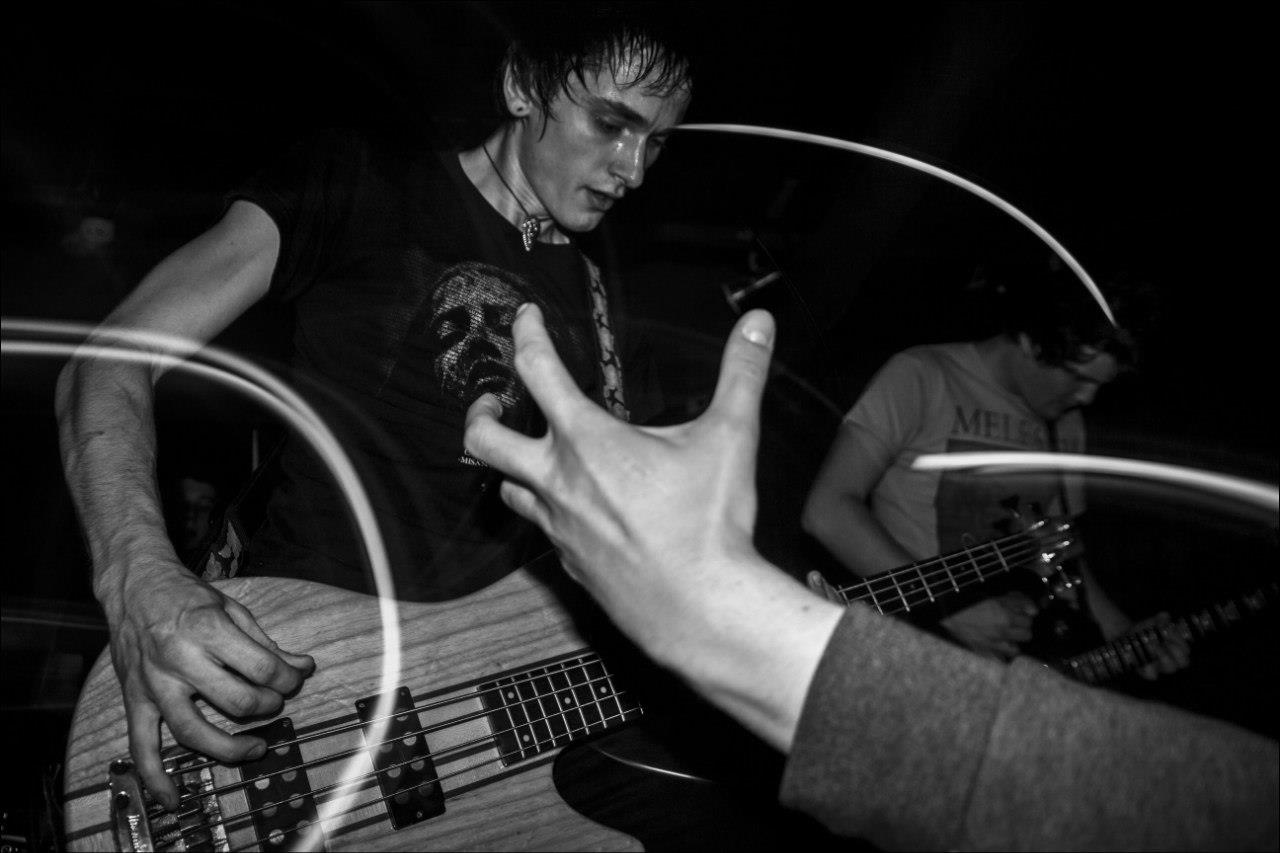 What happened with Pussy Riot is really unfair and it’s crossing all the laws. They made an administrative offence so the punishment should be a fine or a few days in prison. But this is Russia, anything’s  possible here.

If you could pick a band to play a show and do a split album with, which one would you choose and why?

I would say Karysun, just because I love them.

Can you tell us how your life is in Moscow? What kinds of jobs are you guys doing or are you all still studying?

Life in Moscow simply sucks. It’s just too grey and too depressed. About work, Denis is a video engineer, Igor works as an administrator in some gym, Andrew is a partly working as a construction worker and I deal with travels and visas. When we are going on tour I take these responsibilities.

Everyone in the world knows about the situation around Pussy riot. As a band from Russia, what is your opinion on their imprisonment and the ideals they want to reach?

Pussy Riot wanted to spread political critical words towards narrow minded people; they used the church for that (which is not really a church by the way). That’s what made those people think they are offended and that’s stupid. I can’t believe how people can’t see the real meaning of the action. As well as that church, it’s something like a church-mall, on the ground floor there is a carwash center, as well as pizza restaurant behind the walls. I would say this is just a farce because it wasn’t a church in the usual meaning.

What happened with Pussy Riot is really unfair and it’s crossing all the laws. They made an administrative offence so the punishment should be a fine or a few days in prison. But this is Russia, anything’s  possible here.

For Reka, is it difficult to write music/lyrics in Russia or play a show? Do you feel you are controlled in your actions?

That’s true; it’s hard to play Russian shows with a foreign vocalist, so we only can do this when we’re planning some big shows to cover the expenses in making the tour. But most of the time we concentrate on recordings.

What is your opinion on the political situation in Russia? Did something change the last couple of years?

Of course there are no changes, and this will not change until the Putin era will end.

How about the economy over there, what can I expect when I visit Moscow?

You can expect hospitality from us and the prices a little bit less than in Europe, (especially for alcohol and cigarettes) but all your products are tastier. Just don’t expect too much.

When you tour through the rest of Europe, what is the most different in contrary to Moscow?

Different are the roads (much better), tasty vegetarian food and some good old friends! And this is comparing to most of the cities we played! I also forgot about the squats, they are sometimes cleaner than a flat where we live in. I would like to live that life.

What does the future bring? Already made songs for a new album? In which direction will it go?

We are making a few new songs for some compilations or a US/Japan release. We are planning Japanese and US tours in this year and are very excited for the new record, for the CD collection it’s gonna be the last piece of the pentagram (each album consists of a different element on the cover). It’s gonna be darker and heavier than previous one. Finally how we really want to sound.

Any other final words you want to say?

Thank you for reading this! I wish we could play in The Netherlands one day! We would really love to. You can check some of our updates over here: facebook.com/rekaband and listen to music on reka.bandcamp.com.