Quite some time ago we (Said And Done) played a show with Screw Houston, Start Screaming! and they sounded fresh, lots of melody and interesting stuff going on. So after Rold reviewed their record I decided to do a little Q&A with them to see what they’re up to at the moment.

So what’s on your minds guys? What’s happening?

Hi! Well, it’s all good. At the moment we’re handling the usual band stuff, you know, syncing 5 different agenda’s so we can figure out how we can play as many shows as possible. We’re trying to set up shows for next year and already started working on some new songs! We keep ourselves pretty busy, but that’s exactly the way we like it.

Let’s tackle this one first. Did you recover from the not-that-great-review on our site yet hehe? I really liked you guys when we played with you, but different people, different opinions of course. How do you guys deal with stuff like that? Brush it off and ignore it? Take it to heart? Prove him wrong with the next record?

Hahaha yeah we ‘recovered’ from that. Well like you said, different people, different opinions. It always sucks when someone does not like what you are doing, but that’s life. The review got some cool comments though. People seem to like what we do live! And also take the time to post it on a webzine. To get back to one of the questions, we don’t ignore the criticism we get in reviews. So we posted this review on the web, like we do with all reviews we get. We write the music we like and we are proud of our new record, but we are also trying to evolve as a band. We try to get better every time and we take all the feedback we get seriously. When we think that the reviewer has got a point and there is something we can improve, we take it to heart and try to work on it. Who knows, we just might prove him wrong with the next release. But still, our main purpose is to make the music we love and there will always be people that don’t like what we do. Though luck.

Our main purpose is to make the music we love and there will always be people that don’t like what we do. Though luck.

Good, with that out of the way…. It’s probably has been asked a couple of times before already, but since I have no idea our readers might not either: Where the hell did that bandname come from? Big Apollo 13 / Tom Hanks fans?

It’s funny because in our first year nobody mentioned it or wanted to know why we choose this name. Even with the first reviews on our demo. But now more people heard of us and with the new release we get this question more often. When we started this band we needed to come up with a name. So we made a huge list of names. Most of which sucked, weren’t original or already existed. Then one of us came up with Screw Houston Start Screaming! It’s about losing control and being in a situation where panic is all there’s left. The problem (Houston we have a problem) can’t be solved and everything is lost. So Screw Houston Start Screaming!

Any ex-members of story we need to know about? Let’s introduce the band to the world.

We started with Bram Bergs on drums. But he wanted to focus on playing bass in All On Black. So a year and a half ago we found a new drummer in Marc van Gastel. He played drums in Southern Way. Matthijs, Maarten, Dennis and me all played in different bands before ranging from rock to punk, hardcore and metal. So we all have different backgrounds. We found each other through an add on the Internet by Matthijs and Maarten, who wanted to start a hardcore band like Gallows and Comeback Kid. Two and a half years ago we started the band like that. First we played some covers but we soon turned to writing our own stuff. After writing some songs we started playing shows and we recorded our demo EP. After half a year we had a setback when Bram decided to quit the band. Luckily we found Marc, who learned the songs really fast so we didn’t have to cancel any shows. Now we are still going strong and we are all eager to make music and play shows together.

So what are the biggest influences on the band? Aside from NASA that is?

Most influences come from ‘new school’ hardcore bands with a rock and roll vibe like Gallows and The Ghost Of A Thousand. But like many others we love melodic hardcore as well. We try to find a good mix between all the music we like, which is not always easy. The most important thing is that all our music is sincere and comes from our hearts. We don’t specifically try to keep it within genre ‘boundaries’ or whatever.

You guys just released your full length. What’s next? Taking the world by storm?

Yes Pinky, tonight we’ll take over the world. One step at the time. Some of us have jobs and a house. Some are still in college. So we plan our shows really carefully. Syncing our agenda’s and picking weekends and holidays when we want to go on tour is a returning challenge. Unfortunately some really cool shows got cancelled this year and we are now looking to make up for those. We are planning a Scandinavian tour and a new French tour (we get a lot of cool reactions over there). And hopefully we can do some sort of a Eurotour next year. Also, between playing shows and releasing our new record we have already started with writing new songs, because we don’t want to sit on our asses. We are just excited to put more music out there!

What’s your favorite Screw Houston, Start Screaming lyric and why?

My (Roelof) favorite lyrics are those on As I Watch My Memories Go Up In Flames. (the title says a lot about the subject), because this is where the whole album comes together. The lyrics on the record tell a story and this song is the final chapter. It is about a boy and his nemesis and it sums up all the frustrations that build up as the tale unfolds. It’s a heavy story with a sad ending and this song reflects all those feelings perfectly. I think the music and the lyrics really strengthen each other on this song. That’s what makes the lyrics all the better as far as I am concerned. 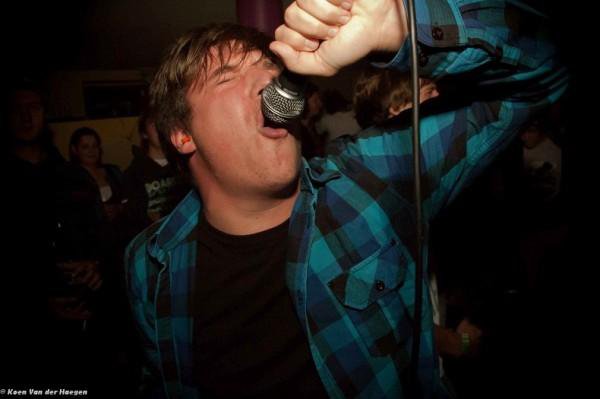 The most important thing is that all our music is sincere and comes from our hearts. We don’t specifically try to keep it within genre ‘boundaries’ or whatever.

Miss Universe time! If you could go back in time and change a single moment in history. What would it be and why?

I would change that Tycus changed their name haha. No but seriously. A lot of really awesome hardcore bands quit lately. I would love to change that, so I can see them live again. For instance, we were really bummed out when the Ghost of a Thousand quit this year. This really was one of our favorite bands and it is a shame we won’t be able to see them live again. On a brighter note, we have the opportunity to see Verse next year! That’s definitely something to look forward to.

What should people absolutely remember about Screw Houston, Start Screaming after they read this little Q&A?

Screw Houston Start Screaming! is not your typical hardcore band. Check us out and find out for yourself!

That’s about it. Anything to add?

Support the scene and the bands within it. Go to shows and have a good time! Thanks a lot for the interest!