Most independent record labels dream of putting out a release by influential bands like the Bouncing Souls and Hot Water Music, Shouting Street Audio Cassettes was able to accomplish this goal on their third release. A label devoted solely to releasing music on audio cassette, Shouting Street has released tapes with legends like the Bouncing Souls and Hot Water Music, and emerging newcomers like NJ’s Banquets. Though their medium of choice for releasing music may be old, the label focuses on putting out the highest quality cassette release. From the music, to the artwork, to the packaging, a Shouting Street Cassette definitely stands out in a world of digital and vinyl releases. Christer Davidsson from Shouting Street Audio Cassettes took some time out to answer a few questions.

Why did you decide to start the label, and what was your first release?

I’ve wanted get a little label of my own going for quite some time actually, I just never got around to it until recently. I used to play bass in a band and when we went on our first tour to Germany I started to understand the importance of the people around the bands. I really got inspired by all these people who promote small venue shows, all the independent clubs and bars that keep live music alive, kids who take care of bands on tour, feeding them and putting them up for the night. And of course all these little awesome labels that are out there if you look hard enough. So, I guess it’s just the fact that I want to do my part in alternative music without playing music myself that made me start Shouting Street.

My first release was the split with Virgins and Over Starts & Gutters. Virgins, or VRGNS as they call themselves nowadays, are pretty known already and I wanted to team them up with a lesser known band and went with OS&G. They had just self-released their debut album which I love so I got in touch with them and that was that. 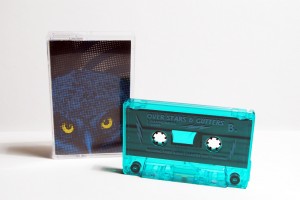 In an time when independent labels are fixated on spending money to release vinyl, what was the motivation to focus only on cassette releases?

Well, let’s be real. If I had enough money to release vinyl I’d do it without a doubt. It’s too expensive and I don’t have patience enough to save up the cash to do it. I’d rather spend my money on other things to be honest. Shouting Street is not the most important thing in my life, I’m just doing it for fun and cassettes are cheap enough to keep it enjoyable. So far I haven’t earned a cent doing this, ha ha, I’d rather just give the cassettes to the bands and trade a few with distros in exchange for records.

Also, I grew up with cassettes. That’s how we rolled back when I was a kid so there’s certainly a nostalgic twist to this thing. Basically, I think cassettes are awesome. They also sound pretty good as long as you do it properly.

All of the releases on Shouting Street have had really awesome artwork, and detailed layouts. How involved does the label get with the artwork for each releases? 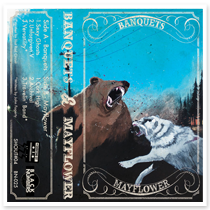 Thanks! I actually have a great deal of input when it comes to the artwork. I made all the art for the first two releases and I think they turned out great (I may be slightly biased though, ha ha). For the Bouncing Souls / Hot Water Music I couldn’t do much since it was already out as a 7-inch on Chunksaah and all the artwork was set. It would have been fun to do it myself but I like the simplicity of it and think it looks really nice and clean. For this new release that is coming out (with Banquets and Mayflower on it) Teddy from Mayflower knew this great artist so we decided to use one of his paintings for the cover. It’s a bear and a wolf fighting on the railroad tracks while a train is approaching in the distance. Now, how amazing does that sound? Cayetano Valenzuela is the name of the guy who made it, he does great things.

You are located in Sweden, while most of the music you release is from bands in the US. What is it like working with people half way around the world? What are some of the challenges you face?

Working with people from the other side of the world is always nice. I like speaking and writing in English even though I’m probably not as good at it as I like to think, ha ha. Before I started the label I ran an online fanzine called Mutinyzine which went pretty good and I still have a ton of contacts from that period. Most of the music I listen to comes from the U.S. so I don’t really think about the fact that I release U.S. bands, I just release good music and the origin of the bands doesn’t matter to me.

As far as challenges go, I haven’t realley experienced any major ones so far. As long as you work with the right group of people it’s usually a smooth process. Phonecalls to the United States are pricey so all contact is via e-mail but since everyone’s online pretty much all the time it’s not a big deal.

Split releases are a great way to expose people to new bands. Up to this point, all of the Shouting Street releases have been splits. What made you decide to do split releases, and as the label progresses will you stay with this model or will you look to do branch out and do releases by just one band?

I’m not sure a whole lot of bands would be interested in putting out a fullength on cassette. Usually I approach a band to see if they want to do something and they hit the studio to do a few songs. I want it to be a fast and simple process. It’s more fun that way. The Virgins songs on the first split were actually already recorded live at The Fest when I contacted Sam. He asked me what I thought of them and I thought they sounded awesome so we put them out. Most songs I’ve put out so far are exclusive to my cassettes, which is a fun thing. I might do a one-band release or two in the future but it’s become kind of a trademark for the label to do splits and it works just fine for me. Also, a great thing about splits is that people buy the cassette for one band and get a new favorite band along with it. Sometimes the bands that I do splits with are friends and sometimes they don’t know eachother at all. It’s all good.

This year you did a super limited cassette release of two legendary bands, The Bouncing Souls and Hot Water Music. How did this release come about?

I’ve been e-mailing quite a lot with Zak Kaplan at Chunksaah in the past with interviews etc. for Mutinyzine. He’s a great dude and has always been really supportive of the things I’ve done. He’s also in Detournement who are on my second release (amazing band by the way) and one day I got an e-mail from him asking if I would be interested in putting out the Bouncing Souls / Hot Water Music split on tape. He though it would be a fun thing to do and a good way to get some light on Shouting Street. At first I had my doubts, nah, just kidding, ha ha. I said yes right away. We sold the cassettes via the Chunksaah mailorder and it sold out in less than an hour. A few days later I saw a white copy go on Ebay for $28 plus shipping. That’s just silly, but I thought it was pretty cool anyways.

Shouting Street just released a split tape by newcomers Banquets and Mayflower. Why should people check out this release?

First of all, people should buy it because Banquets are simply brilliant. I’ve been listening to their debut 7-inch “This Is Our Concern, Dude” over and over and every time I do so I’m amazed by how awesome this band is. I hung out with Dave, guitar, when he was touring with Static Radio NJ in Sweden so we’ve been talking about doing this for quite a while now. Even before the 7-inch came out, he sent me some early mixes of songs and I knew right away that this needed to be done. Then Dave brought Mayflower along and told me to check out their debut LP on Kiss Of Death and that was that. Mayflower is a bit rougher around the edges and a nice contrast to Banquets “cleaner” sound. This is a co-release between my label and Black Numbers where Dave works. The cassettes have been delayed over and over but yesterday I finally got the news that they’re on the way to Dave’s house and pre-orders will ship next week. We’re beyond stoked!

What’s one band you’ve been jamming lately (your label or not) that you think people should check out?

I always listen to a lot of different music and it’s hard to name just one band or one record. Lately I’ve been listening a lot to Touché Amore’s “Parting the Sea Between Brightness and Me”. It came out on Deathwish a few months ago and it’s amazing. Also, the deluxe packaging of the vinyl is one of the best looking releases I’ve seen. Other than that, this year’s highlight for me is the latest Young Widows LP “In and Out of Youth and Lightness”. It’s even better than I expected it to be and the artwork is the best artwork ever. I love Young Widows. 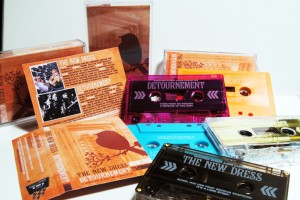 You can check out Shouting Street and some of their releases at the link below.
http://www.mutinyzine.com/shoutingstreet