I think one of the first persons on the site that wasn’t from the Netherlands was Daniel. Why do I tell you this? Because when we asked about new bands (so we could do a new breed with them) he suggested we’d check out Static Void, his own band. Smart move Daniel, smart move. So we did, and since we really liked what we heard, we did send some questions his way. In between filling in his tax return he managed to answer them for us, so here you go. Meet Static Void.

Hey, what’s going on over there? What’s on your mind?

Hey Pim, first of all thanks for doing this with us. Right now my mind is filled with numbers, since I gotta do my tax return before next Monday. I’m using this as an excuse to take a break from it. So thanks again! Besides that and to focuse on the band, I’m really happy right now and proud of what we did within the last few months. 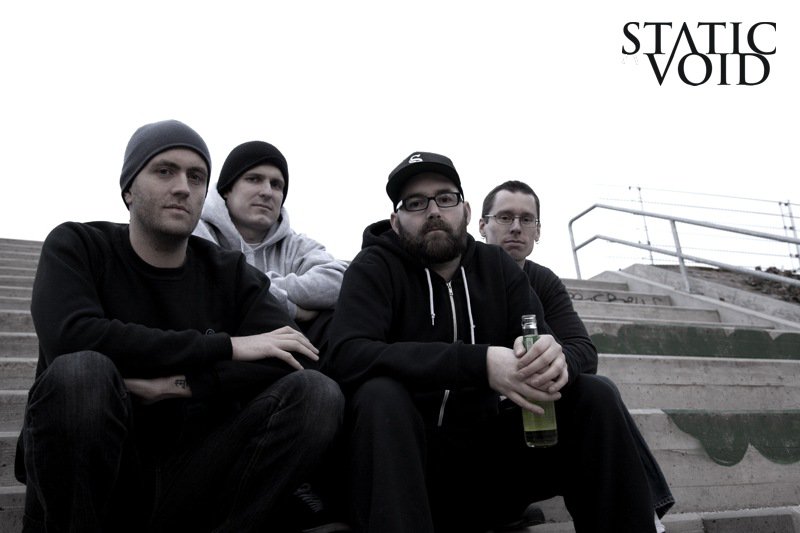 I’m really happy right now and proud of what we did within the last few months.

Congratulations, you’re like the 3rd or 4th person to realize that. I always loved the sound of it and I think it fits us just perfectly. There were more people asking if we got the name from Javascript code. Actually, Vic took it from there..

Haha I knew (being a webdeveloper myself), but I figured that wasn’t the origin. Nice one. So how did the band come together, there’s people from Sirens in the band, as far as I know, but aside from that?

SIRENS split up because our guitar player Torsten left the band. The rest of us (Arne, Michael, Micha and me) immediately decided to continue playing music together. It took us some time to get it started, but after one and a half year we got our debut LP “monosyllabic” recorded and already played two small tour, one in june and one last week. Those shows made me finally realize how I missed that. Feels so good to have this part of life back..

Static Void is a straight edge band, how important is it for the band? I can’t seem to find the lyrics anywhere, so I don’t know if the lyrics deal with it or not.

Since now I didn’t write any lyrics that deal specifically with that topic, but there will be some edge-content in upcoming songs.. I can’t talk for the others but I really like calling it a straight-edge band. Those dudes are all in my list of “ten people that will be edge until forever” so this makes perfectly sense to me. STATIC X VOID – dry but not shy! (at least that’s what some flyer for a show on tour said)

Since we just mentioned lyrics, what’s your favorite Static Void lyric so far and why?

To cut it down to a single line, it might be “stell dich selbst infrage, trag dich selbst zu Grabe” which means something like “put yourself into question, bury yourself”. It’s taken from the song “none” which deals with people and their view on certain topics, how everyone assumes and implies aspects and seem
to decide for everyone else. It’s about me trying to cut myself out of that picture I get, trying to be objective and impartial, questioning everything.

How would you describe the band to people that never heard you, because I don’t really know what band I would mention to compare you with. It sounds really melodic and it grooves. Maybe a band like Quicksand in a way, but rawer, but that might be just in the recordings too.

In the reviews we got on our LP, we got often compared to Quicksand, Helmet, (early) Boy Sets Fire.. Of course I know which riffs make people compare us to what band. But to me, the music as a whole doesn’t really sound like any of these but as long as I like all those bands compared to, I let them talk.. Last friday in Muelheim a young girl came up to me after the show and asked “So, that was Metal?”. I denied and told her that it was Rock.

Last friday in Muelheim a young girl came up to me after the show and asked “So, that was Metal?”. I denied and told her that it was Rock.

Awesome, people really seem to cling onto their little genre definitions. So what are the (future) plans for the band?

There’s no real masterplan, I just hope we keep on playing shows and doing some tour within the next months and years. There are some areas I’d really like to tour and never did, like Scandinavia for example. Since Micahel is starting a vegan café in Mannheim soon, it will be a little difficult to play as much as I’d
love to but I’m sure we’ll find a way. We also started writing new songs for upcoming whatevers.. To keep people curious about the new material, the internal “sounds like”-list has been expanded to bands like Tool, Weezer and Chamberlain.

Scandinavia is awesome, be sure to do that! What do people really need to remember about Static Void when they’re done reading this short interview?

I don’t think my gibberish is memorable anyhow, I’d like people to listen our music, buy it, download it, stream it on grooveshark or whatever. Listen to the complete record, not just one single song. I don’t think anyone will listen to it as often as I did, still do and will do in the future, but you can try. I still love it and don’t skip on any of the songs, that might be a good sign.

This is my latest “Miss Universe” question I ask most band in these ‘new breed’ interviews, but I’m curious to see what you come up with. If you could go back in time and change a single moment in history. What would it be and why?

I’d go back to the 70s or 80s and sustainable stop people from creating the internet. Might be interesteing to see what the world nowadays would look like without it. I might also go to some cool concert while I’m there (or do I have to say “while I’m then”? Timetravelling confuses me…

Haha, ok, let’s close this off. I’m going to let you take control. Ask yourselves a question, and answer it too.

Oh wow, I thought I was lazy..well, what do you think about swnk.org? I’m seriously in love with it. While hardcore seems to be dying in the Netherlands (at least that’s my impression from the last concerts I went to) in the real world, this might be at least a lasting heartbeat in the internet.

It’s a test man, you get all this power and this is what you do with it… But thanks for the kind words 🙂 Guess that’s it. Anything else to add?