For the last few years, Brabant based initiative Support Your Locals has been doing just that: helping out young hardcore and metalcore bands in the greater Eindhoven area and beyond. On saturday May 25th, OJC De Roos in Deurne will see the first edition of SupportYourLocals Fest. Instigator Lesly Klaverdijk tells us what’s up. And scroll down to win tickets!

So, you’re gearing up for SupportYourLocals Fest. Excited yet? Or mainly sleepless nights?

Haha I am excited for sure! This is the first edition of SupportYourLocals Fest, however, this is not my first festival! Not a lot of sleepless nights…yet…Haha, normally that starts out a few nights before the actual festival.

I assume this event is connected with the booking agency of the same name, so let’s start there. What does Support Your Locals stand for and how did it all get started?

It all started out somewhere at the end of 2010, when helping out a band of a friend of mine. I helped them with making new plans and step away from playing about 3 shows a year and not going forward. From there out, the word got on the street that I was apparently good at it and started the initiative Support Your Locals Booking and Agency. Soon, loads of bands came up to me and asked me if I could help them, which I did, with all kinds of stuff. Shows, merchandise, plain sociality towards other bands and what not. This grew out to be bigger than I could handle and nowadays it’s the four of us. There’s Odet, Hylke and Sebastiaan that help me out with shows, planning, festivals and what not.

You have a growing roster of young bands. Do you have any special criteria for selecting bands you work with?

As long as the band is motivated and thinks about what they’re doing. Creativity is a big issue with a lot of bands and that’s basically what the criterium is. And my co-workers have to agree as well ;).

So how did the idea for the festival come up? And why did you decide to hold it OJC De Roos in Deurne, a rather small venue for such a big number of bands. Why not at Dynamo in Eindhoven for instance?

I did Maxfest a little under a year ago with Max Cleuren at the Walhalla youth center in Sevenum and I decided it was time for something a bit more local and more in name of Support Your Locals. I do agree that it’s quite a small venue, which is not necessarily a bad thing. It’s a youth centre, so the ticket price is relatively low. Also, the Dynamo and venues like that are usually fully booked in the weekends so it’s quite hard to do it there.

You have 12 bands playing. Was it your intention from the start to have this big a bill?

Well, kind of…The whole point was getting SYL-roster bands to play. After a while more bands tagged along that deserved a place on that stage and some headliners as well. So no, originally the plan was just SYL bands and it got out of hand, in a good way!

Affiance from the USA is headlining. Originally ShowYourTeeth from Austria was going to play, but they pulled out. Do you think a show like this needs an international headliner? Wouldn’t the local bands be able to pull enough people on their own?

I don’t think it ‘needs’ a headliner necessarily but that doesn’t mean it shouldn’t have one. Part of the whole idea of Support Your Locals is getting small bands to get recognition, because people saw them with a bigger band. So basically, there’s always a few people to show up for the headliner and we can create some new ‘fans’ for the supporting bands.

I speak from experience when I say that this many bands on one day can be a logistical nightmare. What is the worst that can happen according to you?

Haha, pretty much the worst thing that could happen is that my co-workers call in sick and I have to do it all on my own. Also, people not showing up or being where they’re supposed to be is always a bad thing. Remember the sleepless nights we were talking about? Well…that’s the stuff I think about and crawls around in my head!

Any other activities by Support Your Locals we need to be on the lookout for? Any future plans?

Well, we’ve got quite some shows coming up such as Polar (22-05) SYL-fest (25-05) and Evergreen Terrace (12-08) and we’re cooking up some more stuff! Just keep an eye on our Facebook-page to keep updated on all the shows we’re doing. Furthermore we are still looking to expand and get more people on board and spread the word!

All info on SupportYourLocals Fest can be found in this Facebook event. 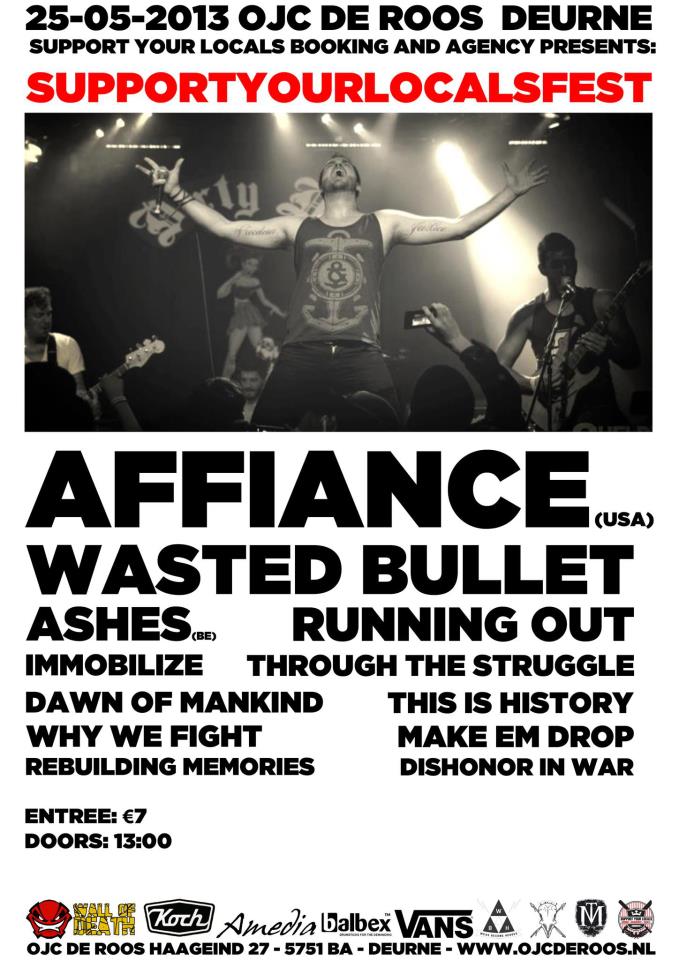 The contest will be open until Thursday the 23rd of May and we’ll randomly pick two winners. We’ll be in touch if you’ve won.

Bands: Running Out, Wasted Bullet, Ashes, Affiance, Make em Drop, This Is History, Through The Struggle, Immobilize, Dawn Of Mankind, Why We Fight, Rebuilding Memories, Dishoner In War