So I got the opportunity to speak to the nice guys from Swarm. They’re on De:Nihil Records and really rock. Currently they are in the midst of releasing their newest two-song 7¨, with the song Born To Ruin on the A-Side and the song Santiago on the B-Side. This interview with drummer Marcus Andersson from the band also gives me the chance to spread some well needed love for the Swedish scene. 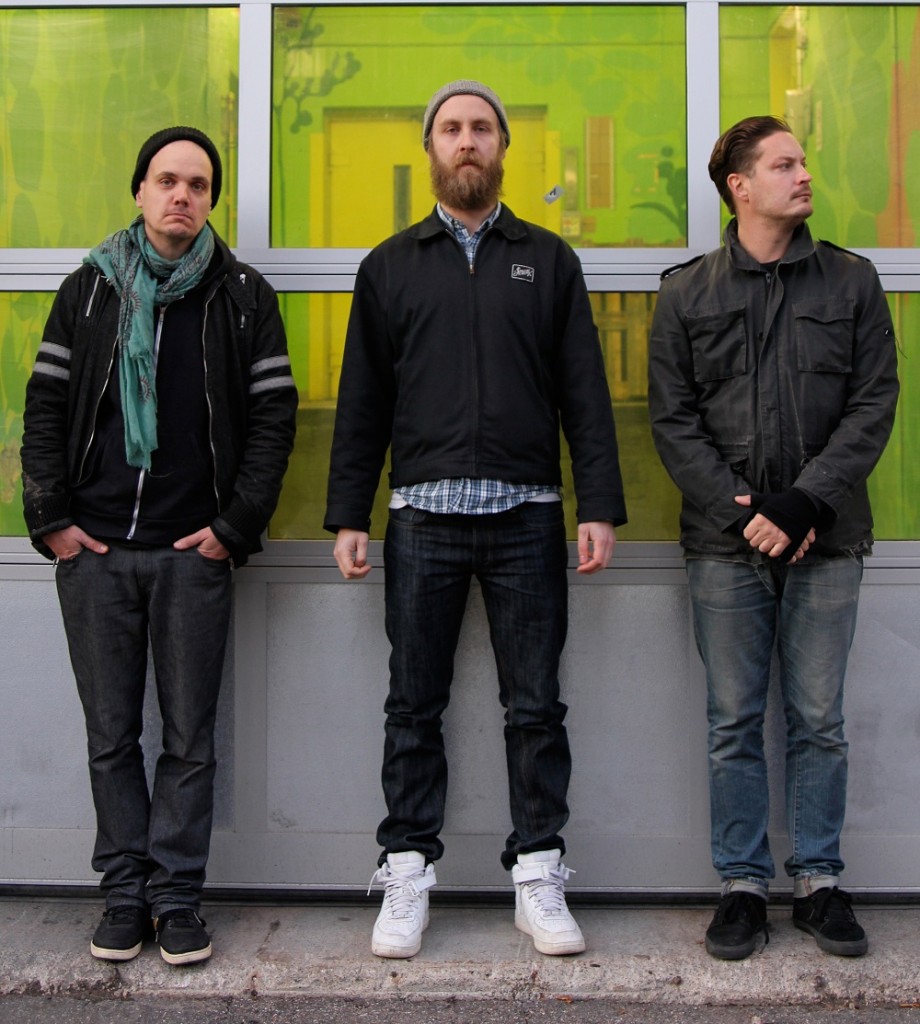 We are three friends that wanted to play music together and we had been talking about it for a couple of years. Finally we got our musical act together, pun intended, and started doing this.

So you’re a pretty new band, could you tell me something people don’t already know? I’ve heard that some of you have played in Disfear before Swarm. Do you have anything else to say about your musical career? Why the name Swarm?

The name just sounded cool. We know there are more than a few bands before us that have used the name, but we don’t regard that as a problem. It will only add to the hassle of finding us online. Me and Uffe are in Disfear and Johan has been in Victims since day one. I guess Uffe’s involvement in Entombed speaks for itself. His track record goes on and on and I could fill this whole interview with all the stuff he’s done in the past. As for me and Johan… there is not much to say. We used to play in a skate punk band called Falling to pieces that released a couple of records in the mid ’90. I also played in the stoner rock band Chive and more recently indie punk band Destroy all planets.

What do you consider yourselves to be, musically? What makes you so unique?

I wouldn’t say that we are unique in any way. We are three friends that wanted to play music together and we had been talking about it for a couple of years. Finally we got our musical act together, pun intended, and started doing this. Musically we aim for the alternative. We’re a punk band and a hardcore band, only more bluesy.

You’ve played at a mythical place in Stockholm named Kafé 44 – with Victims and Black Whitesnake in 2011. How was it? Did you learn something new? Were you as energetic as you could be?

It was great! We definitely played a good show. I think some people expected something a little more towards what we do in our other bands and we even had some complaints between songs from one tipsy gentleman. That same gentleman was later seen sleeping at the bar before the main act… but all in all we got really good feedback from people after the show.

What do you think about your label De:Nihil, I’ve heard that it’s good? Do you get to have a lot of artistic freedom?

We get all the artistic freedom we want! Complete creative control, from recording to mastering and artwork. We have nothing but enormous love and respect for De:Nihil and we couldn’t have made this great release on any other label.

You’re also going on a tour this summer with Doomriders! Are you stoked? Could you tell me more about it?

Of course we are stoked! We all know each other from past tours and shows so this will be kind of a reunion. We start of at Hellfest in Clisson, France where Doomriders will blow the Frenchmen/women away at 11.40 on Friday, June 15th. Swarm is not playing so we practically start the tour with a day off. Then we head north until we hit Bergen where the tour ends at Bergenfest. Here is the complete schedule:

Why play slow when you can play fast?

Ask Sleep. I bet they have a great answer. I think for us we get all the fast we need in our other bands.

Could you tell me some about your aesthetics? It seems to be inspired by some minimalistic outreach, but maybe I’m wrong?

The minimalistic have always appealed to me and when I did the logos and the cover art for the release the others really liked it. It has the same simplicity in the esthetics that the early hardcore and indie bands from the ’80, that we all like, had. Also, using the sleeve and label the way we have on this release gives the record another dimension that you’ll see when you hold the record in you hands.

What newer albums would you recommend, and which to-be released artifacts should you have your eyes peeled on this year?

Personally I’m looking forward to the new Tragedy release “Darker days ahead”. It’s supposed to be a little different from their previous work. I get to see them at Hellfest and that will be awesome. One new album for me is the Mad Men 12 inch. It’s really good classic US hardcore.

I saw that you’re releasing something new too, what makes this one different from the first one? Could you tell me a little bit about the work behind the songs Born to Ruin and Santiago?

I think that what you refer to as the first one is the digital release of the recording. The release on De:Nihil is on 7 inch vinyl and blows the digital sound out of the water. The sound is magnificently raw and the low end will tear your speakers apart. Literally. Consider this a warning. Born to ruin is actually different on the digital recording. It’s got a long intro that we had to cut from the vinyl release. It just didn’t fit on the record.

Would you consider yourselves to be: a live-band or a studio-band?

I don’t think we know yet. We love being in the studio and on stage but in totally different ways.

The most positive would be the recording and the release, and us being so happy with what we are doing. Getting to spend time with friends is something you value a whole lot more when you have kids. I feel I develop with every rehearsal I do. Musically, I don’t know. I’m old and you cannot teach old dogs new tricks.

What do you think about the music industry in general, has it affected you in any way, shape or form?

Well, the music industry for the kind of music we play and listen to tends to be way cooler than, say, the major labels. That part of the music industry is not even worth discussing because the music released by those labels is so uninteresting. What can be said about it is that it is sad that kids get exposed to that crap and get their brains washed with its often shallow and idiotic lyrics about how important it is to be popular or some other bullshit.

I’m happy I got to interview you! Do you have any words of wisdom that you’ve managed to attain throughout the years?

Do what you love, with love and love people.

What band do you think I should interview next and what would you want me to ask them?

Pig Eyes! They’re also on De:Nihil. Ask Benjamin about his day job and why he loves it so much.