From the northwestern part of the Netherlands comes Sweet Empire a political punk band in the vein of Dag Nasty and Good Riddance with a bit of Descendents. 2011 was a busy year for these guys and since December is all about looking back we decided to just do that. Guitarist Jort and vocalist Rowald take us into the world of anarchy, acoustic festivals and coffee mugs.

So 2011 is almost over, how do you look back on this year personally and bandwise? Was it a decent year? Any goals you didn’t accomplish?

Jort: As a band we’ve never played this many shows in one year before. Of course we also released our first album, which we’re all very proud of. We did our first European mainland tour, which was lots of fun. Personally 2011 was just another year, for the band it has been a great year.
Rowald: I think the album is our personal highlight. We did a lot of stuff this year: went to the UK twice, played our 100th show, released a split EP with Oliver John Ward, besides the album. Personally it’s been a good year too since I finally finished my masterthesis and thus got my master degree in Clinical Psychology. If I look back on it I kind of finished two of my most important life goals: making an LP and graduating university. 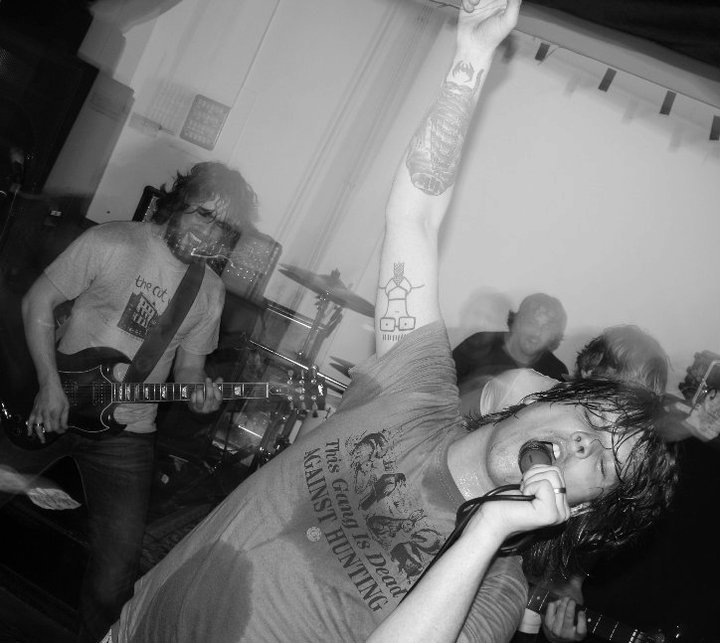 That camping fest was really fun to do and it’s kind of cool that Groezrock stole the idea and got rid of that horrible drum ‘n bass dubstep tent.

In 2011 you guys organized an alternative acoustic fest on the Groezrock camping. Are you planning a law suit against the Groezrock organisors now that they’ve announced an acoustic stage themselves?

J: Haha, we’re not planning a lawsuit. We’re going to organize an acoustic campfest again, and make it even better than previous year. We’ll show them organizers! I didn’t expect it to become that popular and known last year, we got lots of e-mail from people who wanted to play and there was lots of activity on the Internet, for example on Facebook. There’s not much to organize actually, it’s more a collective effort. That’s why it’s so great, there are so many enthusiastic people around who want to get involved, which gives me a great feeling. And now we did it once, we know what to improve. Last year we didn’t know where to do the fest, now we know: the barbeque area haha. So I’m really looking forward to the second edition!

R: That camping fest was really fun to do and it’s kind of cool that Groezrock stole the idea and got rid of that horrible drum ‘n bass dubstep tent. It’s nice to get some credits for it haha. No it was fun, but besides the music involved it’s a nice place to get together, talk/drink, and meet new people.

Besides Sweet Empire some of you are also active booking shows etc. Why did you take up that task as well?

J: Our bookings stuff is called North Empire. We decided to do this because there weren’t that many punk rock shows in the region where we live. We just wanted to have such shows in the area so we decided to set shows up ourselves.

R: I used to do show in De Groote Weiver sometimes, and since that place re-opened in a new venue at the end of 2009 I thought it would be cool to organize gigs again. At that time the Sweet Empire mailbox got more and more emails of bands that wanted to play in the area around Amsterdam. Jort was also doing gigs in De Bakkerij in Castricum and Cafè Lokaal in Heemskerk. We decided to bundle the whole thing into North Empire to ease communication and stuff. We try to focus mostly on touring bands and since the beginning of North Empire we added a few more venues to the first three. It’s basically a non-profit thing we enjoy doing to support cool bands. 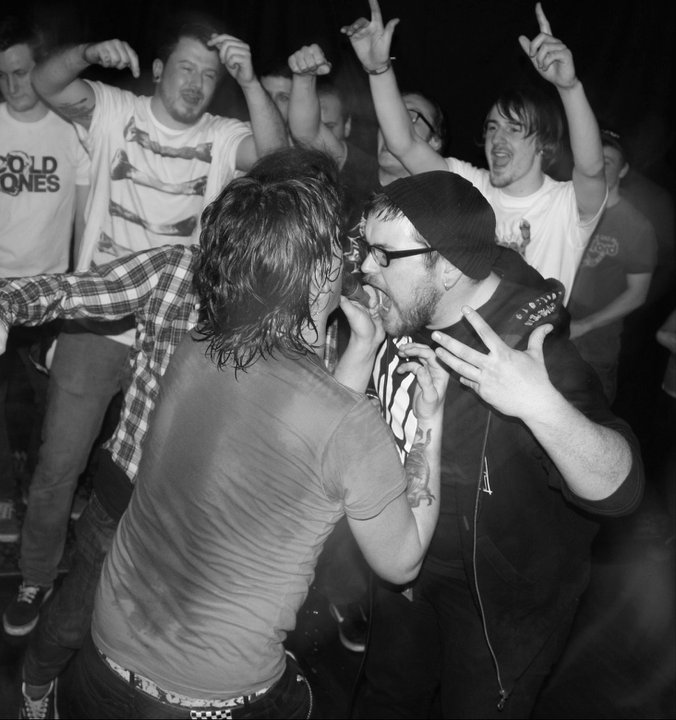 I think the main message of the artwork is that we’re pretty much sick of a certain elite controlling the lives of so many people.

The cover of your record features a General leading his troops. Who’s the General in your band or do you function as a democracy?

R: Haha funny that you pick out the General, I never looked at our artwork that way. I think the main message of the artwork is that we’re pretty much sick of a certain elite (in the artwork the dark castle on the mountain serves as a metaphor) controlling the lives of so many people. The people, or you may call them the army, storm the castle to overthrow the elite’s authority and gain back control. The general, as you call it, is just a pion in the group of rebels and just as equal as the ones carrying sticks or other weaponry.

J: About the functioning of our band; as a matter of fact we do not function at all, it is more anarchy in our band. But seriously, we all have our strong points and weaknesses within the band and try to work with/on that. It’s basically organized like this: Rowald does a lot of shows, Rick does all the artwork, Koen is more the maintenance guy, and I do the financial part of things and I also organize tours and book shows.

One of the songs on the record is inspired Emma Goldman, why did she inspire you guys?

J: Emma being an anarchist and feminist in a very early stage in history inspired us to write a song about her.

R: We wrote the music to that song and Rick came with the idea to base the lyrics on Emma Goldman on whom he did a presentation once in high school. I looked into it and picked out some of her ideas and history and created the lyrics. I may do it again with another inspirational historical figure, who knows. It was kinda cool to really read yourself into a topic before you write lyrics for it. Most of the times a topic just pops up into my head, I write lyrics kind of instinctively with the information I already have. 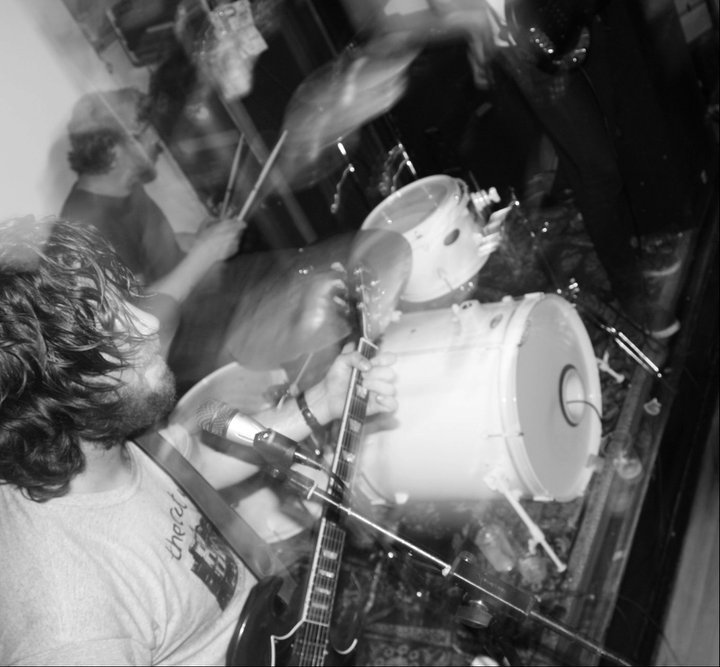 The whole ‘Occupy’ thing happening in the world now is very inspiring to me, the fact that a lot of people want things to change fundamentally.

There’s a lot politics in Sweet Empire’s punk. How important is the message within the lyrics and how do you decide which topic to tackle in which song?

J: Rowald writes all the lyrics, so he decided what to sing about. Though we have lots of discussions in the rehearsal room on what we topics we should tackle, and of course we need to agree, to a certain extent, on what Rowald writes.

R: It’s just like I said before, most of the times a topic just comes up and I start writing. Sometimes you read a certain news article or you stumble upon something in a book, or you see a good documentary that inspires you. The whole ‘Occupy’ thing happening in the world now is very inspiring to me, the fact that a lot of people want things to change fundamentally. To me punk rock and a certain political/social message is very important. Of course I listen to a lot of non-critical music, but having lyrics that actually say something is a definite pre for me.

J: It’s hard to make a top five of songs, whenever. I’m already struggling to make my top 10 albums for 2011, a thing I do every year, a little obsession for me. But to answer your question, I’ll try to name a few, in random order. Politically songs like Propagandhi – America’s Army, Antillectual – Buyer’s Remorse, Crazy Arm – Kith And Kingdom, Cobra Skulls – There’s A Skeleton, The Arrivals – Frontline, amongst others, really do it for me. There are a lot of other bands I listen to, which might not have a clear message, I’ll try to name some more unknown bands in stead of songs. So you all should listen to: Captain Everything!, Crackout, Ringers, Statues, and The Dauntless Elite.

R: Damn, there’s countless of good songs. Jort mentioned some very good bands before so I’ll try to not come up with the same bands. Of course lists change by the day but today my political top 5 is:  Bad Religion – Heaven Is Falling (Bad Religion is my all-time favorite band btw!), Suicide File – Ashcroft, Good Riddance – Yesterdays Headlines, and I can’t forget the best Dutch political song ever made: Welterusten Mijnheer De President by Boudewijn de Groot. The last one of the list can be filled with any random Tragedy or His Hero Is Gone song. Wait… just put Money by Embrace on #5.

A list of five songs with no message whatsoever is impossible for me for I even fill in the weirdest songs with thoughts of my own. So here goes a list of songs that I generally like:  Cave In – Big Riff, Dag Nasty- Circles, Heavens – Countin, Bane – Snakes Among Us, Tes – All Is lost, Rise Against – Everchanging, Planes Mistaken For Stars- Belly Full Of Hell, La Dispute – All Our Bruised Bodies and The Whole Heart Shrinks. Also don’t forget to listen to these bands: Apologies I Have None, Break Character, Pj Bond, Soey and Light Bearer.

J: Hopefully do a lot more touring. We’re already planning a UK tour for January with the Living Daylights (UK). It would be fun to do some new recordings too, maybe a (split) 7″ or something.

R: What Jort says: Play as many shows as possible. I’d like to do a new recording of some sort, possible and EP or split. I’m also pretty stoked about playing new countries and doing weekend tours with other bands and meeting new people. And I’d like to add Sweet Empire coffee mugs to our merchtable haha.