Aside from getting all kinds of useless information shoved through your throat Facebook now and then serves its purpose. The other day someone posted a link to the new The 101’s video. I’ve heard about them before, but never properly checked them out. And when I clicked ‘play’ on that video I didn’t expect much. I knew all the good bands from the Netherlands, right? Wrong. This was pretty damn good. Catchy as hell. And if we can support new bands, we will. So I contacted them and Andy responed to a couple of questions.

Hey, what’s on your mind?

Hey, nothing really. Just thinking of the great weekend we’ve had, playing shows with our new set. And also the music video for our new song called ‘Still Distant’ (see below), which we’ve released recently.. Other than that, we’re doing a great interview with you of course! 🙂

Haha right. We’ll see about that 🙂 Let’s see, you guys aren’t really a ‘new’ band anymore, but recently you stated that after a year of soulsearching you guys are ‘reborn’. So want to tell us a bit about that period?

It was a very interesting period. We we’re writing a lot of new songs and at first we had a really good vibe going on. But after a while of writing and recording a new EP, there were just some things that suddenly didn’t feel right. We were more enthusiastic about the songs before the recording process than after, that’s not a good thing. But we’ve managed to stay positive and instead of falling in a deep hole, we just started writing again. That doesn’t mean it was an easy time for us. No, that time contained more ‘downs’ and less ‘ups’. In our opinion, every band sooner or later will reach that point of “Now what?…”. You have to be a strong group of people to get through such changing moments. And sure.. It wasn’t only the ‘new’ songs we weren’t digging anymore. We just really wanted to see if we could do something better than before. So we began pushing our boundaries a little bit, by writing songs like ‘Still Distant’ for example. 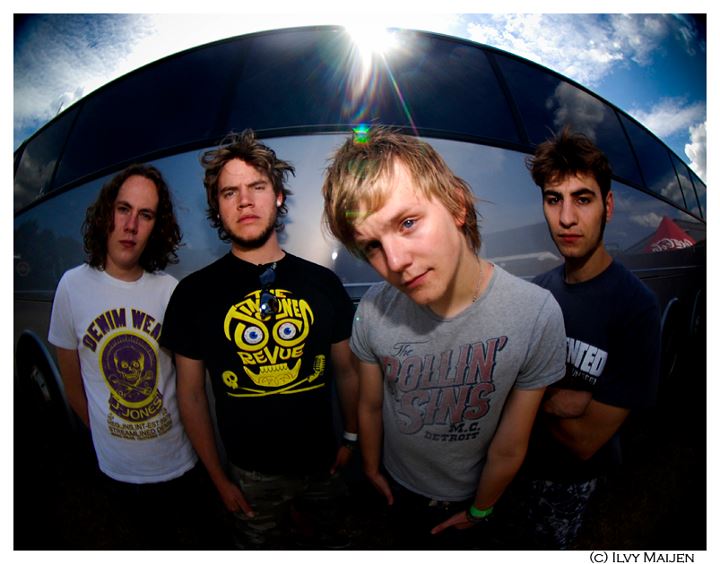 In our opinion, every band sooner or later will reach that point of “Now what?…”. You have to be a strong group of people to get through such changing moments.

Glad you did. That’s a great song. Where the bandname, the 101’s came from? Any good story behind that?

We were always searching for a band name that we all liked, but nobody came up with one. So we were at this old German airfield and there she was… A beautiful Fokker Starfighter F-104G KG 101 (a Cold War combat plane). We don’t like what happened during the Cold War, don’t get us wrong. But we just stood there looking at that number ‘101’. The great thing was that we started nodding to each other, without speaking. We knew that we shared the same thought!

So what or who influences you guys? Not really looking for the bands you mention on the website (Rise Against, Hot Water Music, The Loved Ones), but more what or who inspires you guys.

What inspires us are mainly the bands and artists we are listening to. Of course, everybody has their own musical taste in our band. But we all love punk rock and hardcore.. Maybe it’s because we are together a lot. We’re just always sharing the same interests. Also we get influenced a lot by things that happen around us. Shocking things you see on the news, experiences in your own daily life and things that make you angry just to think about…

So aside from the new song and video ‘Still Distant’, what’s happening for you guys at the moment?

We are still writing for a full-length album. But we wanted to give our listeners a little taste of what they can expect from The 101’s in the near future. We’re not waiting for anything.. We’re doing our thing and hope that there are folks out there, who appreciate what we are doing. It’s great to see when you’re at a show and somebody’s really feeling the same way about your music, as you do yourself! Also it’s great to hit the stage giving everything you’ve got to the crowd.

Besides our upcoming full-length, we are not trying to think that much further about the future. We want to keep making the music we love and hope we get to play shows with other great bands and meet interesting new people. You never know where it all ends, you know.

True. So what are the best memories of the band so far?

We’ve got a lot good memories!.. We once played this show at 013 Tilburg and we got this great dinner. Then.. someone (someone means one of us) stood up and went to the bathroom. After he came back he told us to not go there for at least a few hours (because of, you know..).. but of course people have needs. So after a short amount of time, a girl came by and asked us where the bathroom was. So we told her and she went.. But man.. she was in like 10 or 20 seconds and suddenly we heard this scream and we saw her running away through the hallway. But how could that be? Either that girl was smelling the stench through the walls in the ladies bathroom (which would be very bad). Or she just had to go so bad, that she forgot to read the ‘men’s’ sign on the door. We’re guessing the second. Haha! 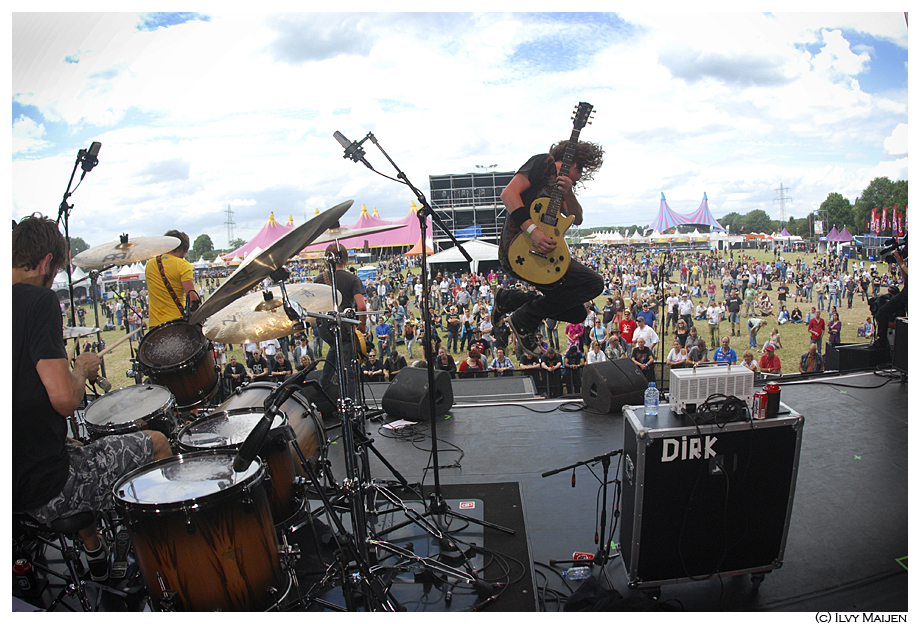 But we just stood there looking at that number ‘101’. The great thing was that we started nodding to each other, without speaking. We knew that we shared the same thought!

Haha I hope so. How about the worst?

From bathroom incidents to very serious issues… We have to say, again, the searching for what we wanted and what we are period that we just came out of. It’s a very frustrating and discouraging thing when you’re working on something with so much energy, but yet always have that bad feeling in the back of your head. You want to do the best you can at that particular moment, but you can’t get satisfaction. It’s hard to go from there to something very opposite. So it was especially difficult for us to throw away an entire EP and throw away the plan about how we thought we’d go further as a band. We had to start all over, which makes you feel very fragile as a group. But it has a positive ring to it.. During this period we got to know each other (and even ourselves) more. And when you’re making that same new start with the same bunch of guys… Then you know, it’s just great to be a part of it.

What’s your favorite The 101’s lyric and why?

There is this little part from our song ‘Sirens’, which is about the problems and agony in this world. While a lot of people just look in another direction, not giving two shits about the misery of others. Only when trouble comes closer, then it will wake them up. It goes like this:

It’s complicated, it’s all a scene
The confrontation’s getting a routine
The unawareness
The people wondering of what could happen
If the situation’s left us broken

I’ll try the old miss universe question again: If you could go back in time and change a single moment in history. What would it be and why?

Hmmm.. Difficult one. There are so many things you can do to make life better for others so that’s a ‘why’… But how.. Maybe tell Oppenheimer he could better be starting a pancake restaurant chain instead of inventing a weapon of mass destruction? How about that? And also, we all get grumpy when we’re hungry, that’s another problem solved!

Smart thinking, solving 2 problems at once haha. When people are done reading this short introduction, what should they remember about you guys?

We hope you’ll remember that The 101’s is a band that does everything from the heart. We put all our effort into it, just to write songs that are meaningful and honest to us and hopefully to you as well. 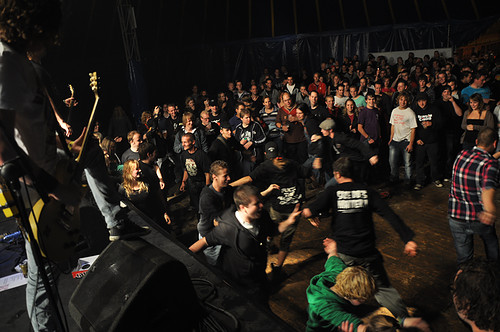 Maybe tell Oppenheimer he could better be starting a pancake restaurant chain instead of inventing a weapon of mass destruction?

Time for you to take control, ask yourselves a question and answer it too. I’m sure you can do better than these generic questions I’ve came up with.

Haha! You’re calling this bad questions? If it were bad questions we wouldn’t be so open to talk about our poo stories and band issues at the same time 😉 We can’t think of any better, sorry! 🙂 Haha!

Haha okay, anything else to add then?

We would like to thank you Pim! It’s great that there are still so much e-zines and other music websites, that give bands the opportunity to present themselves to a bigger audience! We wish you guys the best of luck! Hope to see you all at a show someday soon! Check us out on Facebook and http://www.101s.nl. Thanks!