Jonne Balster on This Is Europe Fest II

Almost three years after the first edition, it’s time for This Is Europe Fest part 2: two stages with some of the best European hardcore bands around. We talked with Jonne Balster (New Morality, Cornered) about what will probably be one hell of an event.

The first edition of This Is Europe Fest took place in 2010. The second edition is taking place in 2013. Was it never your idea to do an annual fest or were there other things that kept you from organizing the fest in past years?

After the first edition I definitely wanted to do a second one. I just didn’t have the time and inspiration to put another edition up.

Over 11 bands are playing how are you going to make sure everyone keeps up with the schedule, bands know where they can place their stuff and where to get food etc? Do you have a whole group of volunteers helping out or are you going to be all over the place?

I’ll definitely be all over the place, since I am a control freak but I guess there will be some people from the venue to point the bands out where to be. Cause we have two stages the logistics are gonna be a bit easier.

It’s quite unusual nowadays to organize a hardcore fest without at least one reuniting band. What do you think about that tendency in the hardcore scene to dwell on the past?

I think it’s a beautiful thing that kids are aware of the past – but please, no dwelling on it. Most reunions are a bit cheesy, but if it’s done ok I don’t really care. The whole concept behind This Is Europe Fest though, is to show TODAY’S bands from Europe (but if a really cool band would unite to play it I wouldn’t say no haha). 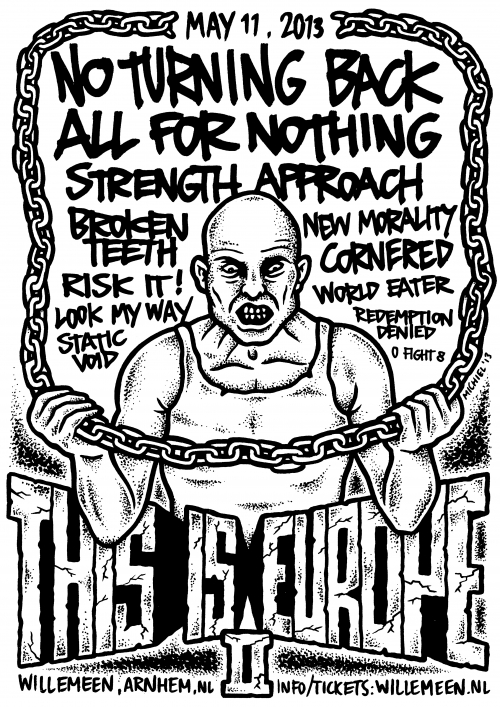 Which bands on TIE Fest are you looking forward to see yourself? Which bands do you think will be able to surprise the crowd?

I though Redemption Denied was pretty awesome the last few time I saw them, so I’m definitely gonna try and watch their set.

You play in both New Morality and Cornered and do shows all over Europe. Is The Netherlands the best place to organize a fest like this? Aren’t there other countries where people are way more into hardcore?

Sure there are places where maybe more kids would come out but I don’t live there.

Which band do you want to play on the third edition of This Is Europe or has setting up the festival been such an ordeal you don’t want to think of a new edition for now?

I don’t wanna set anything in stone, but there’s always the chance of a third edition. First I’ll wait and see how number two’s gonna turn out though.