This Is Hell is probably a name a lot of you are already familiar with, having clocked up the miles touring all over the world during for the last several years. For those of you who haven’t encountered them before, This Is Hell are a hardcore band from Long Island, USA who bring together an eclectic blend of influences from classic NY hardcore to more recent influential melodic bands to produce an end result that I think would appeal to fans of bands like Comeback Kid. Long serving guitarist Rick Jimenez answered my questions. 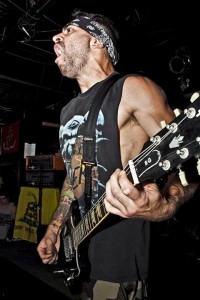 What’s up man. How are you, and what’s new for This Is Hell since we last saw you over in Europe?

Ah, quite a big line up change then? You’ve just just finished another extensive tour of North America, how was that for you? Have kids been going off the to the new material?

Well we’re actually in the midst of it right now. Kids have been pretty siked and thats both awesome and surprising to a certain extent. We stick out a bit on this tour, which isn’t something new for us, but it’s also that much more gratifying when you get not just hardcore and metal kids to thrash with us but also other types of kids that would never had been exposed to us if we weren’t on this tour. The goal is to grab these kids and make sure they stick with us when we do all types of tours.

The last few months have seen you out on the road with a variety of bands, including some of a more metalcore sound. Is it different to touring with hardcore bands?

For the most part, yeah. Attitudes vary from band members, fans, promoters etc. I relate more with hardcore kids and hardcore bands and usually feel more comfortable on hardcore tours, BUT its also way more disappointing when things don’t click on a hardcore tour or when I feel a gap in mindset between hardcore kids. As a hardcore kid I like to think we should all be more enlightened and have a more real view of the world and how to successfully avoid mainstream bullshit and traps but thats not always the case and that bums me out hard. On the other hand, sometimes being on tour with metalcore and other types of bands makes me hate essentially everything about music aside from actually playing my guitar. The whole incorporation of mainstream bullshit and business and music industry psuedo rockstar assholeness… still, after doing this for over 10 years that makes me fucking insane. I can’t deal with deuchebaggery on tour.

Sometimes being on tour with metalcore and other types of bands makes me hate essentially everything about music aside from actually playing my guitar. The whole incorporation of mainstream bullshit and business and music industry psuedo rockstar assholeness…

I can appreciate what you’re saying there. I like to feel that our scene is the antithesis of mainstream pop culture, so it definitely bums me out too when I see kids buying into ‘trends’ and listening to a certain band because of the amount they spent on PR. In an ideal world we’d all have an enlightended viewpoint on the scene and be able to out the people only in it as a business, but I guess we’ve all grown up with consumerism, and it’s bound into every aspect of society now, even anti-culture’s where it has no place. Anyway, the new record Black Mass is out in a few weeks right? As someone who hasn’t heard the majoirty of your recorded output since Sundowning, would you say This Is Hell has changed or matured in this time? I’ve heard rumours about Thrash metal?

Yes, we have matured a ton over the years. We’ve all grown up a ton during this band and also become better at what we do. Lyrics, music, songwriting etc. People latch onto Sundowning because it’s the first thing they heard from us, so in their opinion “Sundowning rules and everything else sucks,” I appreciate anyone likes our past work and its their prerogative to get stuck on the one release. As far as we’re concerned, fixating on one album forever and/or rewriting that same album over and over again is A) the antithesis of why we do music, let alone hardcore, and B) safe but fucking weak. i hate when bands rehash the same shit over and over because they’re afraid of upsetting people. As far as thrash metal, Weight of the World was hinting towards that direction and was a crossover release and we kept on that path with this record. Mixing Thrash Metal and Hardcore to create a crossover sound for This is Hell has been really exciting and we’re all way siked on the new record and the direction we’re going. We still play some old songs and still love them, but we’re not stuck in the past.

Your sound is somewhat different to the classic NY sound. Do you think this makes you more popular at home or have kids struggled to accept it? On a vaguely related note, Vision Of Disorder rules!

It definitely does not make us more popular at home. Home is one of our shittiest spots to play. I love Long Island but as far as TIH shows there, it’s just another stop on tour. VOD does rule though. My favorite LIHC band of all.

If you had to pick one single band, entity, individual or character that has been a big influence on TIH musically and or lyrically, who would it be?

Metallica. I learned to play guitar for real and write songs through Metallica and they were the main influence in me wanting to start a real band. Obviously they weren’t the catalyst in my entrance and devotion to hardcore, but there would have been no steps to hardcore if it wasn’t for Metallica turning me into a metalhead first.

You’ve accomplished a lot as a band over recent years, is there anything you’d still like to do with This Is Hell? Maybe record an ill-advised covers album?

Ill-advised covers album, absolutely. I’m sure people would be bummed with what we chose to cover but fuck them. There are some places we NEED to play that we haven’t yet. Japan being top priority. We’ve never played a show with the Cro-Mags or DRI and that bugs me still.

Anyone adhering to a set of rules that they themselves have not defined is a fool. To put that type of power in someone or some organizations hands is the most absurd thing that I can think of aside from the idea of no free health care.

Do you guys have any specific attitudes towards religion?

Yeah, it stinks. Anyone adhering to a set of rules that they themselves have not defined is a fool. To put that type of power in someone or some organizations hands is the most absurd thing that I can think of aside from the idea of no free health care.

Well NY is #1 in all respects. Music, sports, scenery, culture, history etc. MA and DC though are both unbelievably important as far as music and hardcore go. DC=Bad Brains & Minor Threat. MA=The Hope Conspiracy & American Nightmare. DC being our nations capital makes its history very interesting, especially throughout the 80’s. MA was extremely important in the resurgence of real hardcore in the late 90’s and early 2000’s and spawned some of my favorite bands. NY though… Cro-Mags, Agnostic Front, Anthrax, Biohazard, Life of Agony, Kill Your Idols, The Yankees, Madison Square Garden, WWF/WWE, Jackie Robinson, The Warriors, The Godfather etc.

I’ve always been a firm believer in hardcore being a positive force for change. Hardcore bands have the pedestal and the (at least temporary) attention of thousands of kids around the world. Any subjects close to your heart you’d like to talk about, bearing this in mind? Or anything you never get asked in interviews thats bugging you?

I think its important to discuss (and we do a ton on the new record) race relations, social injustice, freedom of speech and freedom of love, taking notice of people pulling the strings and setting bullshit trends, destroying barriers when they don’t really exist. Most important, i think as a hardcore kid , its extremely important we take notice of when things that should be pure get desecrated and become parodies of themselves through politics and evil motivations.

Band: This Is Hell