If there is any band that has been taking the world by storm it just might be Title Fight. These young guys from Kingston already made quite an impression with their two 7″ but it is the full length ‘ Shed’ that has really put Title Fight on the map. Ned sheds some light on Title Fight’s past, present and future.

‘Shed’ is your first full length. Did you take a different approach to writing songs? Did you want it to be more diverse etc?

We didn’t take a different approach in the actual song writing but we definitely took a different approach in looking at the songs. We have only released songs in EP’s so we had a lot more to do on a full length. We wanted to write songs that could stand up on their own as exiting and interesting songs, but also that they would flow as one stream of thoughts as a full length record. I definitely am guilty of listening to the first couple songs on records and losing interest. We wanted to write a record that is exciting the whole way through. 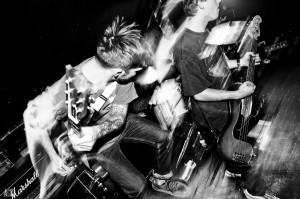 To outsiders your deal with Side One Dummy might be a surprise. Why did you choose to go with them and not with one of the prolific hardcore labels out there?

We had been talking to labels for a while and Side One was just the right fit honestly. We met with them in August and just clicked with them as far as ideals and interests. We had lots of ideas of who we could work with but we wanted it to be the right move, not something that would make us look cool or so we could have a cool logo on the back of our record. That is why we chose Side One.

You guys skipped college to go on tour with your band, do you ever plan to go back and finish your education, any plans of getting a university degree or would you rather be a musician the rest of your lives.

Speaking for myself, I’d like to go back at some point. I am not too stressed on when that would be but I would like to get a degree in something. I’d like to go to school to get an education but I am having a fun experience.

Walter Schreifels produced ‘Shed’, why did you choose to work with him and how was it to work with a ‘hardcore legend’. Did he have any great stories or good tips for you guys?

We chose to work with Walter because he was a good idea man and fun to work with. He had lots of cool stories about Youth of Today tours and Gorilla Biscuits and his Rest In Pieces cassette that was thrown into a river.

You went on tour with Polar Bear Club and Shook Ones in Europe. A package a lot of US kids can only dream about. How do you look back on that tour. Was Europe everything you expected it to be or were you kind of down at certain times being away from your own country.

That tour was pretty wild. We were coming off one of our most successful tours and we were going into a completely new territory so we were a little scared to say the least, but it really was a great trip. I was definitely down at certain times but mainly because we were gone for two months and I threw out my back in London.

A friend of mine asked me ‘How come this band is so popular with hardcore kids’, so how come? Do you have an explanation?

We are a hardcore band.

Some of your merch sells for crazy prices on Ebay. Do you follow that kind of stuff and what do you think of it? You’re known for your limited edition shirts, are you guys collectors yourself as well? What do you collect and what is the most precious thing in your collection?

Yeah I follow the stuff because I am a collector. I collect records and t shirts. I’d my most “precious” items would be my Judge schism shirts or Floorpunch on gold.