CCHC spawned some really cool bands the last couple of years, but I think Wardogs is probably the one I like best so far. I only saw them once, when they opened up CTW Fest in The UK and got an amazing response. I missed them at Break Down The Walls 7 last week, but I’ve read nothing but good things about that set either and the new 7″ pre-orders seem to go fast. In short, time to talk to these ca.. dogs from the UK.

Yo Joe! (He’ll fight for freedom where ever there’s trouble, GI JOE is there…) Let’s start off with the most important question of all. Exactly how much do you love cats?

So what’s up over there? What’s going on in the UK?

Same old shit really, the government is fucking everyone with tax and all that, David Hasselhoff is on TV all the time and I still can’t find vanilla cherry Coke anywhere. As for hardcore in the UK, it’s pretty awesome right now, for the first time in a very long while, there’s a lot of unity between people from all over the UK. The North, London and loads of other places have a really good scene right now. There are some quality bands breaking out all the time and people actually give a shit about bands from here, for the last year or so local bands have been getting a bigger reaction at shows than ones touring from America, that’s pretty strange to see but really cool at the same time.

For people who don’t know. Who’s in the band and how would you describe Wardogs to people if you can’t use the words Outburst, Warzone or Iron Boots?
The band consists of Rofe, Dan, Rich, Pablo and myself Joe. I don’t really know why we get likened to those three bands so much, they’re some of our favourites etc but I don’t really hear it in our music. If I had to describe us I’d probably liken to us some of the early Lockin Out bands but we’ve ripped off a load of different bands, from Brotherhood to Rampage to The Abused etc.

I mentioned those because you used them yourself in B9 topics for instance haha. Anyway, aside from the already sold out demo, you guys just released a 7”. I just heard it and it sounds great, how are the reactions (so far)?
Thanks man, stoked you like it! The reaction for the new stuff has been awesome, we didn’t think it’d be received as well as the demo as people went wild for that and still do but pre-orders for it have been flying out over the last month, CTW have really pushed it and helped us to get heard more, we owe them a lot.

Did you expect this to happen when you were writing songs for that demo? What are the highlights?
No way, we never thought we’d even play more than one show. We started the band just to write a demo and play some music that we wanted to play, the sort of stuff that wasn’t going on in the UK at the time really and generally just have a laugh. Every show we’ve played we’ve had an insane reaction which still continues to blow my mind, it’s the strangest sensation when people are singing along to songs you wrote, most of which whilst watching The Sopranos in my underwear. Our 10th show the other day was in Essen with Death Threat, we’ve been really lucky so far. As for the highlights I’d have to say, every show we’ve played, the friends we’ve made over the last few months, getting in to a lot of trouble and drinking free beer in Germany!

So what’s the one thing people should remember about Wardogs after reading this short ‘interview’?
We just want to play everywhere and drink free beer, we all love Rihanna and we’re good looking guys.

And to step away from the music for a second, if you could change anything in the world right now, what would it be? Remember, world peace can’t be done.
If I had my way, I’d force worldwide governments to put a shit load of money in to third world nations and develop them to a level where they’re not run by madmen and their tribes but instead by people who’ll put food in the stomach of starving children, not bullets in an AK.

What would your perfect show be?
It would be an all night party, Andrew WK would be playing Party Hard in one room over and over whilst wearing a flamingo costume. In the other room, Rihanna would be singing to me whilst naked and covered in strawberry jam begging me to lick it off but I’d deny her advances and go back to partying with my boys and doing shots of Jager through my eye, there would also be an unbelievable amount of weed and a petting zoo consisting of Tigers, Pandas and a Meerkat.

Anything else to add?
SWNK is awesome, The CCHC, Rihanna please reply to my emails and see you all on tour soon.

Here’s an ‘exclusive’ (sounds good right?) MP3 of  the new 7″ that was just released: 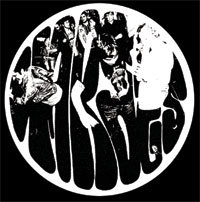 So do the right thing and pre-order/order that 7″ from Carry The Weight Records.

For more songs and info, check their homepage:
http://www.thewardogs.blogspot.com/