Let’s start this off differently for once, anything you guys want to talk about? Anything you need to get off your chest?

Eelco: Not really. I’m just very glad that people seem to like what we’re doing and actually give the bands we release some attention. And its great to get people coming up to our distro and chat about music or tell us how they discovered a band that we released through WRR. Would be great if more people would come to smaller shows though. People seem to be a bit spoiled with a wide choice of local shows and not take that much effort anymore to travel to a good show just because it’s not a well known american band.  Oh and what bothers me is that every ‘bigger’ band nowadays brings along a ton of supports, making it harder for local/starting bands to get a bigger exposure, while very often they really deserve it!

Roelof: Like Eelco says, very grateful for all the attention and support we are getting so far. Can’t wait for all the great releases still to come. And hope we can take this to a new level.

Isn’t that something that’s always been happening though? The more shows there are, the less people go to shows? Or is it worse than before at the moment?

Eelco: Of course it’s always been like that, you can’t be in 2 places at the same time, but it seems – to me at least – people stopped caring a bit more. It’s too far away, they’ve seen it already, or all of a sudden they have serious jobs, girlfriends, kids and fragile hips or so. Maybe that’s it. Maybe i’m just growing up a bit less fast than the others. 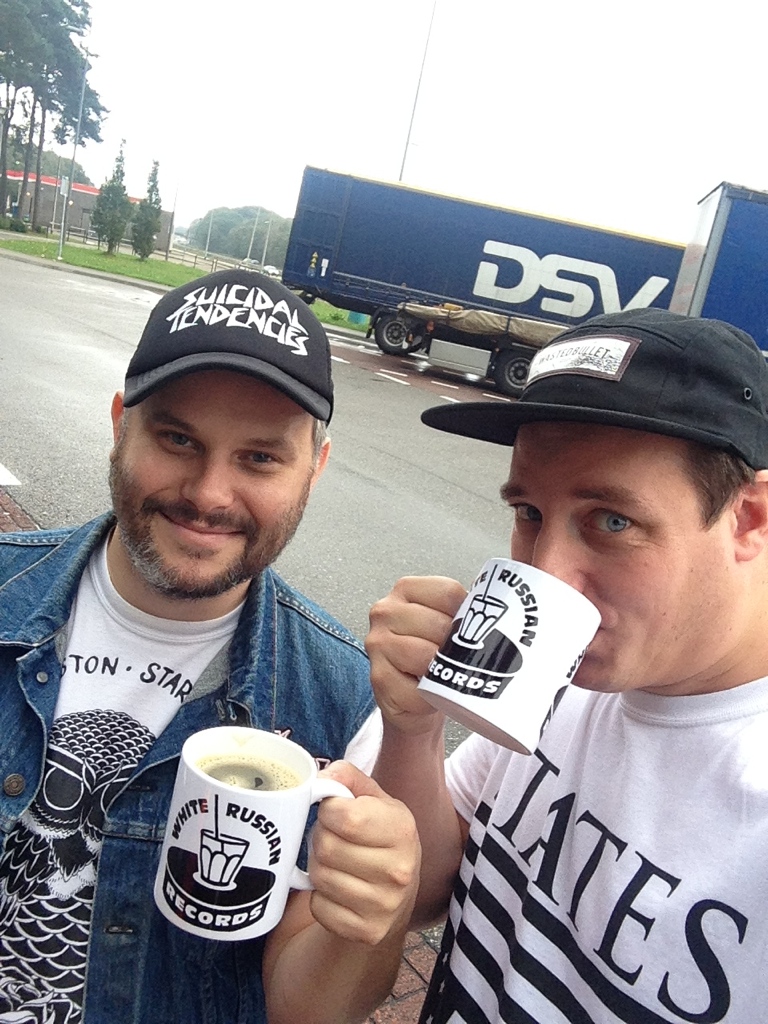 What bothers me is that every ‘bigger’ band nowadays brings along a ton of supports, making it harder for local/starting bands to get a bigger exposure, while very often they really deserve it!

You’re going to stay young until you die Eelco, nothing wrong with that haha. And you mentioned ‘taking it to the next level’ Roelof. What would be the next level if it was up to you?

Roelof: We would like to get even better distribution also abroad. In the Netherlands people know where to find us I guess. For me it would be great if also we get our name out there in more different countries.

Let’s get to you know a bit better. Who’s Roelof, Eelco?

Eelco: Roelof is a friendly (and slightly chaotic) guy who’s really passionate about music and has the same ideas about it as me. Always making some time to help a band and always trying his best to make things happen. And besides that he’s just a great friend who i can talk to for hours about nothing (and about serious stuff). A truly great friend who’s always interested and likes the occasional beer!

Agree with that Roelof?

Roelof: Nice words but slightly chaotic is an understatement haha.

Is it that bad? In what way?

Roelof: Well, we have a to do list and SQUIRL! Like that. haha And then I forgot what I was doing/saying/typing. My mind wanders off all the time. Is that even correct English haha? So that to do list is awesome. I can always read back what I have to do.

And what do you have to say about Eelco, Roelof?

Roelof: He is an immature ADHD 30+ year old who just says whatever comes to mind. REALLY making a lot of bad jokes. But he is also honest and hardworking and one of the friendliest guys I know. Glad he’s one of my best friends!

Eelco: That does sum me up quite well yes haha.

So eeuh… How drunk were you when you decided on the name White Russian Records? Who came up with it anyway?

Eelco:  Haha, not that drunk really. When the idea for the label started i didn’t know Roelof yet, it was me and my friend Bart who wanted to start a label to help the many great bands we knew to get a bit more exposure. We started with some compilations, and needed a name. Being big fans of The Big Lebowski, the name was picked quite fast haha. It’s a good name. Not only because from time to time people ask us if we release music from White Russia, or only russian bands.

What’s the thing nobody knows about White Russian Records?

Eelco: The compilations were called “Change The Station”, as i thought it would be funny, as in the movie The Dude says it to the cabdriver when he plays the eagles. Turns out he doesn’t say it at all; he actually says “Could you please change the channel”.  Don’t think anyone ever realized or noticed! 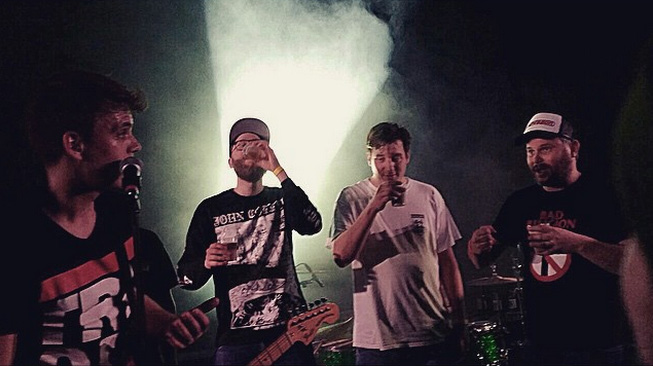 We have a rule that we both really have to like it, or we won’t do it. You can’t release a record and help a band if someone in the team doesn’t like it.

Haha, I sure didn’t. Any other (little) mistakes that in your releases? I know we fucked up the labels of the Said And Done – Endless Roads 7” (Shield Recordings). Whole band and the label totally didn’t see it, until we got the records… Or maybe some other subtle nods that people didn’t get?

Eelco: The first few CD’s all had a very small logo on the spine, at the exact same spot. Thought it’d be cool if they’d all have that but i stopped it after a while (didn’t fit the designs). There’s no really embarrassing stories i think. Other than maybe a misnumbered tracklisting on one of the compilations.

What’s the thing you’re the most proud of that you achieved with White Russian Records?

Roelof:  I got us showcases on Jera On Air, ESNS. Especially Jera. Two years ago it was first time they did this and we were able to fill the whole friday with our bands. That was pretty awesome. Also we released some great records. And I am super proud that bands like Call It Off and The 101’s are really doing well in The Netherlands, but also in other countries as well. I know that this is not our achievement, but still it’s great to see a band you released a record off playing a festival like Groezrock. To me that is unreal.

Eelco: The fact that we’re still going with this and the bands are doing well, and the label gets great  attention, but see Roelofs answer for what i mean with that haha.

What release would you guys have loved to release on White Russian Records if you had the chance? And why? Could be anything. You both have to agree on it though.

Eelco: That’s hard. Roelof and I both are very much interested in lots of music. Obviously we both like our share of hardcore and punkrock, but we also enjoy a lot of mellower stuff. Roelof is a big fan of singer/songwriters, I am a big fan of black metal and grindcore. We also both enjoy jazz and blues. So that’s gonna be hard. One of my alltime favorite albums is Brand New’s “The Devil And God Are Raging Inside Me”. I think that would be a safe answer. it has the best of a lot of things i like. Not sure what Roelof thinks though!

Roelof: Well that’s funny cause we had to agree. And I called Eelco to say we should pick Brand New’s “The Devil And God Are Raging Inside Me”. He already put it up here. So yet again we think the same.

Nice pick, I put Sowing Season on my mixtapes now and then. How do you guys pick bands for White Russian Records? What does it take?

Eelco: We have a rule that we both really have to like it, or we won’t do it. You can’t release a record and help a band if someone in the team doesn’t like it. One of our friends Gert-Jan helps us with a ton of things too, so we often ask his opinion as well.

Roelof: A good fucking record! We ALWAYS listen to everything. It doesn’t have to be the master yet. But it does help if you send in decent recordings. Not something you recorded with your phone. Also give us information about your band. What you did in the past but also what are your future plans and all that. And we all have to like it. If we don’t think we can give our 100% of our time and interest in a band, we won’t do it.

So what’s coming up with White Russian Records at the moment? Any big plans brewing?

Eelco: Working hard on The Kendolls – that release is really great, and they have a good setup. Dealing with some new bands as well that i have high hopes for, but nothing has been announced yet.

Roelof: We got the release of The Kendolls coming up in October. And some other bands we are talking to as well.

I would get to sleep at night and do this during the day, rather then do it at night haha.

What’s the most important thing in your lives right now?

Roelof: My family. I love my kids!

Eelco: The usual; band, girlfriend and this great label we’re trying to run!

You can’t put 3 things as the most important thing in your live right now Eelco, be a man, make a pick! Just make sure either your band, girlfriend or Roelof (you’ll figure out a way) reads this interview.

Eelco: Bastard! Roelof got to pick 3 things (2 kids and a wife!). The most important thing in my life would be music then. There’s music around me all day long, I play guitar every day, I have a band that I rehearse with and do shows with regularly, the label is a daily thing and my serious day-job is also for a record label. So basically everything I do revolves around music. Oh, and in my spare time (is there any left I sometimes wonder) i go to shows and festivals. So music it is.

Haha sorry, you could have said family too and counted your band and girlfriend of course haha. Anyway, if you had the chance would you like to do White Russian as a full-time thing?

Eelco: If that means we have to share an office with a good coffee-machine, a fridge with beers, a record player to blast music all day long and work with bands we love? Of course! We’d probably have a ton of fun together! (and get work done too!)

Would you do anything differently?

Eelco: I would get to sleep at night and do this during the day, rather then do it at night haha.

Roelof: For me not really I guess. The only difference would be that we have more time. And we would share an office haha. But we are still the same guys. Having a laugh and checking out and releasing awesome bands.

I guess that’s it, I’m all out of questions. Any last words?

Eelco: To all of those who complain about shitty records, not enough shows, bad magazines or whatever; stop whining, get off your ass and do it yourself!

Oh and Roelof and I have been getting quite some help from some great people. Gert-Jan, Frank & Walter. Great guys, and they’ve been great help!

Roelof: Go support your scene. Whether it’s going to a show, buying merch, ordering records from small labels. Or even set up a show. It’s fun doing this stuff we do.