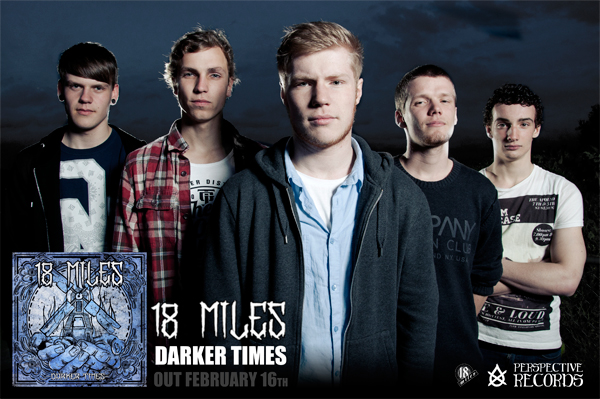 Everyone, please welcome the newest addition to the Perspective family, 18 MILES! This is our first band from The Netherlands and we are very happy to have them aboard. 18 MILES is a young and refreshing metallic hardcore formation with a distinctive sound and character. When the band was formed in 2010, the band members lived in the smaller towns Uitgeest and Heerhugowaard. For this reason their band name was born. The distance between the separate members was 18 miles.

In 2011 they released a first EP called “Lessons”. They did the production and the release of this album completely DIY. Now, almost 2 years later they have finished the recording of their sophomore album called “Darker Times” which is ready for release via Perspective Records on February 16th. “Darker Times” will again be fully produced by vocalist Daan Nieboer. Expect an album containing 11 songs of charging drums, lightning fast riffs and devastating breakdowns. Below you can find their first music video for ‘Pushing Forward’ in co-operation with No Sweat Productions. On 16.02.2013 they will be releasing a second video for “Die Strong”. Both tracks will also appear on the upcoming record. All fans are invited to pre-order the album starting today by going to our webshop HERE.

18 MILES has planned some release shows for “Darker Times” in The Netherlands and Germany. The official release show will be on 21.02.2013 @ Winston Kingdom in Amsterdam (Facebook EVENT). They are also confirmed for this years “Hageland Punk And Hardcore Fest” in Aarschot and we’ve added them to the line-up of our own “Perspective Fest II” in Leuven.

Read the 18 MILES statement below: