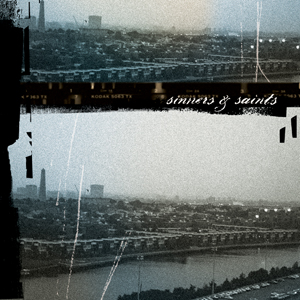 It took them ten years but Bridge has finally announced a vinyl release for Sinners and Saints ‘The Sky Is Falling’:

Sinners and Saints front men (and brothers) Rob and Mark Lind are both battle-scarred vets of the punk rock trenches with an impeccable pedigree to boast. Elder brother Rob is the founding member and main man (i.e. sole song-writer and lyricist) for infamous ultra-hardcore legends Blood For Blood, a band known as much for their violent live reactions and the fanatic devotion of their listeners as they were for their furious anthems and the brutally honest darkness of their lyrics.  Rob, who is also the founding member and sole songwriter of the notorious “terror-core” band Ramallah (a band mostly known for their virulent cult following), is as known for his off-stage lifestyle as he is for his many musical endeavors.  Younger brother Mark is the founding member and song-writer of the Boston street punk legends the Ducky Boys, whose working class anthems, chugging rock and roll, and painfully personal lyrics have inspired and resonated with a devoted cult-following of his own (Mark is also the main man behind Boston rock n’ roll bulwarks and staples Dirty Water and Mark Lind And The Unloved).

Back in 2000, after the simultaneous demise of their current bands at the time, the brothers decided to reach back into their roots, and create the kind of rock and roll they grew up with which would be known as Sinners and Saints.  Upon their inception, the band was highly regarded from fans and critics alike.  Their debut album, The Sky Is Falling, was released on Bridge Nine in late May of 2002 and in support of it, they went on to play shows with bands like Social Distortion and the Mighty Mighty Bosstones.  Unfortunately, Sinners and Saints broke up due to personal matters in late 2002.  The Sky is Falling was never released on vinyl format and the band has remained dormant ever since.

Now, Bridge Nine Records is excited to announce that they’ll release The Sky Is Falling for the first time ever on vinyl format on June 4th, 2013.

Check out the whole record here: