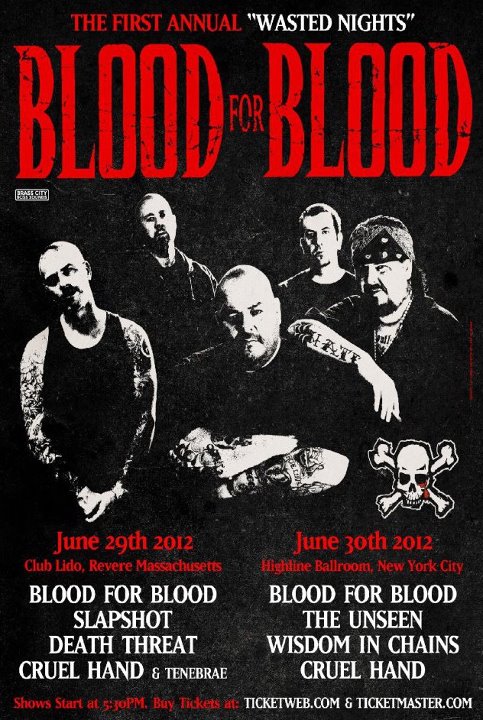 For reasons not fully disclosed (aside from some vicious rumours floating around the internet about Buddha being involved in some nasty business, that have yet to be confirmed), Blood for Blood has cancelled/postponed the so called ‘Wasted Nights’ shows the band was going to play In Boston (June 29th) and New York City (June 30th). The band planned to make this a series of annual events. Here’s the official statement from their Facebook site:

BLOOD FOR BLOOD has been forced to reschedule this upcoming weekend’s “Wasted Nights” shows in Boston and NYC.

Guitarist/vocalist Rob Lind and bassist Ian McFarland issued the following statement:
“We regret to inform you, due to a situation that has arisen involving Buddha, it has become impossible for Blood For Blood to play the shows scheduled for this weekend in Boston and NYC. We’d like to thank and apologize to everyone who brought these shows together, as well as all of the Wasted Youth Crew, who were planning on attending. Trust us, this was not something we wanted to do.”

Refunds will be available at point of purchase.”