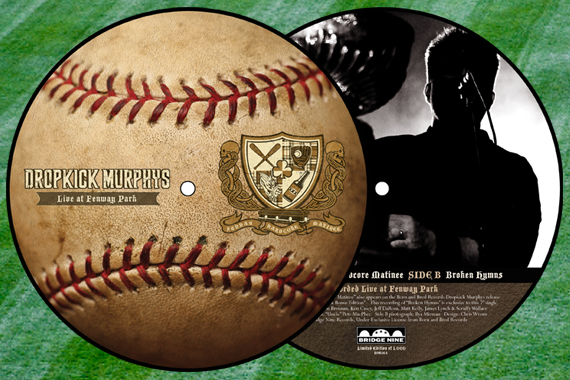 Bridge Nine Records and The Dropkick Murphys are excited to finally announce a collaboration between the two Bostonian companies – a limited edition picture disc 7inch available exclusively through the band and B9Store.com. As announced today, this special 7inch will be limited to 1,000 copies and will feature two tracks recorded live from DKM’s sold out Fenway Park shows from September of 2011. Side A will contain “Sunday Hardcore Matinee”, live, from their Going Out In Style album, while Side B will boast the live track “Broken Hymns”. Bridge Nine owner Chris Wrenn commented, “Working with the DKM’s has been a long time in the making. We’ve all been longtime supporters of the band over here; having seen them at the afternoon matinee shows at the Rat in Kenmore Square many years ago. B9 and our affiliated companies have even done charity work with Ken Casey’s Claddagh Fund. Literally could not be more excited to partner up with the band for this release and can’t wait for everyone to hear it.”

The Dropkick Murphy’s, now in their 16th year as a band, have risen from their basic Irish-punk roots to become a rocking and rolling, raging, green-shamrock machine. Dropkick Murphys are now one of the best-known rock bands in the world, thanks in part to their ability to tap into the working-class and sports fan culture that permeates Boston and the New England area – which makes their collaboration with MA’s Bridge Nine Records even more relevant. DKM bassist/vocalist Ken Casey commented, “It’s been a while since we’ve done a cool limited edition 7 inch. It feels like the old days when we had so many different pressings of limited vinyl I couldn’t even keep up with all the colors and different artwork, etc. It’s great to be doing something fun again with a great local label like Bridge Nine.” Look for the Sunday Hardcore Matinee 7inch to be available just after St. Patrick’s Day, on March 20th to be exact, via the Dropkick Murphys and Bridge Nine Records direct.

Pre-order the Sunday Hardcore Matinee picture disc now at www.B9store.com/DropkickMurphys and check out the Dropkick Murphys online at www.DropkickMurphys.com.