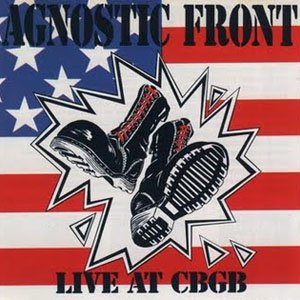 In conjunction with legendary NYHC band Agnostic Front’s 30th anniversary shows in June and July, where they’ll be playing their classic record Live at CBGB from start to finish, Bridge Nine Records has announced today that the label will be reissuing said record on July 17th. Featuring an embossed LP cover with the original Live at CBGB artwork, the label will also be pressing the music on super limited edition red, white and blue striped vinyl with multiple other colorways available. Agnostic Front vocalist Roger Miret said, “With this year being our 30 year anniversary as a band with myself singing I wanted to play a special show here and there so I came up with the idea of playing our classic Live At CBGB set. This was the set front to back from our legendary live recording released in 1989. That was a magical time for the band and Hardcore was thriving at it’s best in 1988 when it was recorded. As an honorable family member with the Bridge Nine crew, I knew that the label should be home to this special re-release as much as CBGB was home to Agnostic Front. We are making this re-release very special for the record collector in a red, white and blue color and our timeless original cover embossed to add that punch it held back in 1989 as intense today in 2012! Along with this special re-release we are doing a handful of special shows in the U.S. to coordinate with the release. This will be a great release team effort with Agnostic Front and Bridge Nine… here it is – the glory days of 1988 New York City Hardcore as relevant today, tomorrow and forever!”

Originally released in1989, Live at CBGB contains 19 of Agnostic Front’s most notorious tracks. Allmusic said, “Recorded in the flesh at New York’s punk rock Mecca CBGB in August of 1988, Live at CBGB captures the band in all its ferocious glory. As Miret announces ‘this is the title track from our first album Victim in Pain, the song’s also called ‘Victim in Pain’,” the band is off. ‘Pain’ is quickly followed by ‘Public Assistance’ and later a song that calls for unity between punks and skins, ‘United Blood.’ The recording is highlighted by the band’s hardcore anthem, ‘Crucified’. Beneath all the band’s political lambasting and calls for unity (although many of their shows were anything but), there’s a good musical lesson to be learned from all of this. Because, if you’ve ever been just the slightly bit curious about what NYHC is all about, this release is a solid launching point.” We couldn’t have said it better ourselves.

Pre-order information and release details for Bridge Nine’s re-issue of Live at CBGB will be coming soon. In the meantime, check out Agnostic Front’s 30th Anniversary show listing and Live at CBGB track listing below.