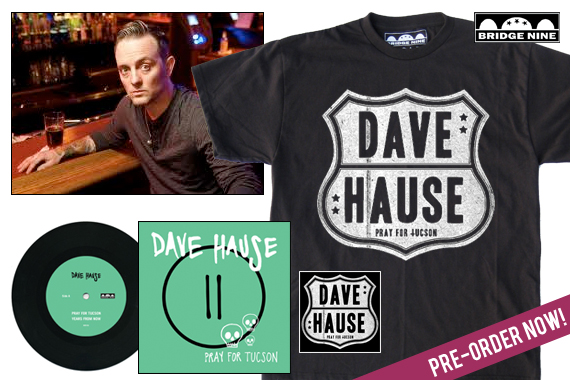 Slated for a June 19th release through Bridge Nine, Pray for Tucson, the new 7inch in the Dave Hause 7inch series, is available for pre-order now in the B9Store. In celebration of this pre-order, you can stream the eponymous track from the 7inch right now:

Raised in a musical family, Philadelphia native Dave Hause has been involved with music as far back as he can remember. He began his musical career as a roadie, and later shared his own musical stylings in various punk bands. Eventually Dave formed The Loved Ones, who have released two full length records and several EP’s. While The Loved Ones are still in existence, their touring schedule has waned and afforded Dave more time to work on solo material. Dave’s solo debut Resolutions was released in 2011 and showcases his wide range of influences, everyone from Patty Griffin to Paul Westerberg. Dave is excited about where his current path is leading him. Throughout the course of the year, Dave will be releasing 7inches on various independent labels including Side One Dummy, Jade Tree Chunksaah, and Bridge Nine amongst others. Additionally, Dave will be on tour in support of the Gaslight Anthem this July – tour dates are below.

Bands: Dave Hause, The Loved Ones