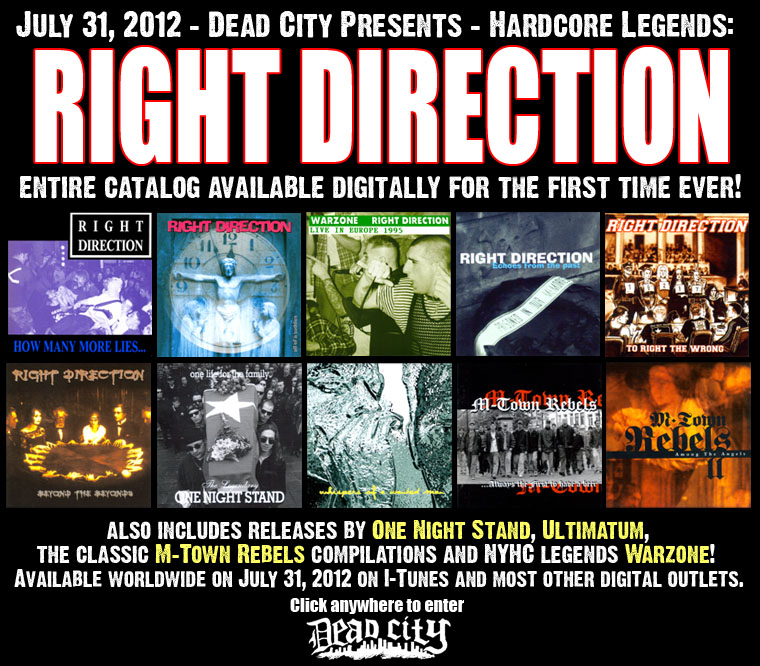 All of the bands/records come courtesy of the various musical endeavors of iconic European hardcore front man, Dave Reumers, over the course of more than a decade. These 10 pivotal hardcore releases will be available digitally for the first time ever on July 31st.

This music was released between 1989 and 2002. I’ve wasted half my life screaming nonsense into a mic thinking I was Mick Jagger, but I wouldn’t have done it any other way. I’m glad I was part of this and I was lucky to be in so many bands that helped spread the hardcore, punk, and metal sound throughout Europe in the early days. If you still dig our music in this day and age there’s no hope for you anymore. Enjoy!

Right Direction CDs and LPs have been out-of-print and impossible to find for years, and it is an honor for me to make these releases available digitally for the first time ever. As one of the forefathers of the European Hardcore Movement, Right Direction and all bands related to the M-Town Holland scene have always provided us with top notch music. While taking influences from early American punk, hardcore, and metal bands, I always found Right Direction ahead of their time when it came to talented musicianship and amazing vocals and lyrics. Truly a diverse band and am amazing group of guys I am proud to call my friends.

The full back catalogue to be digitally released for the first time ever is:

The driving force behind Reumers’s impact on the worldwide hardcore scene, Right Direction, formed in 1989 when hardcore and thrash metal were first becoming a major force in Europe. Right Direction’s original blend of hardcore and metal with rough, yet melodic vocals has been an influence on countless hardcore, punk and metal bands around the globe. The group is widely considered the first major European hardcore band. Aside from Right Direction, Reumers, went on to form One Night Stand, a classic, old school hardcore/Oi group featuring members of Right Direction and Backfire, as well as a solo acoustic project, Ultimatum.

He was also a leader in the M-Town Rebels, an army of local hardcore kids from Maastricht, Holland who took Europe by storm by creating and supporting hundreds of bands that traveled through the Continent. The M-Town scene spawned two compilation albums, showcasing the passion that flourished within the M-Town community.

All of Reumers’s work and dedication to European hardcore, and hardcore in general, will be paid tribute to with the digital release of these 10 classic albums later this summer.

Stay tuned to DeadCityRecords.com for the latest info.