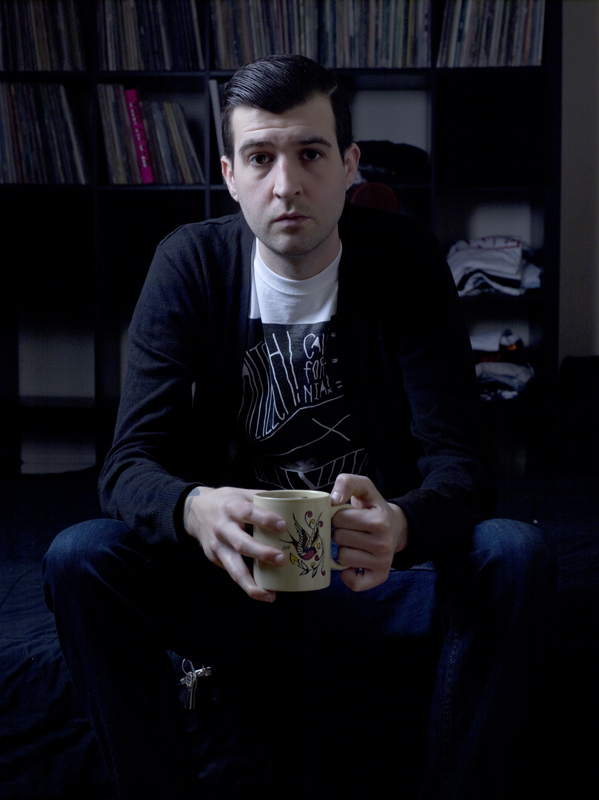 Singer/songwriter Derek Archambault is no stranger to the spotlight; he has spent the last 4 years on tour with progressive hardcore/punk band Defeater, and has had a solo project called Alcoa going for even longer. After countless years of keeping Alcoa on the backburner, this project will finally have a debut full-length album see the light of day in 2012.

Derek Archambault’s love affair with music started at a very young age, as his parents were huge fans of music and constantly surrounded him with it. Derek started to attend concerts at the young age of four or five, and cites artists such as The Clash, Bruce Springsteen and Todd Rundgren as life-long influences. He commented, “Those are the three big ones that still influence me and bring back the best and earliest memories of falling in love with music. They all have such unique styles that weigh heavily on how I approach a lot of what I do musically. The story-telling of Bruce, the pure pop and hooks from Rundgren, and the ability to grow musically yet somehow still be at the forefront of punk like The Clash are all things I admire so much and have attempted to imitate in one way or another.” As an actual musician, Derek got his start at age thirteen, when he picked up drumsticks and eventually moved on to guitar a couple of years later. He joined a few bands around his hometown of Portsmouth, NH, and “…wanted to be Oasis or the Beatles… with a real heavy dose of Bob Dylan thrown in.” These influences are still prevalent in Derek’s writing today, and have helped shape the songwriter he has become.

Derek’s solo project, Alcoa, started while he was on tour with one of his many bands back in 2002. At that time, he found himself listening to more and more artists like Gram Parsons, Elliot Smith, Johnny Cash, Rocky Votolato, and Ryan Adams and “…wanted so badly to be able to write songs like that. I didn’t know how to at all, but it didn’t stop me from trying and churning out a bunch of shitty songs that I was too afraid to sing. One day, while driving through Alcoa, TN, I decided on the name and started the process of figuring out how to not write a loud punk or four-chord jangly pop song.” Derek honed his writing skills, released a few demo recordings as Alcoa, then the project took the backseat to his other musical endeavors at the time.

Over the course of the next few years, Derek played various instruments in various bands before landing the role as vocalist for an up-and-coming band from Boston called Defeater. Since their inception in 2008, Defeater has been the main priority for Derek; the band has toured the U.S. and Europe several times over and have released three albums on indie powerhouse Bridge Nine Records. In 2011, Defeater released their landmark double LP Empty Days & Sleepless Nights, which features one album of punk/hardcore anthems, and another album that’s a 4-song acoustic effort that put a lot of emphasis on Derek’s actual singing ability. Derek went on to say, “Defeater had done an acoustic track on our first full-length, Travels, that was received really well by fans. Singing that song almost every night for two years, then releasing the acoustic album on Empty Days, definitely made me much more comfortable with my voice.” These things, coupled with inspiration to write and desire to record, gave Derek the confidence he needed to pursue Alcoa as a more serious undertaking. And throughout such a busy time on the road and writing and recording with Defeater, Derek took some time to get a few more demos done as Alcoa. He commented, “I’ve always tried to keep Alcoa stuff with me while on the road over the last ten or so years. Most recently, I sold the newest demo on the Defeater U.S. tour with Bane and along our European tour as well.” The last 4-song Alcoa demo was pressed onto a few hundred CD’s and sold out on the road, with the awareness and demand for more Alcoa music at an all-time high.

In early spring of 2012, Derek started recording the Alcoa full-length in and around Portsmouth, NH. He, along with Aaron Neveu, started laying down these tracks that are set to become Alcoa’s soon-to-be titled LP. “Aaron and I are both big fans of 60’s soul recordings and what the Dap-Tone label has done in the last ten years, so we wanted to give it a shot and have it sound like something between those and Springsteen’s Wild, Innocent… record”, he said. While the album is still being finished, there are plans to have instrumentation such as upright bass, banjo, fiddle, pedal steel and piano/organ, with some more surprises thrown in along the way. Jay Maas of Getaway Recording (also of Defeater, coincidentally), will be at the helm for recording vocal tracks and mastering. This debut album will feature eleven tracks plus b-sides and has “…a few songs I’ve been fucking around with for the past few years, and the rest is new stuff written specifically for this record. I wanted to try out what it would be like to be a real band, so I wrote as we’ve been recording it.” He continued, “I hope I don’t hate it in ten years… or in a year for that matter. Specifically, I hope I can just grow from here.”

Derek’s goals for Alcoa will remain the same as they were since day one: put out albums and tour as if it was a punk/hardcore band. He said, “I want to play house shows, halls, D.I.Y. tours, play with friends’ bands. I don’t expect much – I just want to put together a band of good friends, get in a van with some more, and play in front of the rest. That’ll make me happy.” He continued, “I’ve been telling myself for about ten years that I’m going to put out a record under the Alcoa moniker, and now that I’ve gotten a lot more comfortable with my voice, it seemed like now was as good a time as ever. It took me eight or nine years to write a bunch of songs no one will ever hear and only play a handful of shows to finally get my act together.”

To get an idea of how it sounds, check these demo’s from the most recent demo he did: