Devil In Me joins GSR 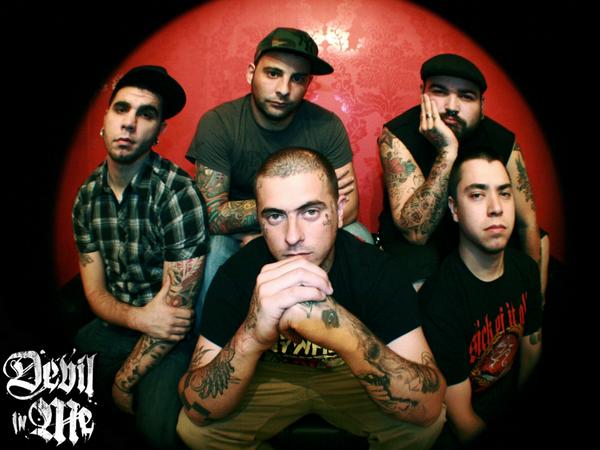 Portugal’s Devil In Me joins GSR. A new record produced by Comeback Kid’s Andrew Neufeld will be released soon:

Although we’re in the middle of the busiest period ever in the GSR Music history with releases from the GSR veterans Kickback, Backfire! and Knuckledust, as well as GSR’s rising stars All For Nothing and Strength Approach, we most definitely couldn’t let go the opportunity to sign Portugal’s leading Hardcore band Devil in Me.
Devil In Me’s well balanced mix of Hardcore and Punkrock, their catchy sound, which reminds at bands like H2O, Sick of it All and Misfits matches perfectly in the GSR Music roster. Besides that, Devil in Me’s passionate, energetic and convincing live performance is a real smack in the face, wakin’ up everybody who thought hardcore was about to die! Last year they toured Europe with Madball and Born from Pain, as well as with Comeback Kid, and finished 2011 with another European tour with Wisdom in Chains. Hungry as they are, they’ll hit the stages again in March 2012 on the Rebellion tour, together with Roma’s label mates Strength Approach, alongside the NYHC legends Madball and H2O and awesome bands like First Blood and Deez Nuts.

The End is the title of a new beginning for Devil In Me and GSR Music; a 13 track album which will be out February 24th on GSR Music.

Bio:
When Devil in Me started as a studio project in the summer of 2004, they could never imagine that it would become one of the most promising forces in the underground music nowadays, in Europe. In five years, this four piece from Portugal, released two successful albums, a DVD, made several European tours and a Canadian tour, and shared stage with most of the bands in the world’s underground scene.
They are now preparing to release their third original work, worldwide through GSR. This time, a disc of conceptual nature. “The End” brings us visions of itself. Not only in the content in the lyrics, but also what the songs breath. It’s an intense, continuous display of power that is perfectly transported to the stage, with their sour/sweet approach to performance and writing.
Produced by Andrew Neufeld (Comeback Kid), it’s filled with sweeping melodies mixed with fast and aggressive punk-hardcore riffs, which promises to capture even the most septic.
These are the contents of another pure DIM album, straight from the heart.

Stay tuned for more details about the new album, mp3’s, a brand new clip and the pre-order campaign in a few days; till then, enjoy this video:

Bands: Devil In Me, Comeback Kid